Industrial production in the eurozone rose sharply in May, but survey data indicate that the improvement will be short-lived.

Official Eurostat data showed industrial production surging 0.9% in May, rebounding after declines in the prior two months. The narrower definition of manufacturing output showed a similar 0.9% rise, likewise recovering from falls in March and April.

The better data raise the question of whether the region is now set for a strengthening of production growth, or whether the May improvement represents a false dawn. Given the recent ongoing weakness of the PMI survey data for manufacturing, the latter looks more likely. The Eurozone PMI manufacturing output index remained in territory indicative of falling factory production in June, and has now been in negative territory for five successive months. 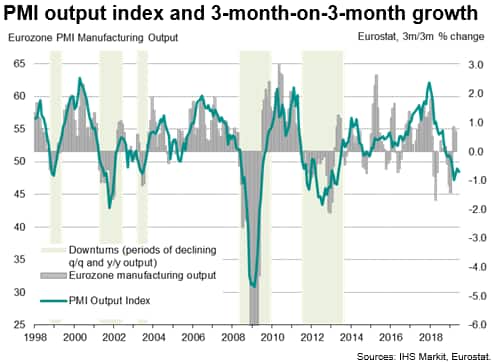 Such volatility in the official data is relatively common, and one of the advantages of the PMI is that the smoother survey data tend to cut through the noise of the official data, providing a reliable steer on the underlying rate of growth, or contraction.

In this respect, the chart also highlights how the current low readings of the PMI are typically consistent with a period of substantial downturn, the likes of which have only previously been seen five times in the past 20 years (defined here as episodes when the official output series weaken sufficiently to push it below levels of a year ago for a sustained length of time).

This is borne out by our second chart, which plots the same PMI output index against the annual rate of change in the official data. The chart shows that the PMI is indicative of output falling in year-on-year terms, which is in fact similar to the signal from the latest official data: despite the 0.9% monthly rise in May, the Eurostat estimate of output remained 0.7% below levels of a year ago. 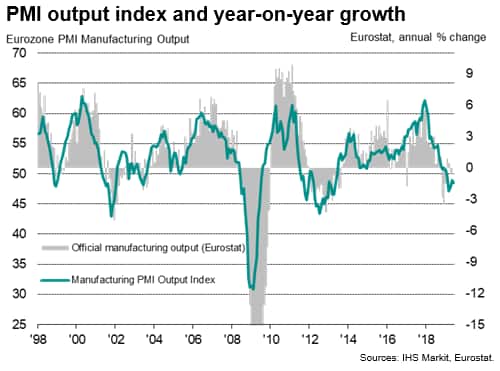 Turning to June, we can elaborate on the relationship shown in the second chart by using regression analysis to gain a better insight into what the June PMI reading translates into in terms of the annual rate of growth (the PMI index is simply used as the sole explanatory variable in an OLS regression, based on 2012 to the end of 2018). The implied GDP growth rate from the PMI is shown charted against the actual growth rate in the third chart. 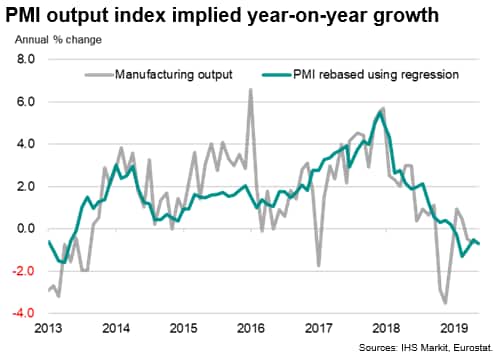 The PMI therefore hints strongly that manufacturing output will therefore fall back into decline in June after the 0.9% surge in May. Note also that the survey's forward-looking new orders to inventory ratio fell further in June, down to one of lowest since 2012, adding to signs that the factory sector remains far from recovery-mode, and that further disappointing data lie ahead in the near-term at least.