The European Commission has announced proposed legislation that will see a 55% reduction in light vehicle emissions from 2021 until 2030, with a transition to a 100% reduction by 2035 also part of the proposals.

The proposal for light vehicles is part of a wider package of measures from the European Commission relating to its 'Fit for 55' package of legislation aimed at slashing greenhouse gas emissions across the European Union by 55% by 2030. As a consequence, if the proposal is ratified by the European parliament, it will mean that all new cars registered by 2035 will be zero emission vehicles (ZEVs), while it also effectively amounts to a ban on ICE vehicles in all but name by that point.

This will have massive implications for the electrification strategies of the major OEMs operating in the EU market. Below, we present data for passenger car powertrain type market share in EU by 2030 as a result of the 55% CO2 reduction target. 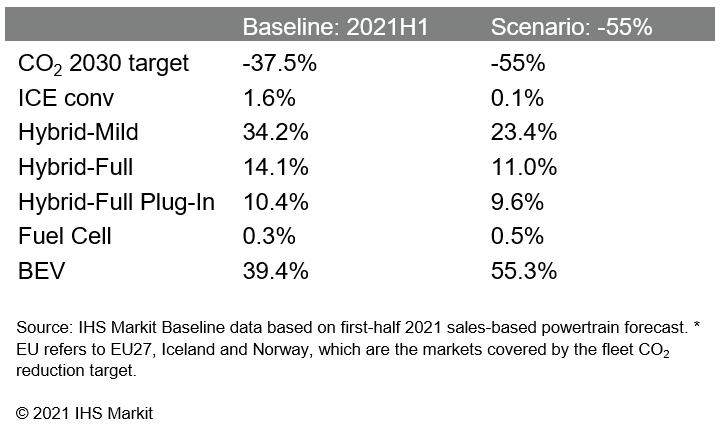 The data highlight the far greater emphasis on BEVs under this new proposal. A 39.4% BEV share was forecast to be required to meet the 37.5% reduction in CO2 by 2030 in the EU. Under the 55% CO2 reduction scenario this share is expected to reach 55.3%.

This acceleration of electrification across the EU will not only affect OEMs. The market for lithium-ion batteries in the EU (for passenger cars) would evolve, as the demand in 2030 would be pushed from 354 GWh for the current 37.5% reduction target to 468 GWh for the proposed 55% reduction target.

Such scenarios will also have a marked impact on some Tier 1 supplier business strategies as the demand for components for traditional internal combustion engine (ICE) powertrains will of course drop off at faster rate than anticipated under the original 37.5% reduction target. Indeed, rather than 60.3% of passenger car registrations in the EU still using ICE by 2030, only 44.2% would use them under the 55% reduction proposal.

It should also be noted that these will not be the final targets and there is likely to be plenty of discussion as it is passed between the European Parliament and European Council in the months to come, as part of the process of it becoming EU law. This certainly was the case before the 2025 and 2030 targets were agreed in April 2019. However, there appears to be more and more political momentum from the environmental lobby and from politicians of a progressive nature, recognizing that previously imposed targets have not gone far enough and that there needs to be a far more aggressive target in place if the automotive industry is going to meet the 'Fit for 55' targets.

"100% reduction from 2021 to 2035 level is definitely a stringent proposal, this is by far the highest level of stringency as compared to any other key markets with a steeper year-on-year CO2 reduction being expected over a period of five years from 2030 to 2035 on new passenger car sales. To meet 2030 standards of 55% CO2 reduction to 2021 level, we may require 55% battery electric vehicle in the overall fleet which equates to an overall battery demand of468 GWh by 2030.However, for 2035 we will indeed require significant investment into battery electric vehicles and state wide charging infrastructure."