Up and down with the USA: The oil market’s cycle of surplus endures for a while longer

The oil market remains in a years-long cycle of surplus. An oil cycle is an enduring period of supply surplus or tightness that is reflected in price movements. Cycles can be identified when annual average oil prices generally move in one direction (either up or down) for several years. Cycle start and end points are only evident with the passage of time.

There is no uniform definition of an oil cycle, and the true cycle length is often in the eye of the beholder. From 1999-2012, oil prices were on a clear upward path. A bull cycle was fuelled by consistently strong oil demand growth from the developing world (particularly China) and a conspicuously weak pace of non-OPEC supply growth. But since 2013, oil prices have exhibited a distinct break from that trend.

The stunning rise of US oil production growth has been the most important catalyst in this newest cycle of surplus. As in previous eras, large new sources of oil supply tend to exert years-long downward pressure on prices. In the 1980s and 1990s, big discoveries in the North Sea, Alaska, and Mexico kept prices under pressure. Today, it is US tight oil, a huge new resource base unlocked by innovations in drilling technology.

How much longer will the current surplus cycle last? Our latest base-case outlook projects it to continue for at least another two years, with Brent oil prices languishing in the $50s in 2020-21. Interestingly, this surplus occurs even as US oil production growth is expected to slow during this period. We project global inventories to build over the next two years, as oil demand grows at only a modest pace and as new engines of non-OPEC supply growth emerge. Of course, surprises could lead to a deviation from our base-case oil market outlook.

Strong oil demand growth was a key support for the oil price recovery after the crash of 2015-16. From 2015-18, global oil (total liquids) demand growth grew at the exceptionally rapid pace of 1.7 million barrels per day (MMb/d) on average. This pace is notably stronger than the previous four years (2011-14), when growth averaged 1.2 MMb/d. But this year, demand has fallen well short of expectations. We currently anticipate demand will only increase by about 900,000 b/d, the weakest performance since the Great Recession of 2008-09. This mainly reflects slower growth in the global economy and a drop-off in trade activity. Key measures for global economic activity have deteriorated: world trade volumes and the global manufacturing purchasing managers' index (PMI) have turned negative in recent months—a rare occurrence.

Our current base case projects global economic growth in 2020 at 2.5% (near the level of this year), with a rise to 2.7% in 2021. Oil demand growth is expected to remain in a lower gear during this time, averaging 1.2 MMb/d, reflecting a downshifting of economic growth.

Supply remains plentiful, even as US tight oil growth slows

Non-OPEC oil supply growth remains strong, despite a long list of developments that have reduced supply or restrained supply growth, including US sanctions on Venezuela and Iran and production curtailments in Canada. Non-OPEC supply growth has soared in 2019 and will exceed world oil demand growth, as it did in 2014 and 2018.

US supply growth, fueled by ample financing from Wall Street, had been the main driver of higher non-OPEC output. But this has changed. Investors became disenchanted with US exploration and production companies (and with oil as an investment generally), especially as the energy sector has dramatically underperformed the broader stock market since 2015. Capital markets are no longer willing to finance the US upstream industry's excess spending, which was a cumulative $245 billion above cashflow from 2010-18 (see Figure 1). 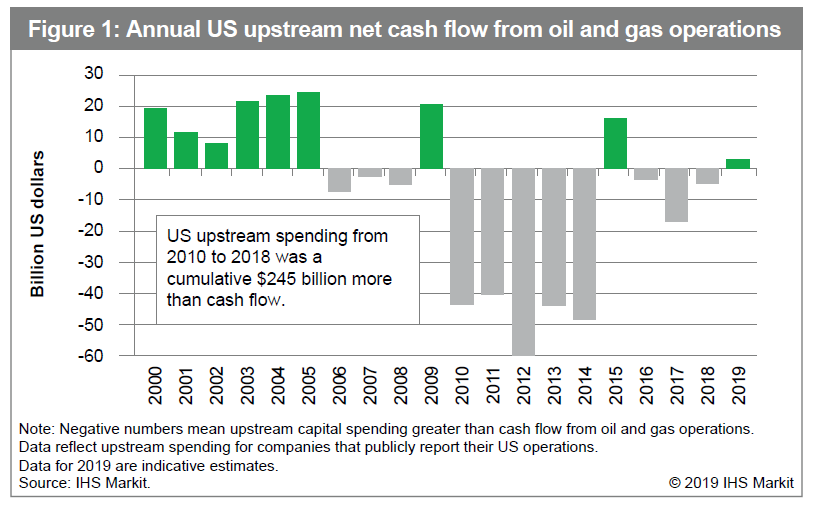 As a result, we expect US crude oil production growth to be weaker in 2020 than in 2019. We may see no growth or even declines on an annual average basis in 2021 and 2022, as the industry is forced to restrain spending, live within cash flow, and contend with stagnating oil prices. This does not mean the US production growth has come to an end forever—the resource base is still very large— only that growth is on "pause."

Although the United States is slowing down, production growth will pick up in 2020-21 in other places. Norway, Brazil, Canada, and Guyana (a newcomer to the world's club of oil producers) are expected to be key sources of oil production growth. Production in these countries is generally coming from long-lead upstream projects that were sanctioned several years ago. They will stream regardless of oil prices, since the capital has already been committed.

Vienna Alliance: How many more years of production restraint?

OPEC's strategy in this cycle of surplus will continue to be defensive. In January 2017, the "Vienna Alliance" emerged. The alliance includes OPEC and non-OPEC countries, headlined by Russia, that have agreed to cooperate on production restraint in order to prevent oil prices from falling even further. The alliance output cuts initiated in 2017 were conceived as a temporary arrangement; however, they have now been extended into their fourth consecutive year as rising non-OPEC supply crowds out OPEC's ability to grow.

The oil market has remained relatively calm despite rising geopolitical tensions in the Mideast Gulf between Iran, Saudi Arabia and the United States. The September 14, 2019 missile and drone attack on Saudi oil facilities resulted in the single largest overnight supply outage in history, and yet oil prices spiked for only a day. Similarly, the surprising decision by US President Donald Trump to assassinate Iran's top military leader Major General Qasem Suleimani on January 3, 2020, potentially triggered a renewed cycle of escalation between the US and Iran, but it was met with only brief upward price momentum. In the context of the ongoing cycle of surplus, the mere threat of supply disruptions is not sufficient to sustain bullish momentum.

America is defining the outlook for oil

The Middle East still matters a great deal, but the United States is the most prominent variable impacting global oil supply and demand. The astonishing rise in US production is slowing, to be sure, and may even decline for a time. But the United States is sending other shock waves through the global economic and financial system that are not about to end, regardless of whether President Trump is reelected next year. The remaking of the post-World War II world order began before Trump and it will continue beyond his presidency. US economic and foreign policies will shape the contours of the world oil market.

The titanic struggle for supremacy between the United States and China is one example of this. Greater antagonism between the two powers—particularly in the form of the ongoing trade war—has clearly hurt the world economy.

On the supply side, the US is deciding unilaterally—via the blunt tool of sanctions—what other major oil producers such as Iran and Venezuela can produce and export. President Trump has also influenced the oil price and production policies of OPEC's leader, Saudi Arabia, and its close Gulf allies, all of whom depend on US protection.

Increasing the voltage standards for #PV systems has been a critical driver of reducing the levelized cost of energ… https://t.co/KYwzR2sfEv

The Renewable Fuel Standard program for #biofuels has reached a crossroads, where proponents of #lowcarbon fuels ar… https://t.co/uHTFgSt6m7