At the IHS Markit "Energy Outlook Seminar: Exploring Transition" event, held in Jakarta on 12th September 2019, Mr Jaffee Suardin, Deputy of Planning, SKK MIGAS, presented on the long-term strategy for the future of upstream oil and gas in Indonesia. The strategy was based around four pillars:

For this article, we have focussed on the second pillar and will be discussing the potential to transform resources into production including understanding the key basins to focus on and the companies and issues involved.

There is a lot of potential to transform resources to production in Indonesia. Over 10.5 billion BOE of recoverable oil and gas resource have been discovered in Indonesia from 2000 to 2015. Of this, only slightly more than 25% is currently in production with a further 10% under development, leaving nearly 65% undeveloped. Figure 1, below, shows this data on a basin level.

Figure 1: Only 25% of resources discovered in Indonesia from 2000 to 2015 have been brought onstream.

The Bonaparte Basin consists of a single gas field, Abadi, located in the Masela PSC. The field was discovered in December 2000 and the challenges to FID have been well documented. Significant progress has been made in the last year and, if all goes to plan, then the field will come onstream in 2027, some 27 years after discovery.

The story of the Kutei basin discoveries is very different, with the basin being mature in terms of gas infrastructure. The Bontang LNG plant came onstream in 1977, with the capacity expanded on a number of occasions. However, as can be seen in Figure 2, below, the current challenge for the Bontang LNG plant is that it is now under-utilised with 2019 seeing utilisation of less than 50%.

Figure 2: The majority of production in the Kutei basin is used as feedstock for the Bontang LNG plant…..there is ample, and growing, spare capacity.

The feedstock to the plant has historically been underpinned by production from the Mahakam Offshore PSC, which allows us to (briefly) divert to the ongoing challenges and uncertainty created by the handling of expiring PSC's in Indonesia. These have been well documented and the Kutei basin has had more than its fair share exposure to this. In fact, it originated here with the transition of the Offshore Mahakam PSC from Total and Inpex to Pertamina in 2018, with the Sanga Sanga PSC and East Kalimantan & Attaka PSC also transitioning to Pertamina in 2018 whilst switching to gross split terms. There are also some key PSC's whose futures need to be resolved, but more on that later.

The commercial tale of the discoveries since 2000 in the basin can really be split into two groups. The first group consists of a number of large gas discoveries made by Chevron in the early 2000's and have been planned for development under the Indonesia Deepwater Development (IDD) project. There have been several false starts, but we are currently no closer to development than we were ten years ago. The second group are the fields discovered by Eni, which started with the Jangkrik discovery in 2009 and has continued with the Merakes and Merakes East discoveries. See figure 3, below.

Eni successfully brought Jangkrik onstream in 2017, eight years after discovery, and a similar cycle time is expected for Merakes. This shows that success is possible and has put Eni and its partners into a very strong position in the basin to take advantage of further opportunities as they appear, and they are already doing so.

What next for Eni?

Success within a basin will tend to drive re-investment, provided the opportunities are there. For Eni, this has taken the form of them taking further acreage, with a view to growing their reserves and production within the basin.

In August 2019, Eni was awarded the West Ganal PSC which was offered as a part of the Conventional Oil and Gas Bidding Second Round 2019. The PSC contains the Maha gas field that is an excellent fit with the Jangkrik development, sitting closer than Merakes to the Jangrik FPU and providing potential backfill which could be brought onstream quickly.

As well as picking up acreage containing discovered resources, Eni is also planning further exploration with the drilling of the Geng North well in the North Ganal PSC, currently planned for H2 2020. 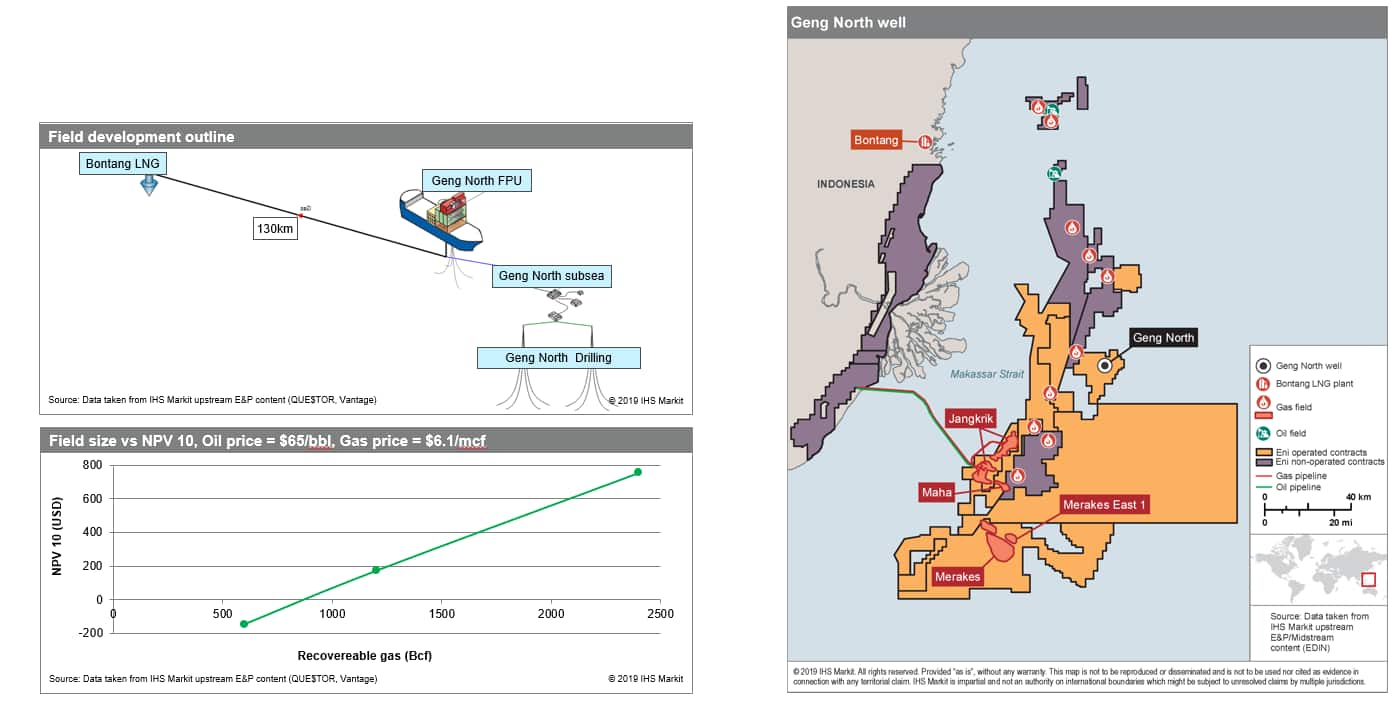 The prospect is well located for a potential tie-back to Jangkrik, or directly to the Bontang LNG plant. If we assume an FPSO-based development tied-back to the Bontang LNG plant, then we have estimated that the recoverable volumes required to breakeven are about 900Bcf. One way of improving the economics, would be to look at a potential tie-back development to, or integration into, the IDD project. Which allows us to segue nicely to this.

The elephant in the room, and the cause of much uncertainty in the Kutei basin, is the future of the Rapak and Ganal PSC's. They are operated by Chevron, with Eni and Sinopec having smaller stakes. The contracts contain the major discoveries for the proposed IDD development: Gehem and Gendalo that were discovered in the early 2000's and have gone through several iterations of development planning but have yet to reach FID.

More recently, the handling of the expiring PSC's has created a new level of complexity, as the PSC's are due to expire in 2027 and 2028. Adding to this is the fact that Chevron's base producing asset in Indonesia, the Rokan PSC, will be transitioning to Pertamina in 2021. This will not have had a favourable impact on the ranking of the IDD project within Chevron's global seriatim of potential investments.

There are a multitude of futures for the Rapak and Ganal PSC's, with all options potentially being on the table. At one extreme would be an extension of the contract to the current rightsholders under the current PSC terms, as we have seen with the Masela PSC (Abadi field). At the other extreme would be a full transition to Pertamina under gross split terms, with the responsibilities and capital requirements this entails.

Eni will be an interested participant in this process, given that they currently have a 20% stake in the project. They will also be looking at the potential to take a larger role, including operatorship, if the contracts do not get extended. Their success and investment within the basin will allow them a good seat at the negotiating table.

Other challenges in the Kutei basin

In addition to the above, there are a number of other challenges that will need to be resolved in the coming years.

Indonesia can achieve its strategy, but more success stories are needed

Successful exploration, particularly in this era of short-cycle barrels, must be about more than purely finding oil and gas. It requires the turning of these discoveries into cash-flow and profits. And doing so in a timely manner. Seeing peers have this kind of success will always increase the attractiveness of a given country or basin.

Indonesia still has great below-ground potential, both in terms of discovered resource opportunities and exploration in both mature and frontier basins. However, above-ground factors have continued to create issues with the industry heavily politicised and recent challenges, the handling of the expiring PSC's and the drastic change in fiscal terms to the Gross Split model, creating investor uncertainty.

If the Indonesian government can consistently provide the correct signals to international companies, including showing that discovered resources can be brought into production in a timely and profitable manner, then Indonesia can become a focus for development and exploration investment again and achieve the long-term strategy set out.