China's three national oil companies, or the NOCs, traditionally dominated the country's natural gas importing business. But recently, many non-NOCs, such as citygas utilities and power generation companies, have emerged as new independent importers. Together, these companies have proposed over 140 MMtpa of LNG receiving capacity, and a handful of them have already begun importing LNG. The question now is "What level of success will they achieve?"

By the end of 2018, four non-NOCs operated five LNG receiving terminals; others have imported LNG via third-party access to others' LNG terminals. Non-NOCs now account for about 6% of China's LNG imports. 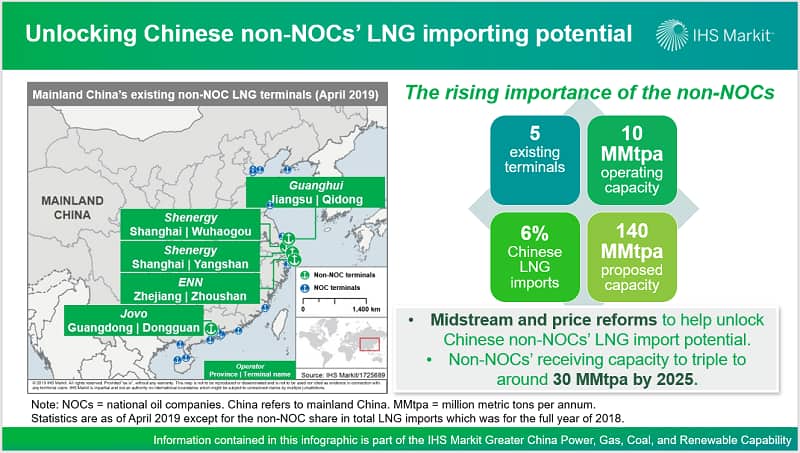 Given the 10 MMtpa of capacity already under construction and many proposed projects by non-NOCs, we expect their total LNG receiving capacity to reach around 30 MMtpa—a quarter of China's total receiving capacity in 2025. This means a significant LNG purchasing capability coming from relatively new players.

Nonetheless, this outlook is only a fraction of the proposed capacity, reflecting the challenges still facing the non-NOCs. First, the lack of pipeline access is a major issue. This limits the outputs for non-NOCs' LNG imports. Most of them have to truck out their LNG imports and sell it in liquid form. Second, the current pricing regulations intentionally set domestic gas prices in the pipeline system at a low level to encourage demand growth. This means that LNG imports sold in gaseous form may lose money.

Natural gas market reforms are ongoing to address these issues. The government is looking to unbundle the pipeline assets from the NOCs to facilitate third-party access. Gas price deregulation could also help with the financial challenge. However, it will take time for these reform efforts to be implemented in order to fully unlock the LNG potential for China's non-NOCs.

Learn more about our coverage of the Greater China energy market through our Greater China power, gas, coal, and renewables service.

As the world shifts to lower-carbon #fuels, refining companies are changing the ways they come to market, maximize… https://t.co/RrJNVLRWcn

The PV inverter market achieved record shipments growing by 19% to 126 GW in 2019. As the industry continues to enj… https://t.co/vAdKUF84QN