Unleashing the beast? Key issues for the US upstream in 2017

This is a collaborative article from IHS Markit upstream experts.

As 2017 takes off and budgets are announced, one thing has become clear; the US is poised for production growth, and everyone wants it at a reasonable cost. Capital spending announcements in 2017 for the US onshore have already negatively surprised investors in a number of instances, but the largest E&Ps seem relatively unscathed thus far. Operators are anxious to capitalize on their learning and the efficiency gains of the past two years while service companies are waiting with baited breath for an uptick in activity (and in turn, their prices). Investors are happy to know operators deliver returns in basins other than the Permian as oil settles into the mid $50/bbl range, a difficult feat just two years ago. Recently, IHS Markit presented a webinar where we considered the expectation for the L48 onshore industry in 2017. And 2017 is certainly the year to unleash the beast and get the growth engine restarted.

The US M&A market in 2017 will again be dominated by the Permian Basin, where the unquestionable majority of deal money (44% of total $ and 30% of total deals) have occurred since 2015, but there are signs of life in the Eagle Ford and Bakken, where consolidation has been handsomely rewarded in the stock market for the few brave enough to drill in the canyons of Wall Street for assets. However, as operators continue to delineate benches and acreage in the Permian, the high-watermark for valuations may have already been set. Though Permian stocks have dropped a median of 6% to date, after rising 58% in the first nine months of 2016 and a flat fourth quarter 2016, the equity markets seem to be valuing companies primarily based on single zone, "Monster" well economics assuming 660' inter lateral spacing and 1.5 mile laterals.

Equity markets have rewarded those E&P management teams that have capitalized upon premium-priced equity financing of transactions that would have immediately diluted shareholder value had they been debt-financed. Unfortunately for operators not already in the Permian, and who do not enjoy the same equity market premium as their Permian peers, moving into the basin or expanding positions that lacked "critical mass" becomes challenging to full-cycle economics. Additionally, much of the private equity backed companies have "cashed-out" of their positions in the basin, leaving a notable hole in the acquisition markets, and making us question where private equity will move to next, having handsomely exited their Permian investments. In 2017, we will see operators consolidating larger positions, and/or aggregating contiguous acreage from smaller companies to make a meaningful position. 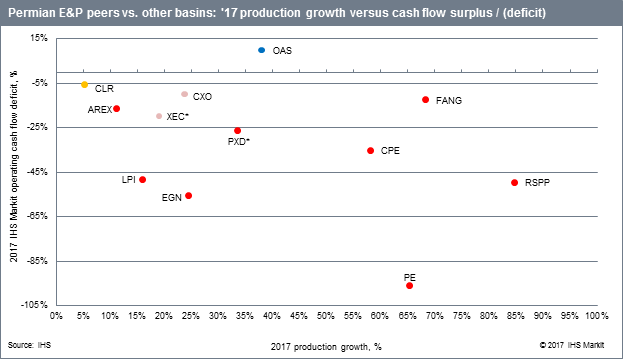 For the service sector, after two years of steep declines, IHS Markit anticipates onshore costs to show increases. Obviously, the sector's pricing power will not be equal across all plays and basins, as service sector prices are expected to show the greatest rise in the Permian Basin, while Bakken costs will see only small changes. Weighing heavily on Permian service providers will be increased labor rates, as employment is up 22% since Q4 2016, and higher wages will be required to entice labor back into oilfield services. Average service sector costs will increase 22% through 2017, with plays showing more activity and tighter service markets having increases closer to 35%. Additionally, per well costs will continue to increase due to operator preference for longer laterals and increased proppant, further increasing total revenues to providers.

The impact of these service sector price increases will certainly play with well economics, tightening up competition between basins and plays. At present, the Permian Basin has some of the most compelling economics, but with strong price increases, the marginal barrel will shift to lower productivity plays like the Bakken or Niobrara. In general, a 25% increase in capex costs has a corresponding impact of raising current break-even prices ~22%. Thus, when Permian plays are subject to high cost increases while the Bakken sees a more muted change, the competitive nature of the L48 system will become much more dynamic. 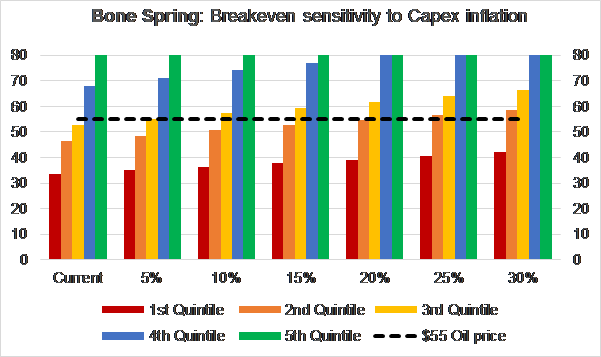 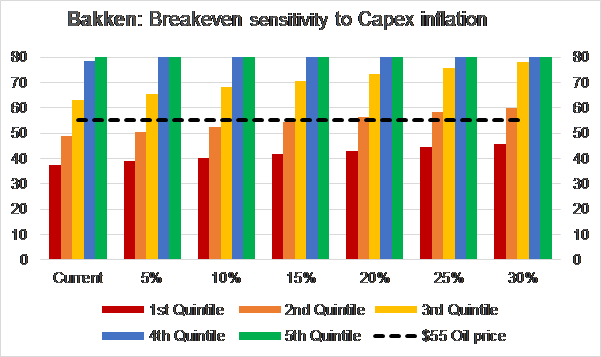 (Note: Quintiles are determined by categorizing wells into 20% slices based on productivity. Quintile 1 wells are the best producers in a play.)

However, maintaining the continued attractiveness of the Permian Basin is the continually improving well results that will temper service cost increases. Bakken operators, in general, have been unable to effect a marked increase in per well productivity, while Eagle Ford operators have raised productivity ~15% since the price collapse, largely due to proppant loading and high-grading. The Permian Basin, though, continues to show improvements as operators work to delineate both acreage, benches and well configurations for the best productivity. This trial and error approach has yielded large productivity improvements, particularly in the Midland sub-basin. At present, the trend of extending laterals and increasing proppant intensities has not shown indications of having diminishing impacts, indicating operators have the opportunity to continue improving productivity through the fastest growing basin the L48.

Finally, the consequences of these factors combine to significantly alter the trajectory of US production. Reaching a trough of ~8.7mmbbl/d in November, 2016, US output will rise to 9.3mmbbl/d at year-end 2017. Permian Basin growth of ~700,000 bbl/d will offset declines in other plays, despite increasing service sector costs, though the growth will level off slightly in 2018, concurrent with oil price and activity. Drilled Uncompleted (DUC) draw-downs will continue through 2017, as operators become confident the worst is over and select their most economic wells to finish completing and initiate growth. Longer term, the US reaches 9.7mmbbl/d by the end of 2019, with moderate growth thereafter.

For more detailed analysis, watch our webcast on these topics.

This is a joint article authored by: