The global petrochemical industry has always been cyclical. After experiencing an extended upcycle from 2015-2018, the industry was affected by lower economic growth in countries such as China, decreasing demand for many petrochemicals and beginning a reduction in margins in 2019. While demand was declining, significant additional production capacitywas expected to enter the market in the 2019-2022 time frame. The combined effect of lower demand and higher supply was expected to reduce margins in from 2019 to 2021 - and that was before the impacts of COVID-19 and lower crude oil prices were realized.

To understand recent market developments and the impact in Latin America, let's consider ethylene, the building block of the petrochemical industry. Latin America has an installed capacity to produce approximately 7.5 million metric tons of ethylene per year at facilities throughout the region (see Figure 1). 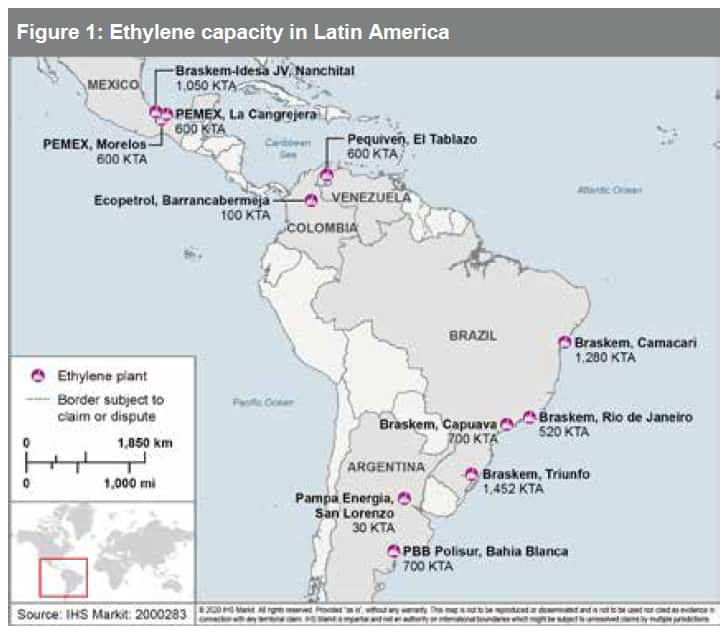 Of the feedstock slate at crackers in the region, naphtha is the preferred feed with 46% of the total (see Figure 2).

In recent years, however, ethylene production in the region has been limited by feedstock availability. Hence, imports of ethylene derivatives and in some cases, ethane and propane shipments have increased significantly as well. Today, almost 12% of the ethane consumed at the Braskem/Idesa cracker in Mexico is imported from the US Gulf Coast.

We believe the impact of lower crude oil prices will affect production cost and competitiveness of the petrochemical industry in Latin America. On the demand side of the equation, the negative impact of COVID-19, primarily on durable goods, will be unprecedented. As a result, production of many end-use products derived from petrochemicals will be dramatically lower, affecting operating rates at the crackers.

Lower crude oil prices will result in lower naphtha prices, which will then translate into increased cost-competitiveness for naphtha crackers. This trend primarily affects crackers in Brazil, where naphtha accounts for 73% of total feed. While ethane crackers in the Americas (including the USA, Mexico, and Argentina) are expected to lose some of their cost advantage in the 2020-2021 period, we anticipate this change in production cost among crackers in the region will be short-lived - ended by a return to higher crude oil prices and a higher naphtha price by end of 2021. 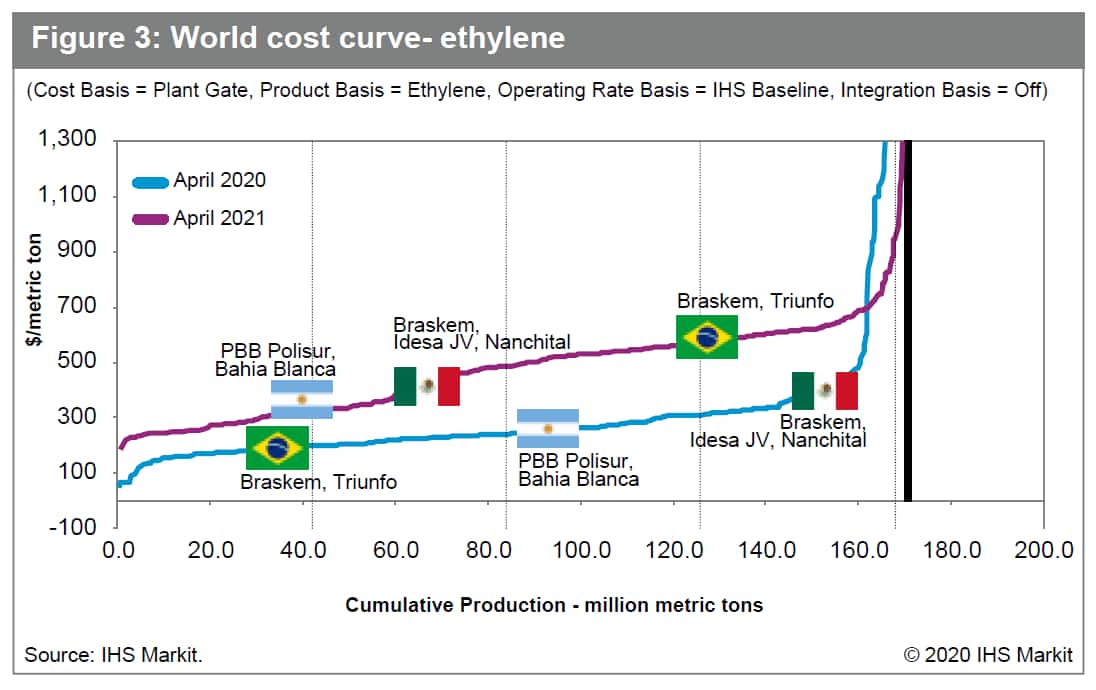 We believe producers in Brazil that crack naphtha will be the lowest-cost producers in the region for a short period. Ethane crackers in Argentina and Mexico will move higher along the cost curve to reach less-competitive cost positions. This situation is expected to change in 2021 as naphtha prices increase upon the return of higher crude oil prices.

These changes in production costs have a significant impact on local markets, trade opportunities, and production rates. For a producer with a flexible feed position, having access to this information is very useful to develop strategies and help mitigate the downturn. Producers can even increase production to make better-than-expected margins and earnings during these unexpected and short-lived windows of opportunity.

Despite a competitive position for Brazilian naphtha crackers in early 2020, the COVID-19 lockdown created a significant downturn in domestic demand - virtually eliminating the possibility of Brazilian crackers running at high rates during this temporary competitive position. However, the rapid recovery and increase in domestic demand in China opened the door for exports, as production costs at Brazilian crackers were competitive with other producers around the globe. Looking ahead, as delivered cost to other regional markets becomes too high for ethane cracker producers, there may be opportunity to expand sales to regions not previously considered. In this way, we could see Brazilian product entering markets in Europe and Asia.

Of course, very little ethylene is sold as monomer. More often it is sold as a derivative such as polyethylene, ethylene glycol, or polystyrene, typically in domestic markets that yield a better netback. For example, for polyethylene plants consuming ethylene from naphtha feedstock steam crackers, a much more favorable competitive position will develop under the current crude oil price scenario. However, demand for these derivatives must exist in order to run units at relatively healthy rates.

Prior to COVID-19 and current lower crude oil prices, we anticipated a downturn in margins for most chemical chains, which should have extended for some years to come. However, unexpected change in global demand for most products has reshaped the immediate future. In dynamic markets, access to information pertaining to changing production costs and margins is essential to creating insight into a product chain and developing strategies for the coming years.

Fundamental changes in production costs, feedstock availability, and global trade will challenge "business as usual" in Latin America. Hence, a clear understanding of how crude oil prices affect the selection of a competitive feedstock slate for producers in the region can prove valuable in these uncertain times.

The large-scale #greenhydrogen project H2 Magallanes Project will consist of up to 10 gigawatts (GW) of wind instal… https://t.co/POxlY6SEgT

We're proud to announce some of the industry leaders that will be convening at #IHSMarkitWPC 2022 on 22-25 March in… https://t.co/cMxQhOgDRt