In gas wells, liquid loading takes place when the gas rate is not high enough to lift liquids (e.g. water and/or condensate) to the surface. Engineers are often tasked to identify and correct this type of production problem through operational changes (e.g. reducing wellhead pressure). Similarly, based on field experience, engineers can plan in advance the well completion and/or select tubing size to address expected liquid loading issues.

During vertical upward flow, due to buoyancy effects (density difference), it is expected that the gas will flow faster than the liquid. Similarly, depending on each of their velocities, the gas and liquid will present different topological distributions inside the pipe known as flow patterns.

At high gas velocities, gas tends to move to the center of the pipe forming a vortex commonly known as gas core. Liquid is then pushed out of the gas core and onto the pipe wall forming a film. Also, due to the high shear at the gas-liquid film interface, the liquid film is constantly atomized as droplets that are transported in the gas core while some are deposited back into the film. This flow pattern is known as annular-mist flow and it is the one preferred in gas wells that produce liquids.

As gas velocity decreases, the liquid film starts to bridge the gas core and the liquid close to the pipe wall starts to fall back. This progressively leads to new flow patterns such as churn, slug and eventually bubble flow (lowest gas velocity). The amount of liquid per pipe section along the well is known as liquid holdup and varies depending on the flow pattern at hand. This also has an impact on pressure losses which have to be properly estimated along the well.

Over time, an increasing presence of liquid in the well can create a recirculation zone that generates an excess pressure at the sandface that can hinder or, if high enough, stop gas production altogether. This is commonly known as liquid loading. 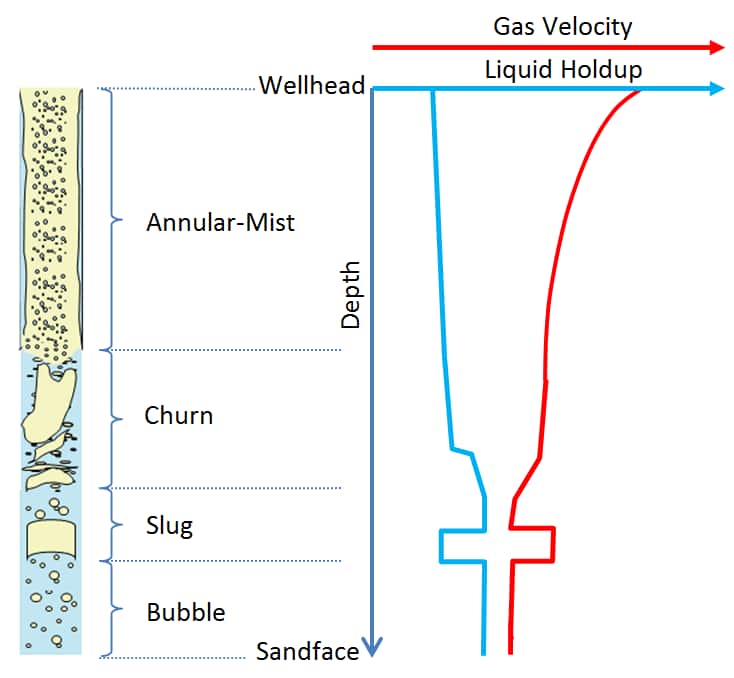 For this reason, when evaluating these types of wells, it is important to understand:

One way to evaluate the capacity of gas wells to lift liquids (even before the problem begins) is with the use of the Turner, Coleman and similar equations. These expressions estimate the gas velocity required to stop a drop of liquid (water or condensate) from falling. For this reason, these equations are used to determine the minimum gas velocity required to avoid or correct liquid loading. This minimum velocity and its corresponding rate are also known as terminal, critical or unloading velocity/rate. 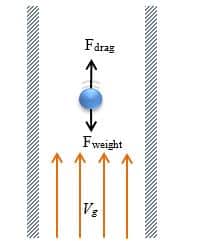 The following equations describe the critical rate and minimum unloading velocity according to both authors. 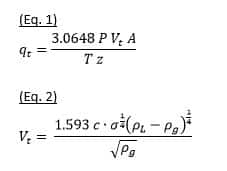 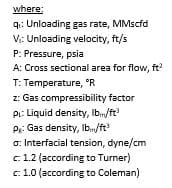 Turner's critical rate is always 20 percent higher than Coleman's due to the adjustment done on the "C" value to fit Turner's observed data set. It is also worth mentioning that a rule of thumb is that the Coleman rate is recommended for wells with wellhead pressures lower than 500 psi.

Figures 3 and 4 below are examples of typical liquid loading warning signs in gas wells. This particular well had a stable production decline, except for the last months (April to August 2016) in which the gas rate goes out of trend, as there is an increment of pressure difference between tubing and casing indicating liquid accumulation in the annulus and the bottom of the well where low velocity flow patterns (e.g. churn, slug and/or bubble flow) can be found. However, if there is a tubing in the well and it is landed close enough to the perforated interval (about 30 ft or less) the well can still produce as long as the velocity at the end of the tubing is high enough to lift liquids (annular-mist flow can be sustained). 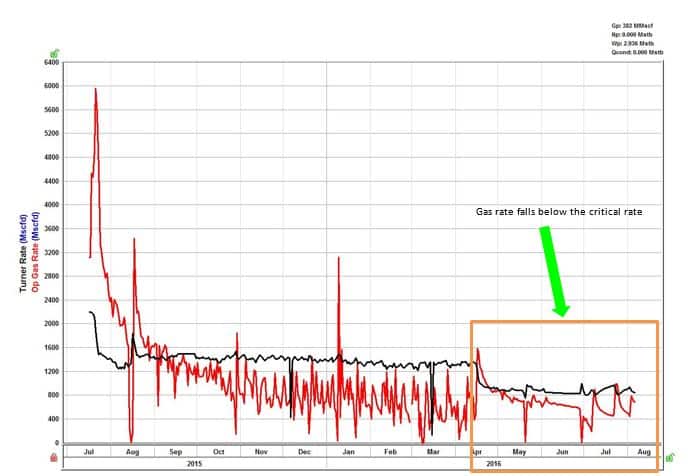 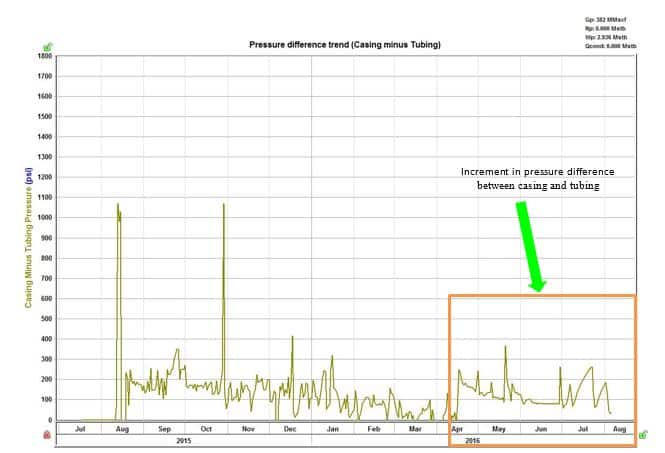 Another method to evaluate wells is through nodal analysis. The reservoir behavior and pressure losses in the well are represented by two curves: AOF (Absolute Open Flow) and TPC (Tubing Performance Curve) or VLP (Vertical Lift Performance). By using the current flowing conditions, if the expected operating point (intersection between AOF and TPC curves) is different from the actual conditions it could be due to liquid loading issues. This can be further confirmed if the operating rate is lower than the unloading rate. Figure 5 represents these concepts. 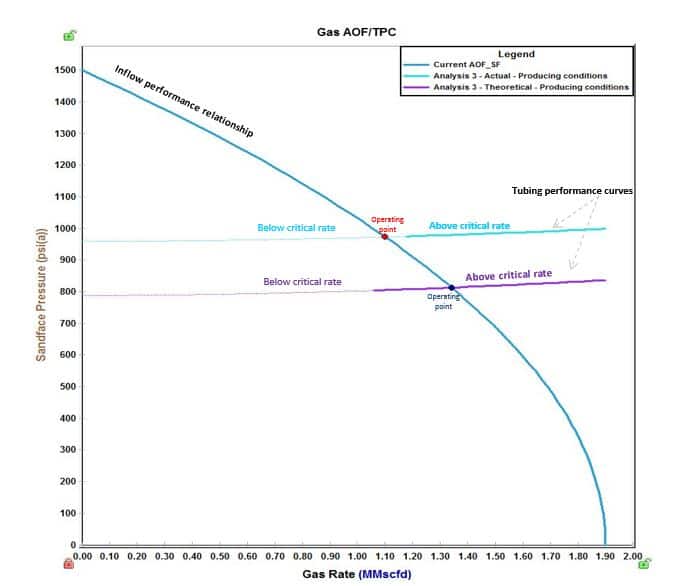 Likewise, a velocity profile analysis can also be carried out in order to confirm an unexpected lower gas velocity inside the wellbore. 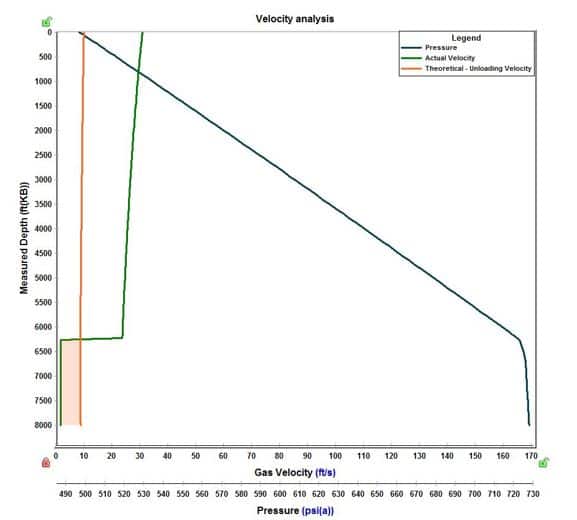 Lastly, wells suffering from this problem typically still have potential. In such cases, the gas velocity needs to be increased at or above the required unloading velocity, or, a form of artificial lift can be installed to reduce the backpressure in front of the reservoir.

In summary, some options to correct liquid loading are:

Adriana Hernandez is a Technical Advisor in Engineering at IHS Markit.
Posted 8 May 2017