Understanding … headline PMI vs. subindices: how signals can be lost by focusing exclusively on the headline PMI

The headline PMI was designed as an overall barometer of manufacturing business conditions in the 1980s, bringing together the results of five questions from the NAPM (now ISM) survey of purchasing managers into one single-figure diffusion index.

The components with their respective weights are shown below: 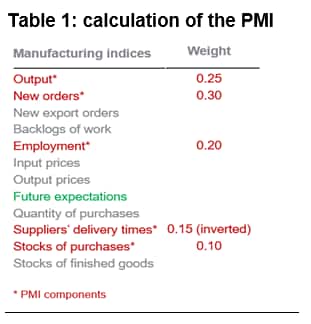 Note that not all PMI survey indices are used in the calculation of the PMI (the price indices in particular are excluded). Also note that the suppliers' delivery times index is inverted such that longer delivery times (sub-50 readings) are associated with busier periods of economic activity and vice versa.

The rationale behind the methodology was that those components which tend to lead the business cycle are accorded the highest weight and those which tend to lag are given the lowest weight. Hence the new orders index, which tends to move in advance of other indicators, gets the highest weight. Production is usually quickly altered in response to any significant order book change, and therefore receives the second-highest weight, and eventually employment levels are also altered. At such times of production capacity growth (or contraction), suppliers also get busier (or less busy), meaning delivery times can lengthen (or shorten), and eventually the altered buying process feeds through to changes in inventories.

The theory does indeed generally work in practice, as chart 1 shows, albeit with some notable exceptions which we will discuss later. In this instance we illustrate the PMI and its five components using the eurozone PMI from IHS Markit. 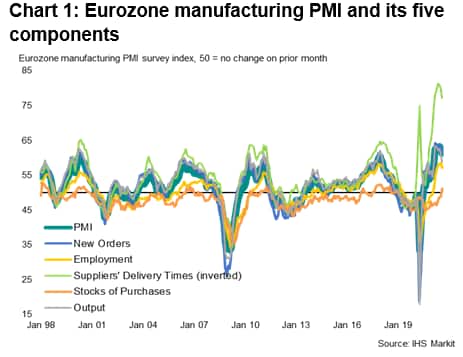 The lagging nature of employment and inventories (stocks of purchases) are clearly demonstrated in chart 1. To help further assess the leads and lags of the PMI's components, the correlations of the five components with the headline PMI are shown in table 2 (again using the eurozone PMI), while table 3 highlights the leads and lags against official manufacturing production growth (as measured by the three-month-on-three-month change). Note that the leads and lags shown in table 3 do not take into account the earlier publication of the PMI data ahead of the official data, which represents approximately one additional month of lead for the PMI.

The correlations and leads and lags (highlighted in yellow) in table 2 further add to the suggestion that the theory behind the PMI weighting system derived in the 1980s still largely holds for the eurozone PMI. This is further supported by table 3. For example, the highest correlation (highlighted in yellow) for the new orders index is observed when this index leads official manufacturing production growth by one month, while the output index exhibits its highest correlation with no lead or lag. Suppliers' delivery times, employment and stocks of purchases, in contrast, all lag changes in production.

As expected, the new orders and output indices exhibit a higher correlation with official manufacturing production than the headline PMI as these sub-indices are tracking demand and factory production. Interestingly, however, with the new orders index also acting with a lead over the headline PMI and other indices, it is arguably the most useful and reliable single advance indicator of official manufacturing production. 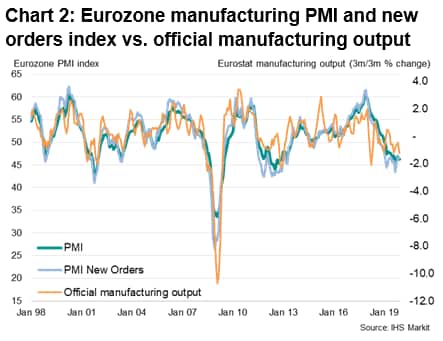 The tables also show correlations of the other survey sub-indices which are not included as components in the calculation of the PMI, some of which provide interesting food for thought. For example, since the PMI methodology was devised in the 1980s, manufacturing has seen a shift to the use of just-in-time production, which likely explains why the quantity of purchases index (which tracked inputs bought by factories) now performs extremely well as an indicator of production.

Similarly, the backlogs of work index displays high correlations with both the headline PMI and the official manufacturing production data, though it should be noted was only included as a PMI question in 2002 meaning comparisons with other indices are not strictly accurate. The high correlation nevertheless hints strongly that this index can provide a great deal of information with respect to production capacity utilisation.

The pandemic has, however, recently thrown up new issues to further highlight the value of the PMI's sub-indices over and above the headline PMI.

Most notably, the supply shock caused initially by the closure of factories in China and the subsequent curding of production capabilities (and transport capacity) around the world has meant the suppliers' delivery times has acted to distort the signal from the headline PMI. By signalling longer deliveries due to factory closures rather than strong demand for inputs, the headline PMI has at times understated the downturn or overstated growth relative to the survey's output gauge. The latest data at the time of writing, for example, show eurozone industrial output being constrained relative to order book growth to an unprecedented degree due to materials shortages.

This order book/output divergence meanwhile helps to illustrate that, while the new orders index provides a reliable advance indication of production, the most useful and reliable coincident indicator of official manufacturing output is the PMI survey' output sub-index rather than the headline indicator, a finding which is confirmed by the correlation shown in table 3. 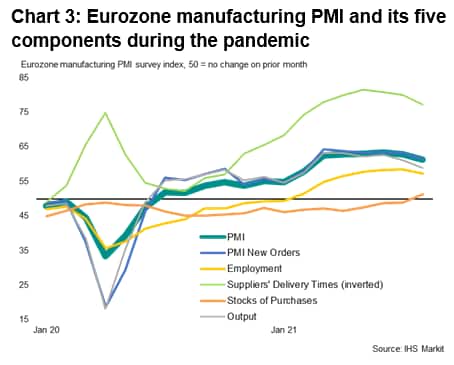 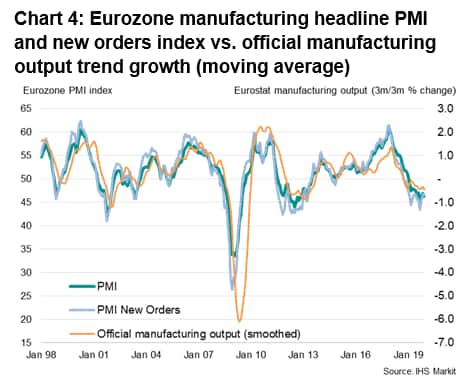 So far we have only looked at the headline PMI and its five components. However, to really understand the dynamics of the manufacturing sector at any time, users really need to look at all of the survey's subindices to understand the interplays of demand, supply and production in order to fully appreciate growth momentum. Often this is aided by looking at ratios between different survey indices.

One such ratio is shown in chart 5, which looks at the extent to which new orders inflows are diverging from the amount of inventories of finished stock held by manufacturers. The theory here is that if orders start to rise while inventories are low or falling, production will soon be raised, and vice versa. As chart 4 shows, this ratio clearly acts not only as good lead-indicator of official production data (a correlation of 0.81 with the ratio one month ahead of the official 3m/3m % change, beating all individual sub-indices), it also acts as the best leading indicator of the headline PMI[1] that we have so far found if the user is seeking an insight into the PMI trend three or more months ahead. 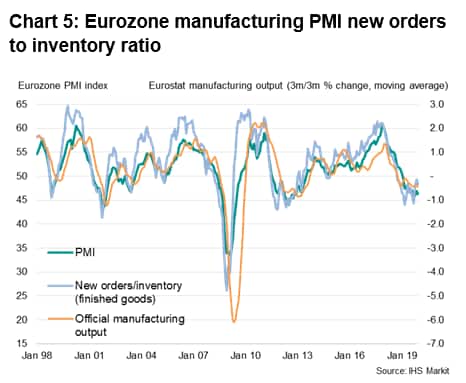 Note that in this note we are only looking at signals for production, with GDP nowcasting, price, employment, capacity and other signals investigated in a growing library of other notes which can be found here.