Under the hammer: Drivers of recent renewable tender prices in emerging markets

As renewable tenders become more widespread and operational projects reach maturity, seasoned developers are better able to price and hedge risks. As a result, the type of developers a market attracts often impacts a market's ability to reach renewable goals within the specified timeframe. IHS Markit analyzed drivers for further cost reductions and risks to both developers and host countries in the renewable auction market, as well as conducted a detailed review of recent tenders in Argentina, India, Malaysia, Mexico, and Thailand. These countries awarded a total of 50 GW of photovoltaic and onshore wind through competitive procurement schemes over the past three years.

Our research highlighted that increased participation of developers in tenders has accelerated cost reductions through diffusion of best practices and scale. However, the ensuing compression in prices raised concerns that smaller and less experienced developers underestimate development and offtake risk.

While large international companies set the price, most capacity in emerging markets was awarded to local companies either alone or in partnership with international developers. Of all the developer types, international firms with no or a few realized projects are considered the highest risk, owing to a pattern of bidding prices in line with the largest and most experienced players and below local players, despite lacking scale and local experience. 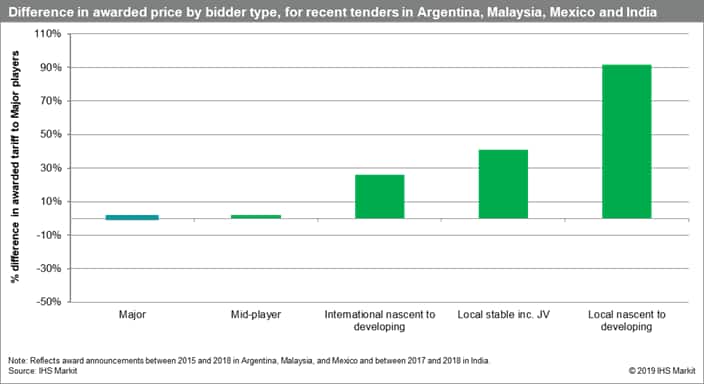 Learn more about our coverage of the renewables market.

Anna Shpitsberg is a Director for IHS Markit.

Francesco d'Avack is a Senior Research Analyst for IHS Markit.