The latest KPMG and REC survey data, compiled by IHS Markit, highlighted mixed hiring trends in November. A further drop in permanent placements contrasted with marked growth of temp billings. Recruiters indicated that the second national lockdown and ongoing uncertainty regarding the coronavirus disease 2019 (COVID-19) pandemic led clients to opt for short-term staff until the outlook brightened and businesses were operating at more normal levels.

Weaker levels of business activity were highlighted by the latest UK PMI survey releases, which also showed employment levels falling sharply. The PMI and Report on Jobs surveys both widely commented on redundancies, as many companies faced weak demand and adopted cost-cutting measures. As a result, overall vacancies fell further, with retail and hospitality the worst affected areas.

The Report on Jobs survey, which monitors over 400 recruitment consultancies across the UK, provides advance signals of labour market trends. After rising through the third quarter of 2020, permanent staff appointments across the UK fell for the second month running in November as increased COVID-19 infection rates led to a second national lockdown.

That said, the rate of decline was considerably slower than recorded at the height of the pandemic earlier in the year. Further disruptions to business operations led companies to instead opt for short-term workers, as highlighted by a further marked rise in temp billings, until market conditions begin to normalise. 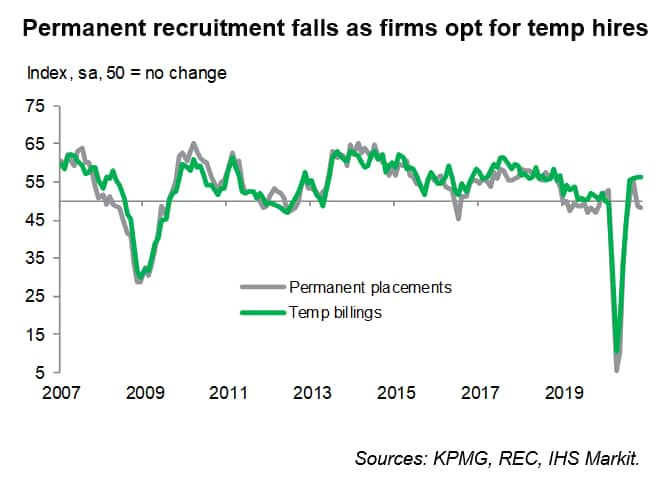 The downbeat picture has been confirmed by recent official labour market data releases. The ONS reported that employment has now fallen for six successive survey periods, with the latest official release highlighting a fall of 164,000 over the third quarter. However, it's important to note that the coronavirus job retention scheme has helped to stem overall job losses, as furloughed staff are still counted as being in employment.

Nonetheless, the impact of the pandemic and subsequent furlough scheme is laid bare when comparing the PMI employment index with official weekly hours worked data, which have both remained in negative territory since early 2020 as many companies have either shed or suspended workers and reduced capacity. 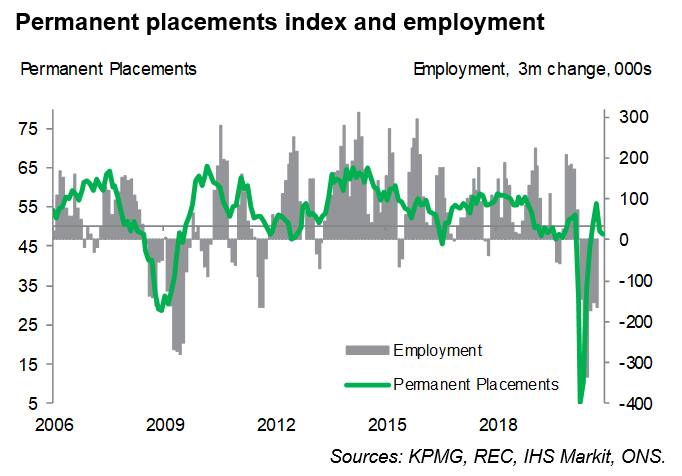 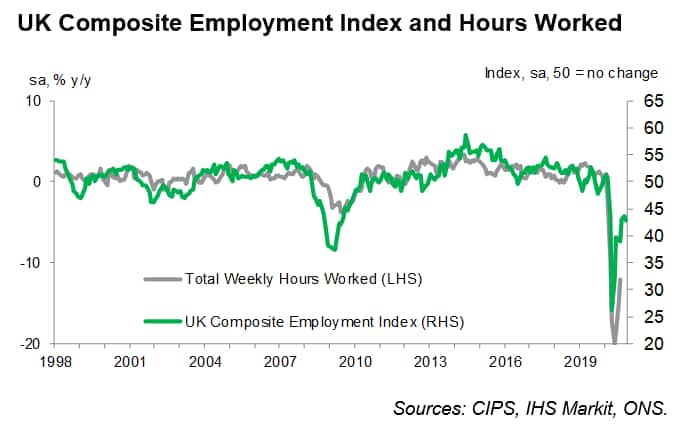 The furlough scheme has also meant that the unemployment rate has remained relatively low through the COVID-19 crisis so far. However, as more redundancies have been reported, particularly in consumer-facing sectors such as retail, unemployment has been creeping up in recent months, rising to 4.9% in the three months to September; the highest since Q4 2016. The increase in unemployment was signalled in advance by the substantial increases in staff availability recorded by the recruitment survey in each month since April, which have shown candidate numbers rising at the steepest rate since the global financial crisis. Company layoffs have been widely cited by recruiters as having boosted staff availability, but there have also been reports of people (particularly those on furlough) who are job-seeking in order to obtain more secure employment.

Although the upturn in staff availability eased in November, the recruitment survey data still suggest unemployment is likely to rise at a historically strong rate as 2020 draws to a close. 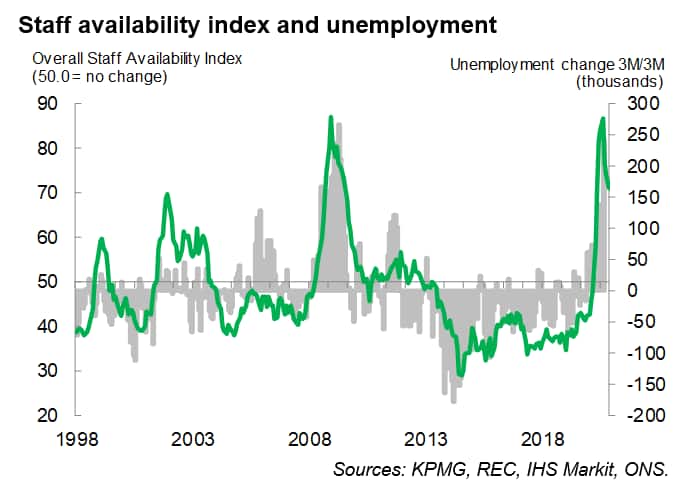 Demand for staff weakens, particularly in retail and hospitality

The survey's vacancy data recorded a back-to-back monthly decline in overall demand for staff in November, with the rate of decline quickening to a solid pace. That said, the fall in vacancies was much less severe than those seen between March and August.

Official data have likewise highlighted a marked drop in vacancies since the pandemic hit, and they remain well down on the levels seen this time last year (-34.6% on an annual basis in the three months to October 2020). Encouraging, the recruitment survey data have shown that demand conditions are near stabilising, however it's likely to still be some time before vacancy numbers fully recover. 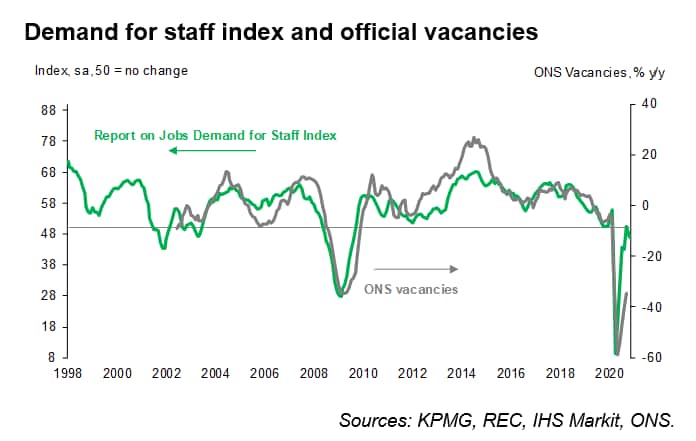 The fall in total vacancies was driven by a solid decline in permanent staff demand, according to the recruitment survey, as temporary positions rose further in November to reinforce the current preference for flexible short-term, temporary staff.

Detailed sector data reveal that consumer-facing sectors such as retail and hospitality remained the weakest performers in terms of permanent vacancies, as restrictions continued to severely limit business operations and customer numbers. In contrast, the Nursing/Medical/Care sector has seen the most resilience in 2020 to date and was the only sector that recorded growth of demand on average through the year. 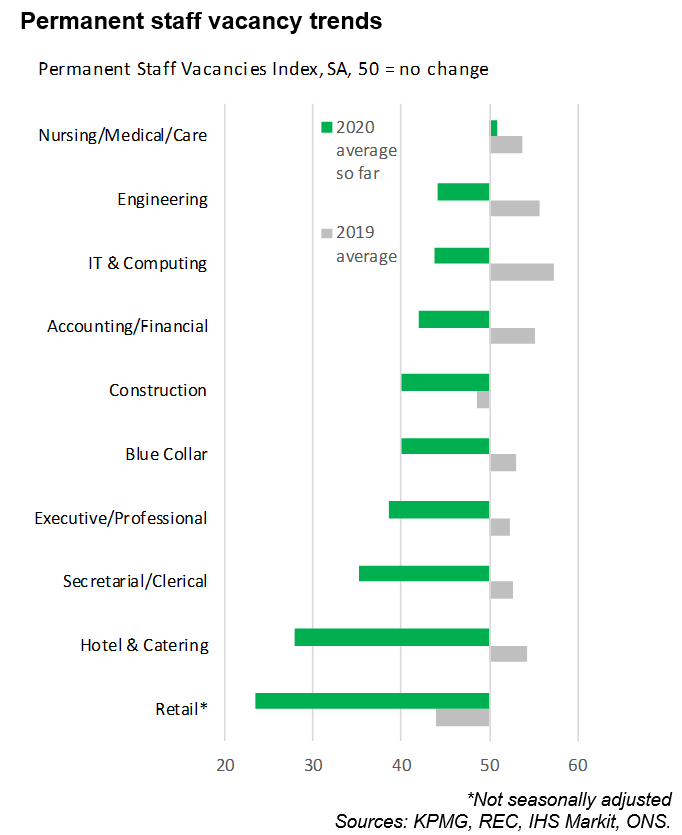 The sharp rise in candidate availability, limited demand for workers and greater pressure on budgets led to sustained falls in pay for both permanent and temporary workers in November. While the drop in permanent starting salaries softened further from May's nadir, it was nonetheless solid overall. The decline in temp wages was also less severe than in October. Nonetheless, these trends point to further weakness in official employee earnings data in the months ahead. 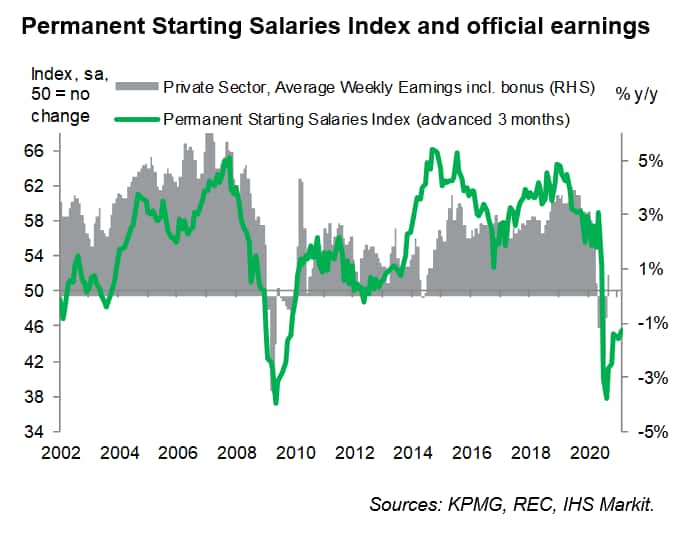 Outlook for 2021 brightens amid vaccine news

On a brighter note, the latest UK PMI data showed business confidence rose to its highest since early-2015 in November, as firms anticipate that the impact of the pandemic on business operations would ease substantially over the next 12 months. The recent news of a vaccine rollout across the UK is likely to further bolster confidence for the year ahead, and adds to hopes that businesses will feel more inclined to press on with projects and hiring in 2021.

The UK PMI and Report on Jobs surveys will be important steers as to the speed and strength of any recovery in the months ahead.