The UK’s first drug approval via Project Orbis - pulling away from the EMA strings?

In early May, the UK Medicines and Healthcare Products Regulatory Agency (MHRA) approved a targeted anticancer drug, AstraZeneca's Tagrisso (osimertinib), for a key niche indication - early adjuvant use in EGFR-mutated mid-to-late-stage non-small-cell lung cancer (NSCLC). While this was not the first approval for Tagrisso in the UK, it was noteworthy for another reason - it marked the first UK regulatory filing to have been routed via the multinational Project Orbis collaborative review scheme, since the MHRA formally joined as a member on 1 January this year. And significantly, while Tagrisso's first approval for the new indication was in the US last December, the UK had still pushed ahead of its European Union neighbors, with the European Medicines Agency (EMA) yet to finalize its authorization.

New collaborations in the post-Brexit environment

The Project Orbis joint initiative was originally set up as a grouping of well-regulated markets, formed with the aim of conducting marketing authorizations of promising drugs, with shared resources and expertise. It was founded in September 2019 by the United States, joined shortly after by Australia, Canada, and Singapore. More recently, Brazil and Switzerland signed up, closely followed by the UK from January this year. At the same time in January, the UK also joined the Access Consortium (formerly the ACSS Consortium) - a similarly structured but more diminutive regulatory grouping, currently shared with Australia, Canada, Singapore, and Switzerland.

The UK acted as an observer on both groups from October 2020, then graduated to full participant status at the turn of the year - coinciding with its final severance from the European Union and the EMA. Both new collaboratives carry out concurrent regulatory evaluations of specific medicines, with sharing of expertise and more efficient use of resources and time. Once the shared basic evaluation is complete, the member markets roll out independent approval decisions for their own markets. Products that have so far completed the Project Orbis approval process in at least one market (mostly for cancer) are listed below. 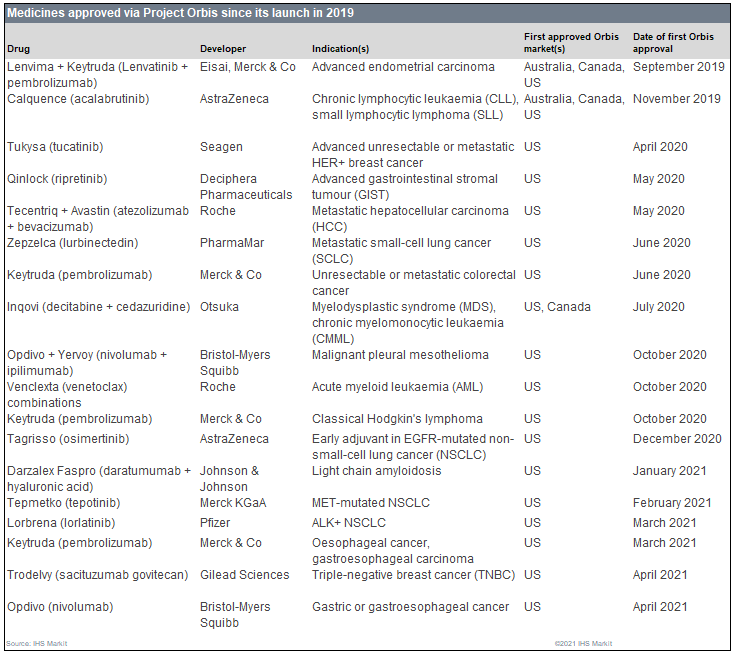 Moving on from the EMA - though not entirely

It was no accident that the UK's membership of both Project Orbis and the Access Consortium coincided with the end of the Brexit transition period, and the start of independent MHRA evaluations separately from the EU centralized processes. However, it should be noted that the UK has not entirely severed its links with the EMA - and indeed part of the UK (Northern Ireland) still operates its approvals under the EMA, with the MHRA's decisions only covering England, Scotland, and Wales. In addition, for a two-year period (in the first instance), the MHRA has begun to operate accelerated "decision reliance procedures", where companies may apply for rapid MHRA authorization filings streamlined closely with EMA approvals, avoiding many duplications of effort from both applicants and regulator. One of the first medicines to follow this route was Amarin's Vazkepa (icosapent ethyl), which was approved by the MHRA in late April this year, less than one month after its EMA authorization.

The fact that Northern Ireland still operates within the EU on a regulatory and trade basis for medicines has already begun to generate some anomalies - such as the availability of some medicines in Northern Ireland before or after the rest of the UK. Indeed, the current Tagrisso approval by the MHRA before the EMA is a case in point - and has already raised complaints from patient groups in Northern Ireland, since they cannot yet access this medicine for the early adjuvant NSCLC indication, in contrast to the rest of the UK.

Orbis and beyond- a glimpse of the future?

When the UK announced its decisions to join Project Orbis and the Access Consortium last October, one of the main aims was to ensure the UK retained a position early in the international approval timeline after its departure from the EU. Certainly, the prominence of the US in Project Orbis, and the focus of the scheme on oncology, make it an attractive route for early UK market access to innovative cancer medicines (such as Tagrisso), given that the US is often the first-launch destination for innovative anticancer drugs. Another attractive feature of the Orbis and Access schemes to the UK government was the ability of member nations to retain independence on the final verdict after joint review - in contrast to the EMA, where member states must comply with final authorization decisions. However, the two new schemes, while likely to expand significantly, are still relatively limited in range and coverage - and from the UK's perspective, they could not be seen as an equivalent replacement in scale at this stage for its former direct involvement in EMA mutual recognition and centralized review procedures.

The timing of the UK MHRA's partnerships in both schemes, from the day after final severance from the EU, has given a strong signal that the MHRA does not plan to rely entirely on standalone decisions, or on accelerated reviews of EMA-approved drugs. Experimentation with non-EMA collaborative review groupings further afield such as Orbis and Access, and other multinational consultation mechanisms as they grow in popularity and evolve, could be regarded as a glimpse into the MHRA's post-Brexit future, although whether this will represent any clear advantage over its former membership of the EMA remains to be seen.