On 20 September 2017, at the United Nation's General Assembly (UNGA), Ukrainian President Petro Poroshenko called for the deployment of a UN-led peacekeeping mission to the Donetsk and Luhansk regions of Ukraine that would "facilitate restoration of Ukrainian sovereignty and not freeze the conflict" in Donbass.

Poroshenko's statement was aimed at reviving the initiative on the peacekeeping mission to Donbass, the areas of armed conflict in eastern Ukraine since April 2014, which have been in a stalemate since early 2015. Although the conflict in Donetsk and Luhansk regions geographically stabilised in February 2015 along the line of contact (LoC) between the Ukrainian government forces and the pro-Russian separatist militias, there are continued outbreaks of localised fighting and a fluctuating rate of daily ceasefire violations along the LoC.

Ukraine has been calling for the deployment of peacekeepers in Donbass since early 2015, but Russia and the separatist entities in Donbass have opposed this initiative. However, Moscow's tone changed earlier this month: on 5 September 2017 Russian President Vladimir Putin called for a UN peacekeeping mission to be deployed in Donbass. The same day, Russia submitted to the UN Security Council its draft resolution authorising the deployment. This triggered a counter-proposal by Ukraine on the following day.

The Russian government, which views the conflict in Donbass as an internal Ukrainian conflict or a civil war, and does not acknowledge Russia as a party to the conflict, now proposes the adoption of a UN mandate for a six-month peacekeeping mission. The mission would be peace-keeping, rather than peace enforcement, authorised to use force only in self-defence, meaning that it would only be equipped with light weapons. Russia stipulates the following conditions in its proposal:

The OSCE SMM, consisting of 600 unarmed observers with the role of monitoring the security situation in eastern Ukraine, has been deployed in the Donetsk and Luhansk regions of Ukraine since March 2014. Its mandate was further expanded geographically to monitor the implementation of both the Minsk ceasefire agreement of September 2014 and Minsk II ceasefire agreement of February 2015. The SMM reports, on almost a daily basis, obstructions to its mandate, such as restrictions of freedom of movement or violence and direct threats against SMM representatives, mostly by separatist militias in DPR and LPR. In the first six months of 2017, the OSCE SMM reported 480 such incidents, 75% of which occurred in the areas controlled by the DPR and LPR.

For instance, in April 2017, an OSCE SMM vehicle was hit with an improvised explosive device (IED) as two armoured vehicles carrying six SMM representatives were driving on a secondary road near Pryshyb, Luhansk region, in the LPR-controlled territory. A US citizen working as a paramedic died and two monitors were wounded. Under the terms of the Minsk ceasefire agreement, signed on 19 September 2014 between Russia, Ukraine, DPR and LPR, all sides committed to the cessation of laying of mines and IEDs as well as the removal of all existing mines. After the April 2017 explosion, the OSCE Mission on Ukraine changed its operating procedures, limiting its observer patrols to paved roads.

Ukraine insists on a broader mandate and Russian exclusion

In its own draft proposal Ukraine stipulated several conditions to the UN Security Council, which significantly differ from the Russian proposal. Ukraine demands that Russia, which Kiev views as a party to the conflict, which provides political, financial and material assistance to the DPR and LPR separatist militias, is excluded from participation in any peacekeeping mission. Ukraine also insists that DPR and LPR are not parties to the political co-ordination on the deployment. In September 2017, both separatist entities, which had previously strongly opposed any peacekeeping mission's deployment, agreed to the Russian proposal.

The key disagreement on the proposal is the geographical mandate of the peacekeeping mission. Although Russia wants it limited to the LOC, Ukraine is seeking a deployment covering the entire conflict zone, including the 425-km long stretch of the Russo-Ukrainian border, currently controlled by the breakaway DPR and LPR. Citing credible evidence, Ukraine claims that this stretch of the border is used by Russia to supply the Donbass separatist entities with weapons, materials and military personnel.

Germany, France and the US have all indicated their support in principle for the deployment of a UN peacekeeping mission. However, Western countries have indicated preference for the Ukrainian proposal to deploy peacekeepers to the entire area of the Donbass conflict.

If the differences between the two proposals are overcome, which currently appears unlikely, preparation for deployment of a peacekeeping mission in Donbas would take six to nine months. Such a deployment would be likely to substantially decrease the number of shelling incidents across the LoC, especially near Mariupol, Donetsk, Horlivka and Luhansk, reducing death and injury and civil war risks in the region. However, as Russia and Ukraine are very likely to reject aspects of the other's proposals and insist on their own conditions, a UN peacekeeping mission is unlikely to be sent to Donbass within the next 12 months. Both Ukraine (as the host government for any UN mission) and Russia (as a permanent member of the UNSC) are in a position to block any UNSCR which contains conditions they consider unacceptable. Furthermore, the United States, a leading provider of funding to UN-led peacekeeping operations (28.5%), is currently considering significant cuts to its UN funding.

IHS Markit assesses that the negotiations on the peacekeeping mission are most likely to continue in the one-year outlook, and no deployment will take place, with the armed conflict to continue in its current form. Russia will seek to use the failure to reach an agreement as evidence of the Ukrainian government's intransigence, claiming that it is blocking a political solution. Although Russia would, under diplomatic pressure, be likely to agree to expanding the geographical mandate of the mission to additional areas under the control of DPR and LPR, it would still be likely to insist the mission's exclusion zone from the Ukraine-Russia border. Russian agreement to a UN mission would likely also be conditional on Russian participation. This would likely be unacceptable to Ukraine, on the grounds of alleged Russian military connivance with separatist militias, and the expected consequence is that it would freeze the conflict, as it has in conflicts in Moldova or Georgia in the early 1990s, but would prevent a peaceful resolution.

If Ukraine's Western sponsors pressure Ukraine to a compromise on Moscow's terms, the deployment of the peacekeeping mission would likely transform the Donbass conflict into a frozen one, similar to that in Transdniestria in Moldova, a frozen conflict since 1992. In the longer run, such a scenario would lead to further distancing between the breakaway DPR and LPR with the rest of Ukraine. DPR and LPR would likely evolve as de-facto Russian protectorates, politically and economically linked to Russia and increasingly separated from the rest of Ukraine. This would prevent any Ukrainian aspiration to re-integration of Donbass. Failure to regain sovereignty over Ukrainian territory in Donbass would further restrict any Kiev plans to progress on the road to potential EU or NATO membership. It would be a potential game-changer were the US and the West to apply sufficient pressure on Ukraine, which depends on funding from its Western sponsors and international financial institutions, to make concessions. 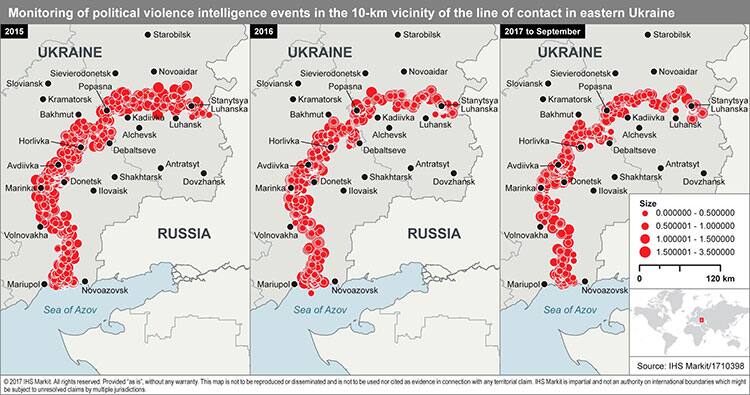