UK unemployment set to soar as employment is hit by pandemic

The jobless rate looks set to soar in the UK despite government efforts to help companies retain staff, as firms lay off workers and drastically reduce their demand for new staff. Pay growth has meanwhile slumped, adding to worries that consumer spending will be hit by both rising unemployment and falling incomes.

The downbeat official data largely corroborate worrying falls in recent survey data, but encouragingly the latter fuel hopes that April will be have been the worst month in terms of lay-offs and falling employment.

Jobless claimants at highest since 1993

Data from the Office for National Statistics showed the number of people claiming unemployment benefit to have risen by a further 528,000 in May, adding to just over a million new benefit claimants that were recorded in April. At 2.8 million, the claimant count total is now its highest since 1993, greatly surpassing the peak of just over 1.6 million seen at the height of the global financial crisis. 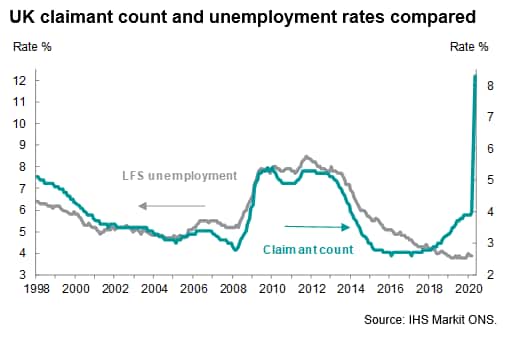 Oddly, the unemployment rate, data for which lag the claimant count, held steady at 3.9% in the three months to April. The stickiness of the unemployment rate in April is largely due to the fact that furloughed workers are still being counted as employed, with many also eligible for out-of-work benefits too, which also helps to explain the steep increase in overall claimant counts. Note that the standard definition the ONS uses for being unemployed is someone who is without a job, has been actively seeking work in the past four weeks and is available to start work in the next two weeks, or alternatively who has found a job and waiting to start work in the next two weeks.

Experimental data for May meanwhile indicated that the number of payroll employees fell by 162,502 having already plummeted by 449,376 in April, as employers continued to reduce staff numbers in the face of the pandemic. Payroll employee numbers have now fallen continually since February.

While Labour Force Survey employment data do not yet show the impact of the pandemic, more up to date IHS Markit/CIPS PMI data - which correlate well with historical employment statistics - has highlighted both a likely surge in unemployment numbers and a collapse in employment.

The concern is that many of the jobless people who have likely resulted from the 624,000 drop in payroll numbers since February have simply not been looking for new work due to the lockdown, meaning the unemployment rate will likely soar when they become active job seekers. Furthermore, unless demand starts to rise soon, companies may have to lay off many of the furloughed workers. 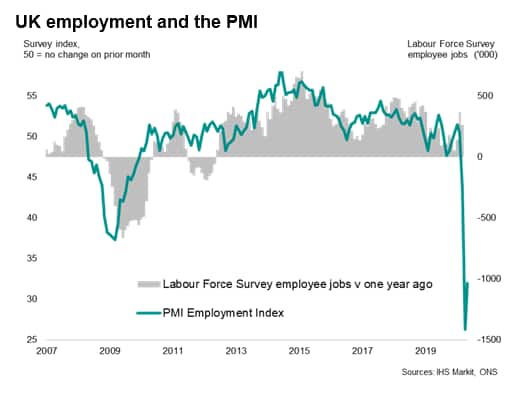 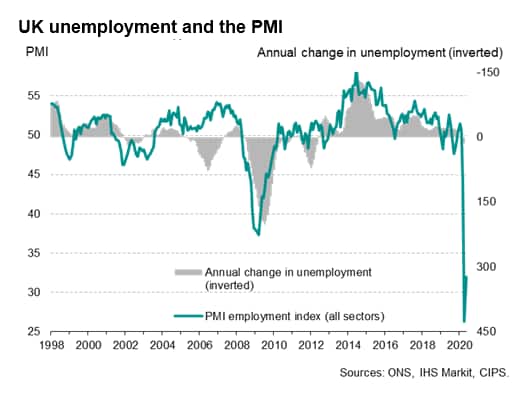 In terms of employers' demand for staff, vacancies fell by a record 165,000 in the three months to May, the latest month for which data are available. Vacancies have now dropped to 476,000, down some 342,000 since the three months to February, which is more than three times the prior record fall seen over such a brief period since data were first available two decades ago.

Some encouragement comes from both the loss of vacancies and survey data showing moderating rates of decline in May. In particular, the REC/KPMG survey of UK recruitment agencies indicated a record collapse in demand for staff in April, but a more moderate - though still severe - downturn in May. Data for June are published 8th July. 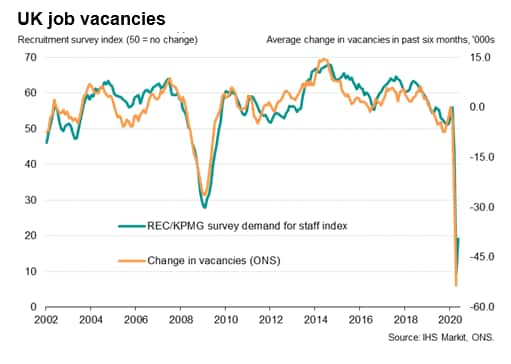 Pay growth slides to lowest since 2014

Pay growth meanwhile slowed sharply. Total pay rose at an annual rate of just 1.0% in the three months to April, its lowest for five and a half years. Excluding bonuses, the rate of increase held up slightly better at 1.7%, though that was still its lowest since early-2015, and private sector pay growth (excluding bonuses) was a mere 1.3%, dropping at an annual rate of 0.8% in April alone.

Looking at single month pay data, which it should be noted are volatile at the best of times, the steepest downturn in pay was seen in construction, down 8.5% on last year, followed by retail and hospitality, where pay dropped 3.7% on a year ago, and then manufacturing, which saw a 2.5% decline. Outside of the public sector, where April saw pay growth merely easing to 3.0%, earnings growth held up best in financial and business services (a 1.8% annual rise).

While the recent survey data hinted that the collapse in demand may have peaked back in April, no such bottom has yet been seen for pay growth: May's recruitment industry survey indicated the steepest fall in pay since 2009. 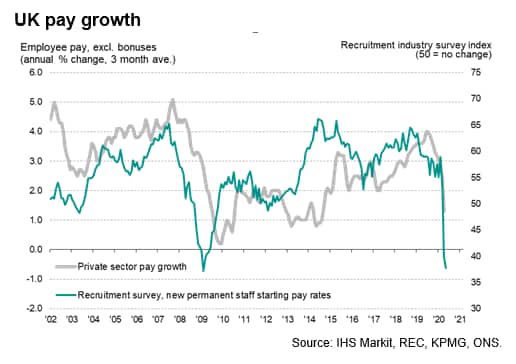