The UK economy showed signs of steadying in February, albeit with business activity remaining sharply lower than late-last year due to the ongoing national lockdown. However, while the downturn in the hard-hit service sector came close to stabilising, the manufacturing sector's performance worsened amid Brexit-related export losses and supply chain disruptions.

Although the data hint at a renewed contraction of the economy in the first quarter, the outlook continued to brighten. Business expectations for the year ahead improved to the highest for almost seven years, as companies look forward to the vaccine roll-out allowing virus-related restrictions to ease. 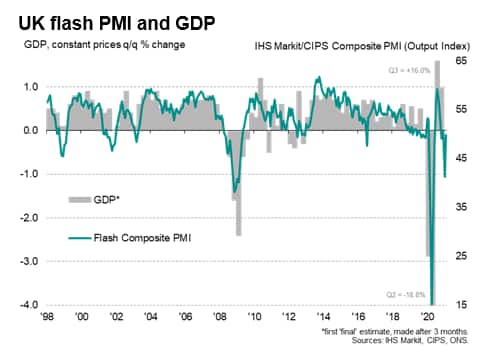 Economy pulls back from steep decline

The headline index from the survey, the seasonally adjusted IHS Markit/CIPS Flash UK Composite PMI - based on around 85% of monthly replies, rose sharply from 41.2 in January, its lowest since last May, to 49.8 in February. By remaining below the 50.0 no-change mark the PMI still indicated a contraction of business activity, but the decline was only very marginal.

It's important to bear in mind that the February PMI merely indicates a near-steadying of economic activity in February following one of the steepest falls in output seen for over a decade in January as renewed lockdown measures were applied to control the spread of coronavirus disease 2019 (COVID-19), including a third national lockdown in England and school closures. In other words, activity has steadied at a low level amid the ongoing lockdown.

The average reading so far for the first quarter, at 45.5, consequently suggests that the economy likely slipped back into decline after GDP rose by 1.0% in the fourth quarter of last year (a period when the PMI had likewise rebounded to an average reading of 50.5). However, the drop in GDP signalled for the first quarter so far remains far less than the fall seen in the spring of last year.

February saw service sector activity come close to stabilising after falling sharply in January as new lockdown measures hit. The services activity index rose from 39.5 to 49.7. Business and financial services recovered to register modest expansions, though the hospitality sector, including hotels and restaurants, remained in steep decline, as did the transport and travel sector, despite rates of contraction moderating considerably compared to January.

The manufacturing sector's output index meanwhile dipped from 50.7 in January to 50.5 in February, indicating only a marginal expansion of production and the weakest rise in output since the sector's recovery began last June. The worsening trend in manufacturing growth suggests the goods-producing sector's recent resilience is waning, and in part reflects an unwinding of pre-Brexit stockpiling seen at the end of last year, as well as widespread supply shortages and delivery delays, notably for imported goods. 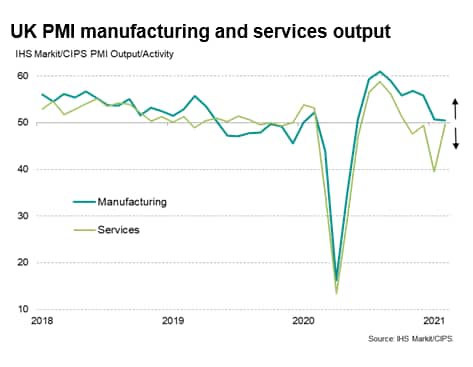 In addition to domestic demand being adversely affected by the ongoing lockdown, both manufacturing and service sector companies saw exports fall again in February, the latter seeing a particularly sharp decline due mainly to tighter restrictions on international travel. Survey respondents also reported difficulties fulfilling orders to existing clients in the EU due to higher costs and transportation delays. 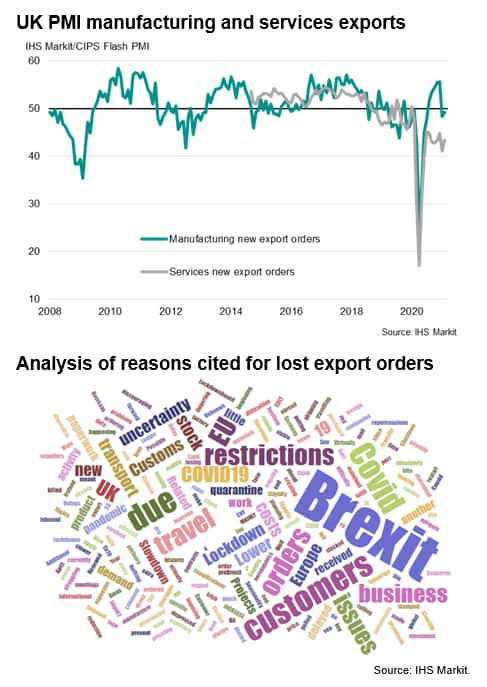 In the service sector, of those companies reporting lower overseas sales, 70% attributed the loss to COVID-19, although a further 23% blamed factors relating to Brexit. In manufacturing, however, Brexit was seen as a more dominant cause of lost exports and the pandemic. While 26% of manufacturers reporting a drop in exports linked the decline directly to COVID-19, more than twice as many (some 56%) linked the decline to Brexit.

A widespread issue facing manufacturers was the delay in obtaining supplies of inputs due to the combination of COVID-19 and - more commonly - Brexit, with the UK's transition period with the EU having ended on 31st December. February consequently saw the second-greatest lengthening of suppliers' delivery times since the manufacturing PMI survey began almost 30 years ago, with the incidence of delays exceeded only by those seen last April at the height of pandemic-related global factory closures. 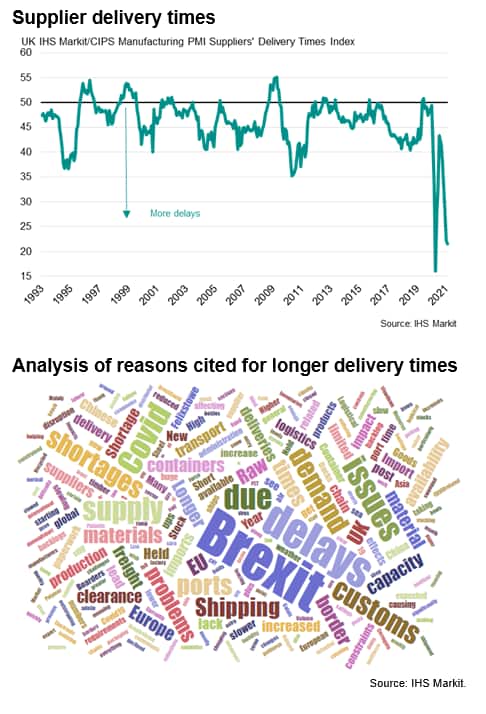 These shortages contributed to a second month of falling input purchases and raw material inventories at UK manufacturers, as well as the steepest fall in post-production inventories since 2009.

An additional consequence of supply limitations was a rise in prices. Average prices paid by manufacturers for inputs showed the largest rise since January 2017, feeding through to the steepest rise in prices charged at the factory gate since April 2017. 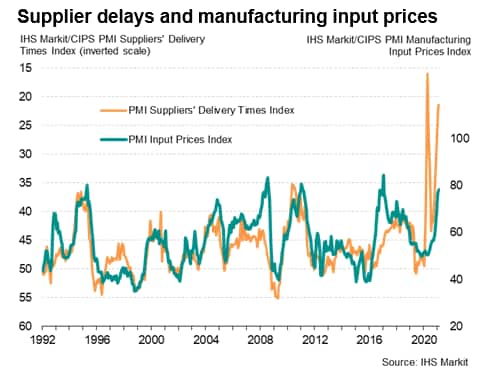 Input costs in the service sector meanwhile registered the largest rise for a year, pushing prices charged up at the fastest rate for 12 months. 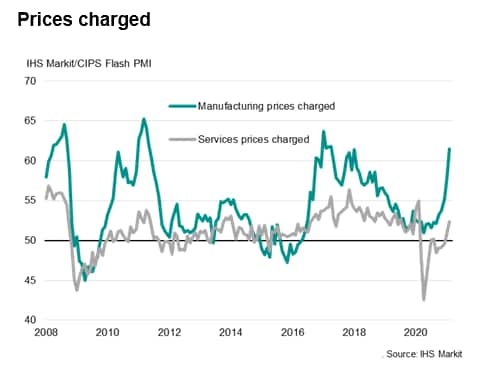 Combined, average prices charged for goods and services rose in February at a rate not seen since February of last year, hinting at a possible further increase in consumer price inflation, which edged higher to 0.7% in January. 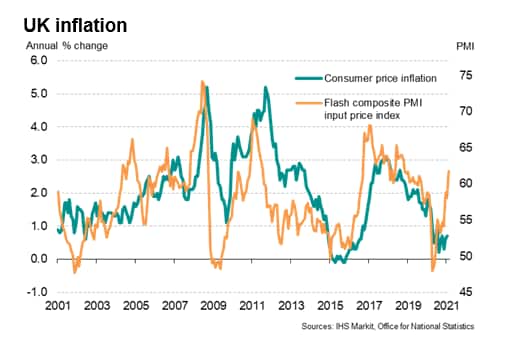 Finally, although businesses are reporting a tough start to the year, prospects continued to improve. The flash PMI index measuring business expectations for the next 12 months rose in February to the highest since April 2014. Survey respondents overwhelmingly attributed their positive business expectations to a successful vaccine roll-out during 2021. However, there were still many reports citing concerns about the long-term impact of Brexit on business operations. 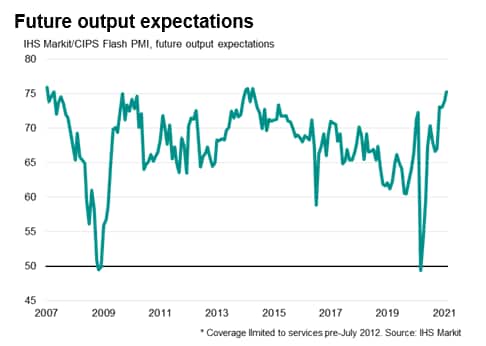