A slight upturn in the pace of economic growth signalled by the December PMI surveys failed to prevent the economy from suffering one of its most disappointing expansions since early-2013. Increased preparations for a potentially disruptive 'no deal' Brexit provided a temporary boost to both output and order books, but heightened Brexit uncertainty continued to compound a broader economic slowdown.

Growth of business activity grew at a slightly increased rate in December but remained sluggish. At 51.6, the IHS Markit/CIPS 'all-sector' PMI rose from 51.0 in November, but that was still the second-lowest reading since July 2016.

The meagre expansion seen in December means the economy grew only modestly in the closing quarter of 2018. With the exception of the downturn seen in the immediate aftermath of the 2016 referendum, the expansion signalled by the surveys in the fourth quarter was the weakest since the first quarter of 2013, and indicative of the economy growing just 0.1%. 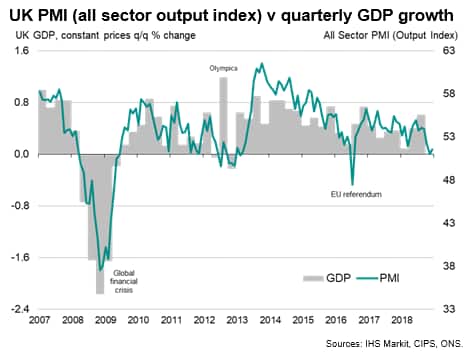 New order inflows grew at the fastest rate for three months, but still only registered a moderate improvement. New order growth over the fourth quarter as a whole was consequently the second-weakest for six years.

Manufacturing growth meanwhile slipped back closer to October's post-referendum low, ending the sector's worst quarter since 2016 and indicating a likely mild drag from manufacturing on GDP in the fourth quarter. 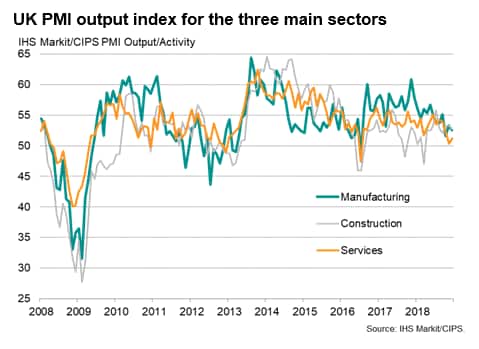 Worryingly, even the modest growth of output and order books seen in December in part reflected heightened activity in preparation for a possible disruptive 'no deal' Brexit next year. Manufacturers often reported to need to source components and ship goods to customers ahead of potential supply chain or transport delays, resulting in a surge in new orders and near-record levels of inventory building. Construction sector companies likewise often reported the need to complete projects or source materials ahead of the UK's departure from the EU. Similar evidence was also seen among some service sector companies.

Falling levels of back orders suggest growth could weaken further in coming months. Backlogs of work decreased for a third month running in December, indicating the longest period of decline since 2016. The fall suggests current business activity growth was only achieved by firms eating into back orders, thereby suggesting that operating capacity could be reduced in coming months unless new order inflows pick up. Backlogs fell in both manufacturing and services. Employment growth fell to the lowest since August 2016 as firms took a more cautious approach to hiring. Construction hiring slowed sharply but remained more robust than the marginal gains seen in both manufacturing and services, which have seen solid hiring trends stall to near-stagnation.

Firms are also taking an increasingly cautious stance on investment. The survey data follow recent confirmation from the Office for National Statistics that the economy grew by a strong 0.6% in the three months to September, albeit with the official data also indicating that business investment fell for a third consecutive quarter.

The survey evidence suggests the recent drop in investment has likely been due to increased anxiety over Brexit, and that the decline may have escalated in the fourth quarter. The PMI data showed new orders for investment goods (such as plant and machinery) falling for the second time in three months in December despite exports of such goods rising, hinting at reduced domestic investment spending.

The rate of increase of average selling prices for goods and services meanwhile ticked up to the highest since last June as firms passed higher costs on to customers. Although cost pressures eased to the lowest for eight months, the rate of input price inflation remained elevated. Lower oil prices were offset by the inflationary impact on import prices from the weakened exchange rate, as well as higher wages and salaries. 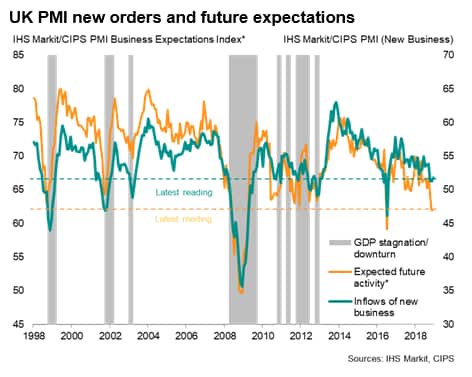 The weakness of the pace of current economic growth to near-stagnation in the fourth quarter was accompanied by further gloomy prospects for the year ahead. Although optimists continued to outnumber pessimists on balance, the overall gauge of sentiment regarding expectations of output in the year ahead was the third-lowest since comparable data were first available in 2012 (measured across all three sectors), with only November and July 2016 seeing darker business moods. Brexit was once again by far the most commonly cited cause of concern about the year ahead. 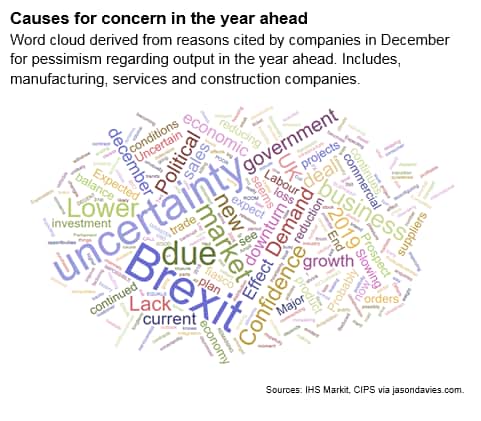 The current low level of the PMI would normally be sufficiently weak to have triggered a cut in interest rates or other stimulus from the Bank of England in order to revive demand and avoid further downward pressure on future prices. However, the Bank of England views the current soft-patch as temporary, reflecting the intensifying Brexit uncertainty, and has hence held policy steady since a unanimous decision to hike interest rates back in August. 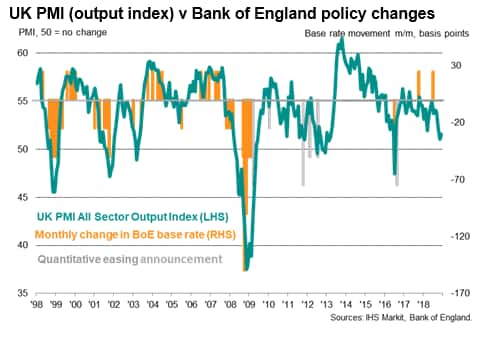