April's PMI surveys indicated only a marginal rise in UK business activity, suggesting the economy remained more or less stagnant at the start of the second quarter. Although firms grew more optimistic about the outlook, linked in part to a reduced threat of an imminent 'no deal' Brexit, forward-looking indicators such as order books and backlogs of work hint at a near-term sustained weakness of demand, which has already filtered through to a reduction of employment.

The IHS Markit/CIPS 'all-sector' PMI rose from 50.0 in March to 50.9 in April, climbing above the no-change level but remaining indicative of the economy stalling when compared to official GDP data. The disappointing start to the second quarter follows a first quarter in which the average PMI reading was the lowest since late 2012. 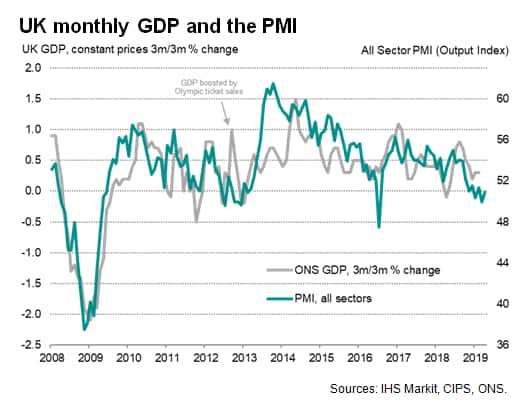 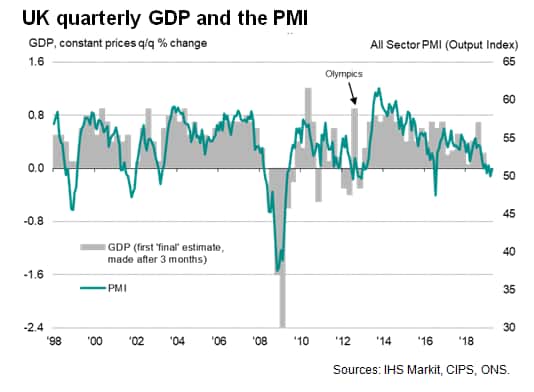 Although both the service sector and construction returned to growth, in both cases the expansions were only marginal. An upturn in manufacturing meanwhile showed signs of waning, as a temporary boost from Brexit-related stock piling faded. 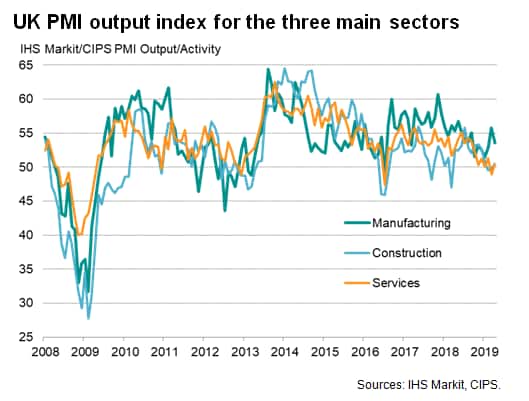 Economy's resilience to be tested

The recent weakness of the survey data has contrasted with more buoyant official data: according to initial estimates from the Office for National Statistics, GDP expanded by 0.3% in the three months to February, outpacing the signal from recent PMI surveys. Historical comparisons with GDP suggest that the PMI signalled a flat first quarter.

However, it would be highly unusual for the economy to at least not lose substantial momentum when the PMI has sunk to the low levels seen in recent months. [*]

As such, the survey data suggest strongly that the underlying pace of GDP growth has weakened and that this will feed through to the official data in future GDP readings.

Other survey indicators added to the gloomy picture in April. Inflows of new business fell for a fourth successive month, dropping in both services and construction alongside weaker growth in manufacturing. Output growth consequently outpaced that seen for order books to an extent not exceeded since 2011 with the exception of May 2016 (just prior to the referendum).

Backlogs of work declined again, down for a seventh straight month in April and falling at one of the sharpest rates seen over the past six years. 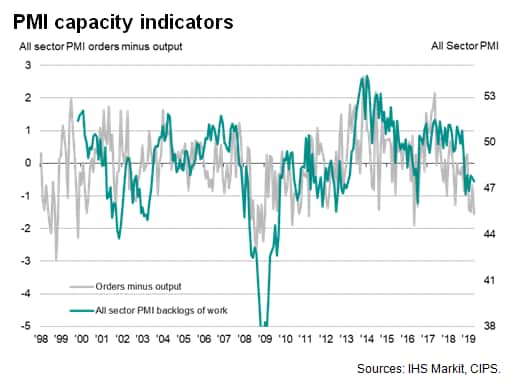 Amid these signs of excess capacity, employment came under further pressure in April. The PMI surveys recorded the third (albeit very modest) drop in employment seen so far this year, with marginal cuts to headcounts registered in all three sectors.

Reduced headcounts also in part reflected widespread uncertainty about future business conditions, though April did see future expectations improve to a seven-month high, linked in part to worries easing in relation to a potential 'no-deal' or 'hard' Brexit. 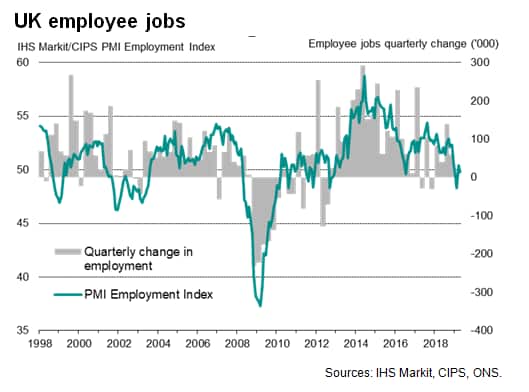 Inflationary pressures meanwhile ticked higher, through remained somewhat subdued. Average input costs across the three sectors rose at the fastest rate since January, in part reflecting the pass-through of higher oil prices. Average selling prices for goods and services also rose at an increased rate. However, rates of growth for both costs and selling prices remained below the averages recorded last year and among the weakest seen since the summer of 2016. 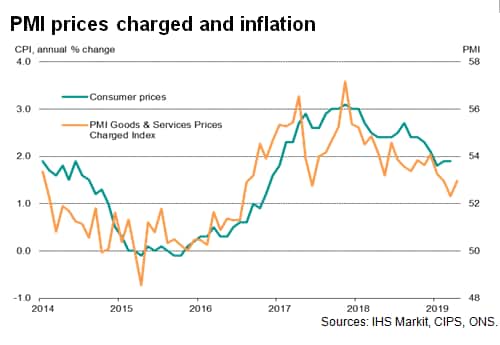 Looking further into the detail of the three PMI surveys, the service sector recorded the weakest expansion, though the marginal increase in activity seen in April was an improvement on the decline recorded in March, which had been the first such fall in service sector activity since the dip after the Brexit vote.

Only very marginal growth has been recorded by the services PMI on average in the year to date, contrasting with the robust expansion seen up to last autumn. Particularly disappointing performances have been recorded for financial services, hotels and restaurants, transport and communication and other consumer services, all of which have seen activity fall so far this year. The strongest growth has been seen for computing and IT, with a subdued gain also registered among business-to-business services.

Although business expectations in the service sector lifted to a seven-month high, inflows of new business fell for a fourth successive month and levels of outstanding business dropped for a seventh straight month, hinting that further weakness lies ahead. 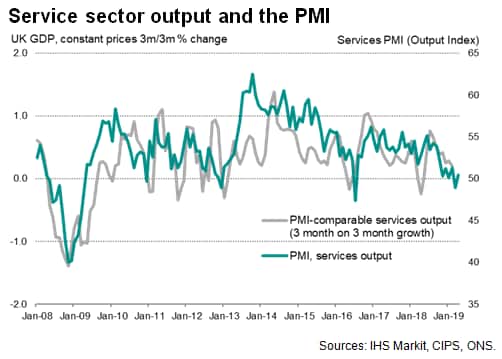 The construction industry likewise reported a very modest increase in activity, representing a welcome stabilisation after two months of marginal falls in output. However, commercial activity - a key barometer of private sector investment in fixed assets such as offices, factories and retail space - continued to fall at a marked pace, down for a fourth successive month. Overall orders for new construction work also fell at the steepest rate for just over a year, boding ill for growth in coming months. 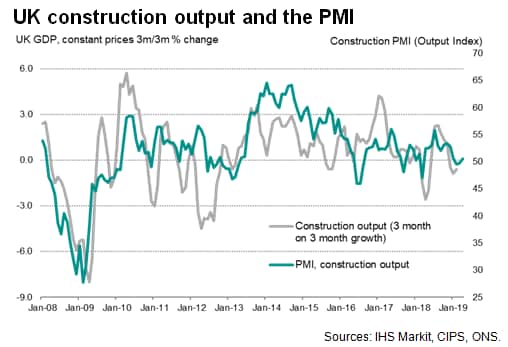 Manufacturing was consequently the only one of the three major sectors to report any significant growth in April. However, even here the rate of expansion waned amid a decline in the number of firms reporting a boost to production from pre-Brexit ordering. One-in-five companies that reported an increase in production attributed the rise to Brexit related stock piling, down from one-in-three in March. 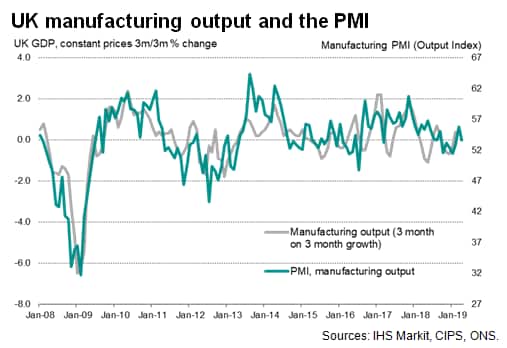 The unwinding of this inventory building is likely to act as a drag on production growth in coming months, as illustrated by the forward-looking new orders to inventory ratio. A record increase of inventories in recent months has coincided with a relative dearth of new orders, pushing the orders-inventory ratio to its lowest since May 2012, and its third lowest since the height of the global financial crisis in early-2009.

All three sectors were therefore struggling to sustain growth of output and hiring in April, and appear set for further weakness in the near-term. Both GDP and labour market data could therefore disappoint in coming months.