Disappointing PMI surveys indicates that the UK economy contracted in March, stalling over the first quarter as a whole and at risk of sliding into a deepening downturn in coming months.

The IHS Markit/CIPS 'all-sector' PMI fell from 51.4 in February to 50.0 in March. With the exception of the brief decline seen in the immediate aftermath of the 2016 EU referendum, the March reading was the lowest since December 2012. The decline also pushes the first quarter average to the lowest since the fourth quarter of 2012. 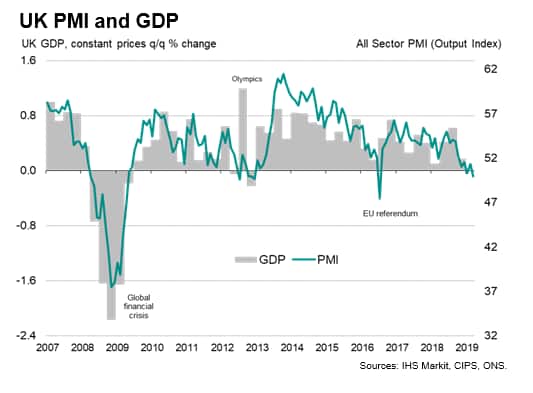 The all-sector PMI is a weighted average of the three surveys covering manufacturing, construction and services, and the resulting output index correlates closely with GDP. The latest reading is consistent with the economy contracting at a quarterly rate of 0.1%, cancelling out the 0.1% rise indicated by the PMI surveys in February, to leave the surveys pointing to a flat first quarter as a whole.

The deterioration was led by a renewed downturn in the service sector. With the exception of the post-referendum decline in July 2016, the drop in services activity was the joint-steepest since April 2009.

Construction output also fell, down only marginally but notably dropping for a second successive month to register the first back-to-back monthly decline since the summer of 2016.

Only manufacturing recorded any growth, and even here the survey indicated that pre-Brexit stockpiling drove the increase in production. Inventories of finished goods and raw materials showed survey-record increases as companies built up reserves in case of potential supply problems in coming months. Such stockpiling naturally poses downside risks to future production. 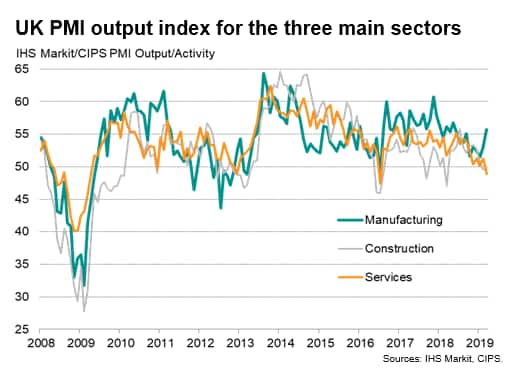 A third successive monthly decline in new orders added to the gloomy near-term outlook. Measured over the first quarter as a whole, the three-month fall in new orders was the steepest since the second quarter of 2009.

A third successive fall in service sector new orders was in part countered by modest gains seen in construction and manufacturing, though the latter was boosted by customers (both at home and abroad) stockpiling ahead of Brexit.

The lack of new work also led to a sixth consecutive monthly decline in backlogs of work, which is in turn indicative of excess capacity and often followed by firms reducing their operating capacity.

Although employment rose marginally, up for the first time in three months, the overall rate of job creation remained among the weakest since 2012, highlighting widespread caution among companies in respect to hiring amid the increasingly uncertain business outlook. Survey responses also indicated that hiring was buoyed by a temporary need to boost activity ahead of Brexit, suggesting the rise in payroll numbers could reverse in coming months. 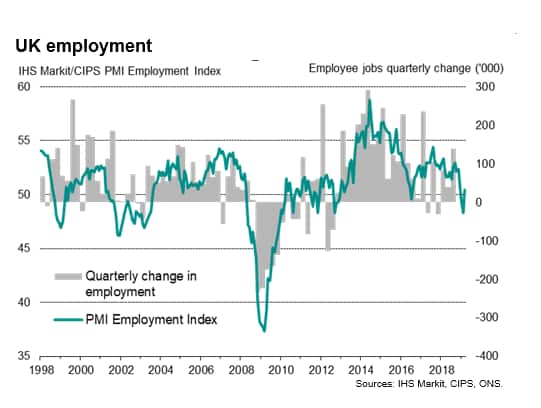 Business optimism regarding the next 12 months ticked up to a five-month high, having sunk in February to the lowest ever recorded by the survey with the exceptions of the height of the global financial crisis and July 2016. Confidence rose in all three sectors, but Brexit concerns dominated the survey responses, and meant the overall degree of sentiment remained well below the survey's long-run average. Optimism consequently remained at a level which in the past have typically preceded an economic downturn. 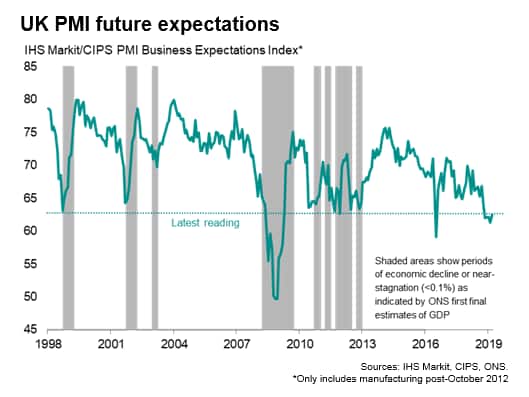 The stalling of economic growth was accompanied by the weakest rise in selling prices for goods and services since July 2016. The survey found an increased number of firms offering discounts to stimulate demand. The slower pace of selling price inflation was most evident in the service sector, though manufacturing also recorded a weaker rate of increase. 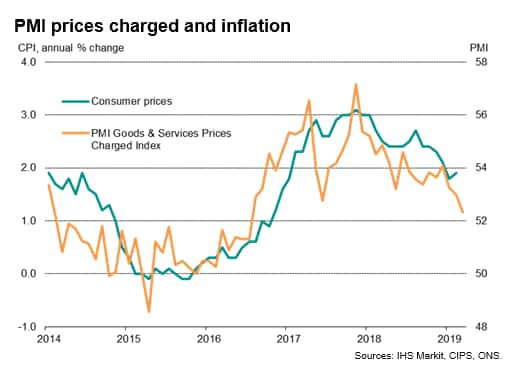 Average input price inflation accelerated slightly during the month, but also remained at one of the weakest rates seen since the summer of 2016.

The drop in the PMI's output price indices suggest that consumer price inflation could fall further in coming months, having ticked higher to 1.9% in February.

With the survey indicating that order books have shrunk at the steepest rate since 2009 so far this year, and that a potential pay-back from pre-Brexit stock-piling is on the cards in coming months, the risks to the near-term outlook have clearly intensified.

A stalling of the economy in the first quarter will therefore likely turn into a downturn in the second quarter unless demand revives suddenly which, given the recent escalation of Brexit uncertainty, seems highly improbable. Such a scenario leaves the current consensus forecast for the UK economy to grow 1.3% in 2019 looking far too optimistic. IHS Markit currently expects to see just 0.8% growth in 2019, and even this modest performance is perhaps somewhat hopeful given the recent lack of any Brexit developments.

The political developments surrounding Brexit will clearly play a large role in determining the outlook for business and the economy, and could swing demand either way. Some caution is required, however, as the recent wider malaise of global economic growth, especially in the euro area, poses a further headwind to the economy.

The headline PMI is meanwhile already in territory that would normally be associated with the Bank of England leaning towards more stimulus, but policymakers remain in a state of limbo while Brexit remains unresolved. The weakness of the surveys will nonetheless likely add to calls for the Bank to reverse one or both of its last two rate hikes, which look increasingly like policy errors, in the absence of any swift and smooth Brexit resolution.