The PMI surveys indicated that the UK economy stagnated in July, steadying after a contraction in June, but still signalling one of the worst performances since the height of the global financial crisis in 2009. Jobs growth meanwhile weakened as business confidence regarding the year-ahead outlook deteriorated.

Modest service sector growth helped counter the sharpest drop in manufacturing output for seven years and a construction sector that is mired in its deepest downturn since 2009.

The IHS Markit/CIPS 'all-sector' PMI rose from 49.2 in June to 50.3 in July, lifting marginally above the no-change level of 50. However, with the exception of the brief decline seen in the immediate aftermath of the 2016 referendum, lower readings have only been recorded six times since the global financial crisis in 2009, four of which were in the downturn of 2012 while two weaker months were seen earlier this year.

The latest reading is indicative of the economy stagnating at the start of the third quarter, having signalled a 0.1% contraction for the second quarter. 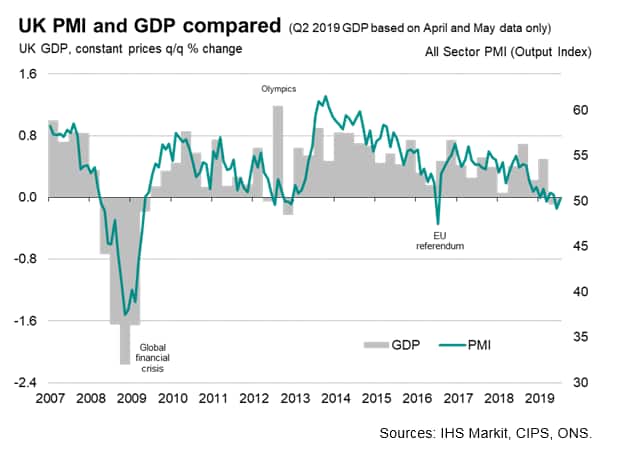 An improved rate of growth in the service sector to the highest since October was offset by further steep declines in manufacturing and construction output. Goods producers reported the quickest drop in production since July 2012 while the building sector suffered the second-sharpest drop in activity since mid-2009, with only June having seen a steeper fall. 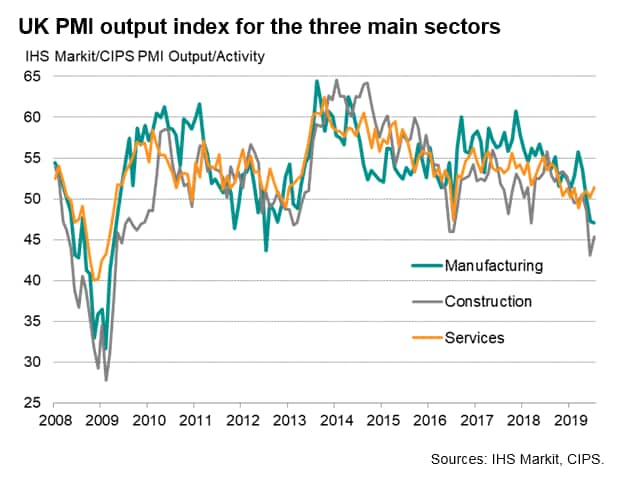 Service sector growth also remained subdued, constrained by a marked fall in business services activity. The latest drop in the business-to-business sub-sector of the services PMI has been exceeded only once (in July 2012) since the global financial crisis. 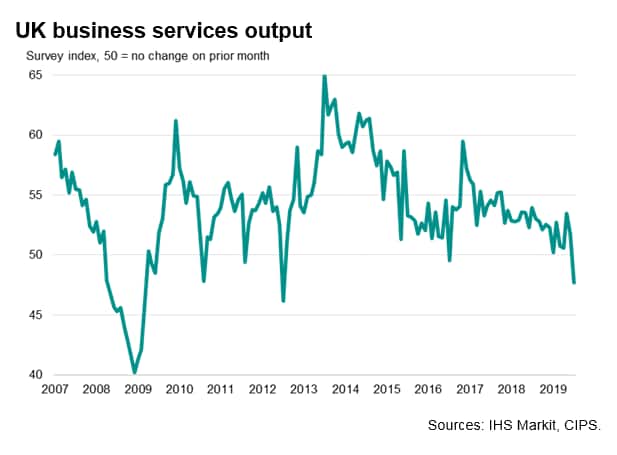 In contrast, the best performing sector was consumer services, highlighting how the economy remains dependent on consumer spending to avoid contraction.

Better news came in the form of a further rise in employment which, although weaker than that seen in June, was the second-fastest recorded for eight months. However, the labour market improvement was limited to the service sector. Both manufacturing and construction sectors reported increased job losses. 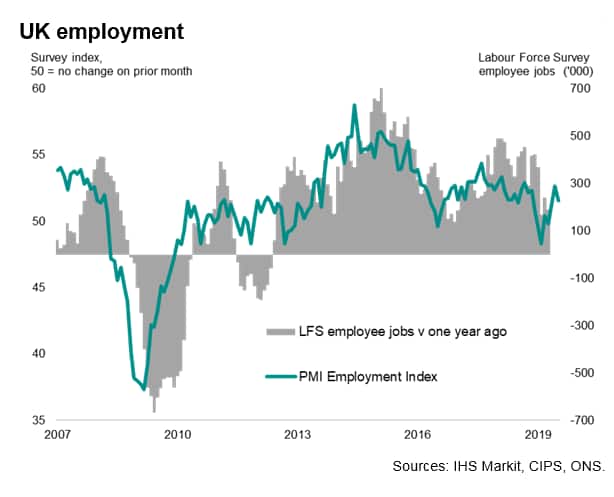 Furthermore, the combination of ongoing job gains and stagnant output means productivity is indicated to have fallen in recent months at some of the fastest rates registered in the two decades of survey history.

Inflationary pressures remained muted, despite some upward pressure from higher import prices arising from sterling's recent weakness. Average input prices across the three sectors rose at a pace that, though marked, was the slowest for three years, due to softer raw material price inflation in the manufacturing sector.

Average prices charged for goods and services also rose at one of the weakest rates recorded over the past three years, as firms increasingly competed on prices to help drive sales. 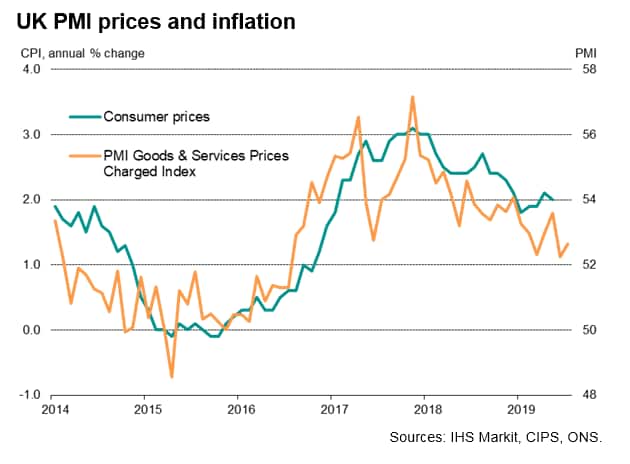 Forward-looking indicators hint at weakness persisting in coming months. Overall growth of new orders revived to show the strongest gain so far this year, but only services saw an improvement. Severe falls in demand were seen in manufacturing and construction.

The inflow of new orders was also insufficient to prevent a further marked decline in backlogs of work. With order backlogs being depleted, firms are likely to curb both their hiring and output in coming months.

July also saw a weakening of optimism about the business outlook. Businesses' expectations of their output growth in the year ahead fell for a second month. Apart from the lows seen earlier in the year and in the immediate aftermath of the 2016 referendum, the level of confidence was the weakest since comparable data were first available seven years ago.

Business worries continued to centre on Brexit-related uncertainty, concerns about slower economic growth at home and abroad, as well as wider geopolitical tensions and political uncertainty, especially in relation to trade wars.

The survey meanwhile sent mixed messages on whether UK companies were benefitting from the recent drop in the trade weighted value of sterling.

A key development in July was an upturn in exports of services, which countered a further sharp drop in goods exports, with better foreign sales of services often linked to the weakened pound. Growth of service exports hit the fastest rate for just over a year in July, led by improved trends in consumer-oriented sectors and financial services, whereas manufacturing exports fell at one of the sharpest rates seen over the past seven years.

The diverging performance for manufacturing and services exports is likely linked to a similar divergence in global economic growth for the two sectors: while trade war worries have pushed global manufacturing growth to its lowest since 2012, service sector growth has remained relatively robust in many countries, often linked to steady growth of consumer spending. 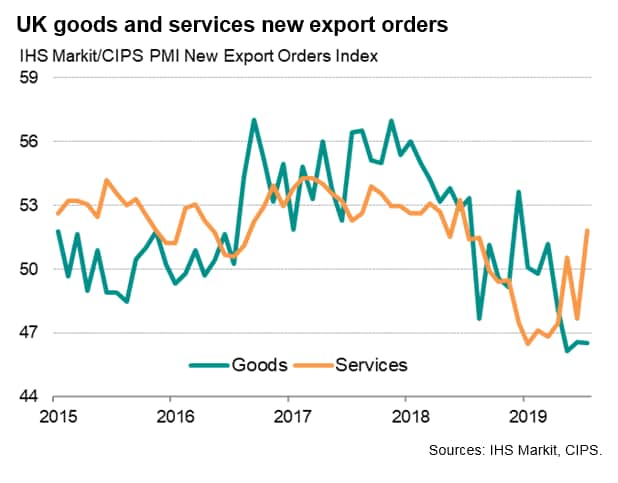