The PMI surveys indicated that the UK economy slipped into contraction in June, registering the second-steepest fall in output since the height of the global financial crisis in 2009. Although employment continued to rise, the resulting decline in productivity signalled was the largest in the survey's history.

The IHS Markit/CIPS 'all-sector' PMI fell from 50.7 in May to 49.2, dropping below the no-change level of 50 for the first time since July 2016. With the exception of the brief decline seen in the immediate aftermath of the 2016 referendum, the latest fall in output was the steepest since April 2009. The June reading alone is indicative of the economy contracting at a quarterly rate of 0.2%, and rounds of a second quarter for which the survey points to a 0.1% contraction of GDP. Output fell in both manufacturing and construction, and rose only marginally in services. While the drop in factory output was the quickest since October 2012, the decline in construction was even sharper and the steepest since April 2009. The near-stalling of service sector output was meanwhile one of the worst performances seen over the past decade. Within services, falling activity was reported in financial services, transport and communication and personal consumer services. 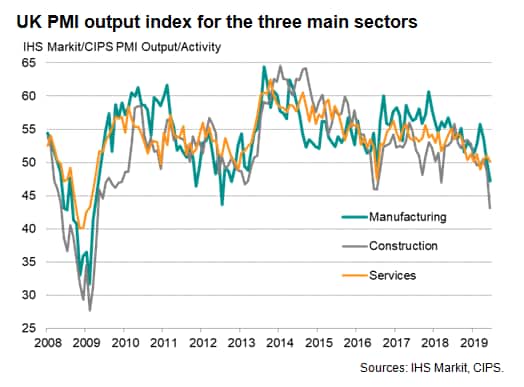 This time it's different

Importantly, the latest downturn differs from that seen in 2016 as it has followed a gradual weakening in the rate of economic growth rather than being a sudden and brief collapse in output after the 'shock' referendum result. The pace of growth has eased markedly since peaking a year ago, resulting in a steady deterioration in demand so far this year. Measured across the three sectors, inflows of new business fell in June for the fifth time so far this year, with the rate of decline gaining momentum to reach the second-steepest since April 2009. 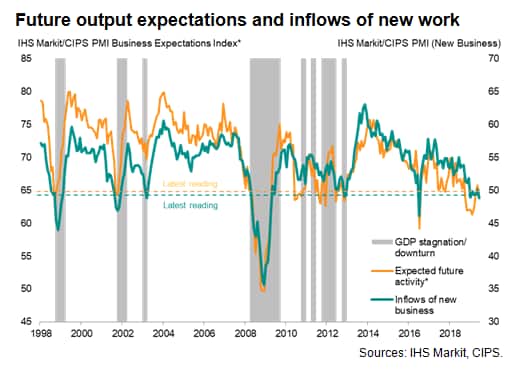 New orders fell in all three sectors, with construction registering the sharpest downturn followed by manufacturing, while services saw a marginal decline.

The lack of new work meant companies again ate into previously placed orders to sustain business activity. Measured across the second quarter, backlogs of work consequently fell to an extent not seen since 2012.

Average prices charged for goods and services meanwhile rose at the joint-weakest rate since July 2016 as firms increasingly sought to boost sales by competing on price. In contrast, average input costs rose sharply again, exerting downward pressure on profit margins, in part due to higher import costs arising from the depreciation of sterling, higher fuel prices and the recent rise in the minimum wage. 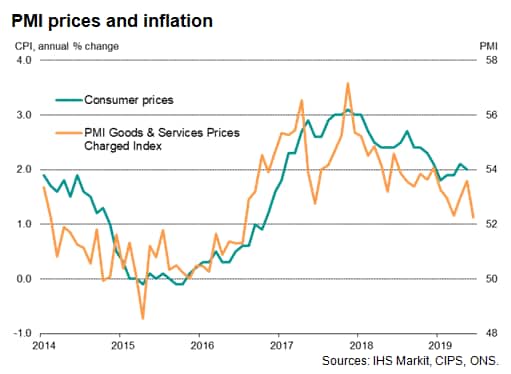 The main piece of good news from the survey related to employment, with jobs growth ticking higher during June to signal the largest rise in employee numbers since last September. However, only the service sector reported an increase in payroll numbers, with weak demand and cost cutting leading to job cuts in both manufacturing and construction. 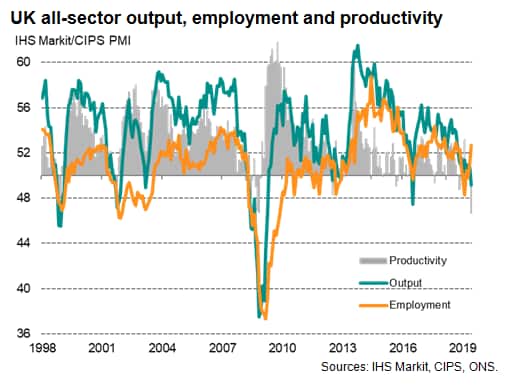 Moreover, the unusual boost to hiring at a time of falling output also indicates the sharpest deterioration of labour productivity recorded over more than 20 years of survey data.

The additional hiring is unusual given the downturn in order books, especially as businesses also grew less optimistic about the outlook (albeit less gloomy than earlier in the year), but nevertheless provides a ray of hope that the current downturn may prove transitory. Indeed, in manufacturing, at least some of the recent downturn has reflected an inventory adjustment after record levels of Brexit-related stock building seen earlier in the year.

However, the overall degree of business sentiment about the year ahead remains worryingly subdued, characterised by uncertainty over the potential disruption of Brexit, signs of weakening sales growth and a lowering of economic growth projections, suggesting risks remain skewed to the downside. 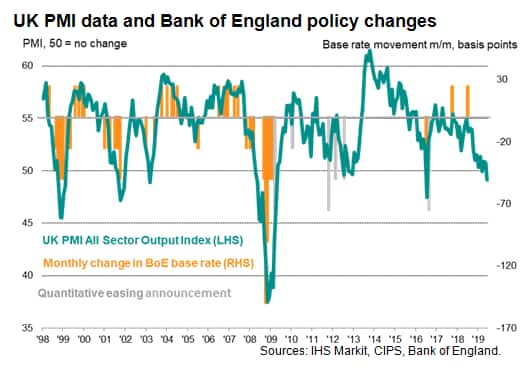 The June decline also pushes the PMI's headline index further into territory historically consistent with a bias towards looser monetary policy from the Bank of England, to the extent that for policymakers to not cut interest rates with the PMI at this level would be unprecedented in the survey's two-decade history.