UK business activity grew at the fastest rate for almost one-and-a-half years in February, with future expectations climbing to the highest for over four and a half years. Charges for goods and services also rose at an increased rate amid improved pricing power and rising costs. However, backlogs of work fell sharply and jobs growth remained muted, with companies also cautious in respect to investment spending. While Brexit worries have moderated since late last year, firms remain concerned by the uncertainty of future EU trade and some sectors have seen business hit by the coronavirus outbreak.

The IHS Markit/CIPS all-sector PMI output index - a GDP-weighted average of the manufacturing, construction and services surveys - rose from 52.8 in January to 53.0 in February, its highest since September 2018. The average PMI reading for the first quarter so far is the highest since the third quarter of 2018 and historically consistent with quarterly GDP growth of just over 0.2%, up from stagnation in the fourth quarter of last year. 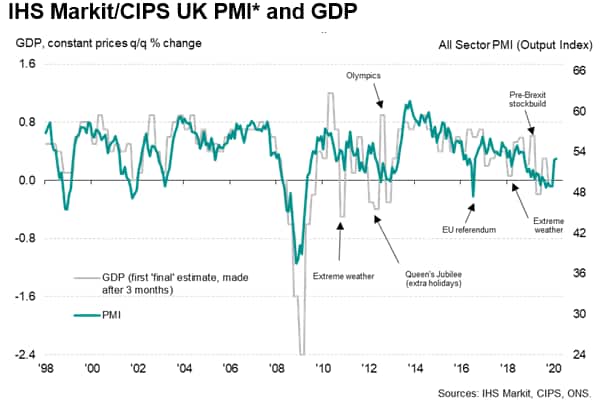 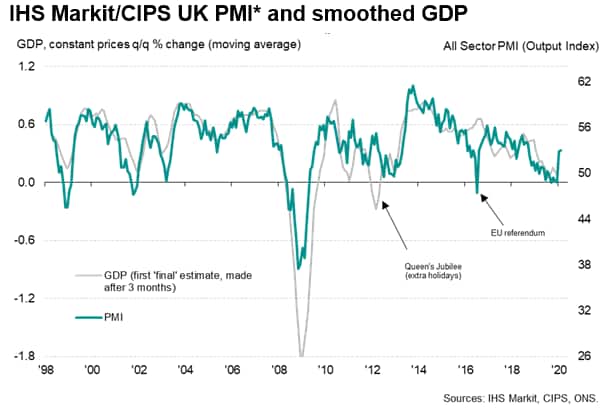 February saw manufacturing output grow at the fastest rate since last April and the construction sector also return to growth for the first time since last April, reflecting the largest gain in building activity since late-2018. However, it was the service sector that once again led the expansion, albeit losing some pace compared to January. The latest increase in service sector output was nevertheless the second largest since September 2018, led by business services providers and financial services companies. Consumer- and travel-facing services firms generally reported the weakest expansion, often linked to the coronavirus. 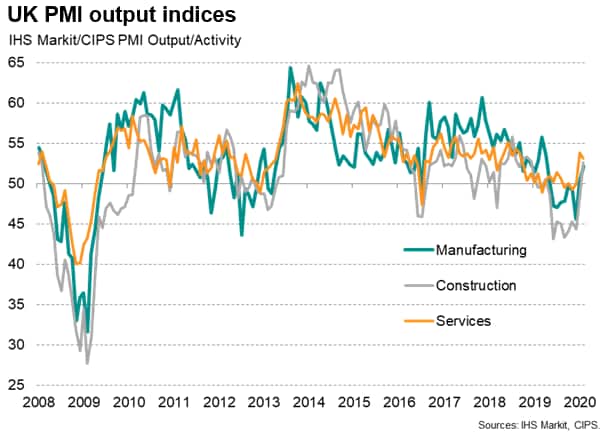 Alongside the rebound in growth so far this year, UK business have reported higher prices, with average rates charged for goods and services rising in February at the joint-steepest rate for almost two years. Modest increases in goods prices were accompanied by the largest jump in charges levied for services since November 2017.

Firms reporting improved pricing power amid the recent upturn in demand, but also often cited the need to pass increased costs on to customers to protect margins. 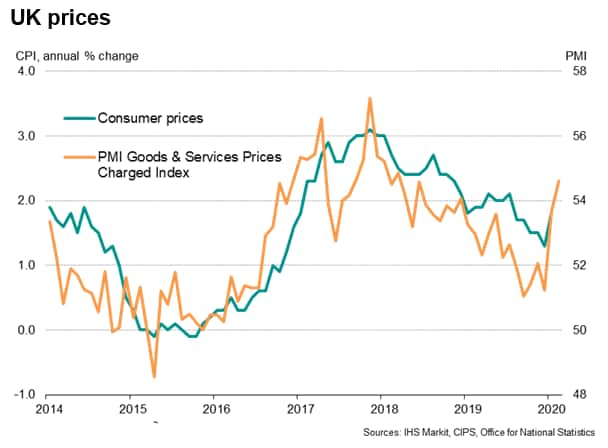 February also saw an upturn in optimism about prospects for the year ahead. Business sentiment regarding output in 12 months' time rose to the highest since June 2015 on average across the three sectors, having now risen continually from the low reached last August. Improved sentiment in manufacturing and services was offset, however, by a pull-back in expectations in the construction sector.

While late last year saw companies reporting disappointing sales and falling activity as political and economic uncertainty intensified ahead of the general election in December, the opening months of 2020 have seen improved confidence following the decisive election result, helping boost spending by businesses in particular. 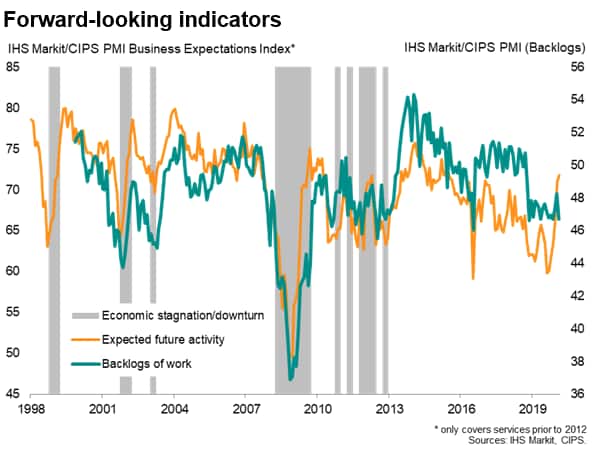 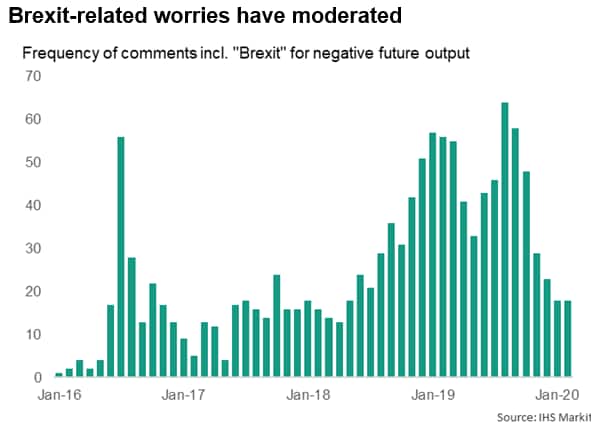 However, while Brexit-related worries have moderated significantly since late last year, Brexit uncertainty continues to dampen sentiment, with firms concerned about upcoming EU trade negotiations. Moreover, analysis of reasons cited by companies for changes in export orders indicates that Brexit-related factors continue to be seen as a cause of lost overseas business on balance. 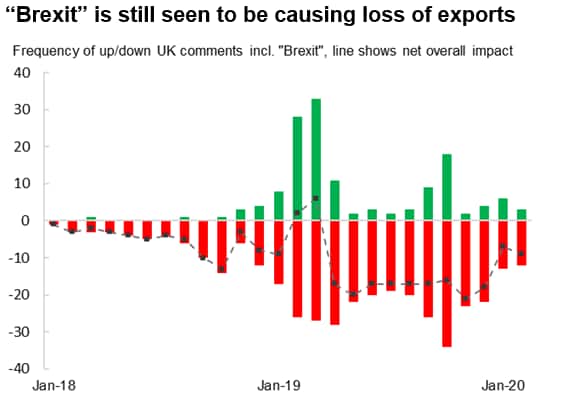 A key question will be the extent to which the coronavirus will impact the economy in coming months. In this respect, manufacturers reported the greatest lengthening of supplier lead-times since December 2017, largely as a result of virus-related supply chain disruptions, especially from China. The eight-point drop in the Suppliers' Delivery Times Index was the largest in the 28-year survey history. The lack of inputs led to the largest fall in inventories for just over seven years, hinting that future production could be constrained by supply shortages.

In the service sector, the coronavirus was meanwhile linked to reduced tourism numbers and weakening travel and transport business volumes, both in terms of consumer and business travel. Other sectors also saw incidences of the virus outbreak dampening sales, often due to reduced confidence and financial market volatility, or due to supply shortages limiting the ability to fulfil orders.

A further concern is that, although business expectations for the year ahead lifted higher, backlogs of work fell in February at a rate rarely exceeded over the past decade, hinting that output growth could weaken in the near-term unless inflows of new business rise at an increased rate in coming months. Backlogs fell in both manufacturing and services.

The fall in backlogs of work was accompanied by a reduction in hiring during the month, with employment growing only modestly as a result. Only the service sector reported a net increase in payroll numbers, with marginal falls seen in both manufacturing and services. While the survey data are broadly consistent with annual job creation in excess of 100,000, that's weak by standards seen in recent years and points to widespread caution in relation to hiring.

Such caution in relation to business expansion was also evident in business investment spending, with orders for plant and machinery continuing to fall in February despite a marginal rise in exports of such goods. 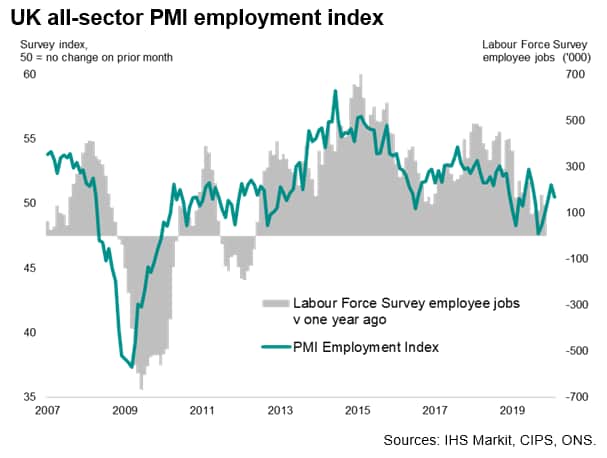 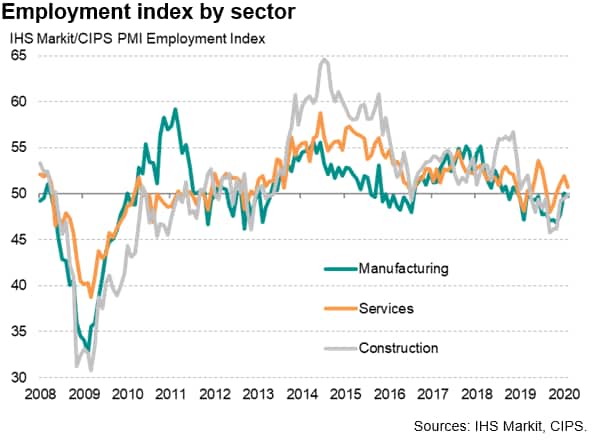 More stimulus on the cards

The recent rise in the all-sector PMI has lifted the survey from some of the lowest readings seen over the past decade late last year. But the PMI nevertheless remains in territory which would normally be associated with an easing bias at the Bank of England, albeit out of actual rate-cut territory. The growing risk posed by the coronavirus outbreak therefore suggests that further stimulus will be on the cards at the next MPC meeting if the March flash PMI numbers show a deterioration. 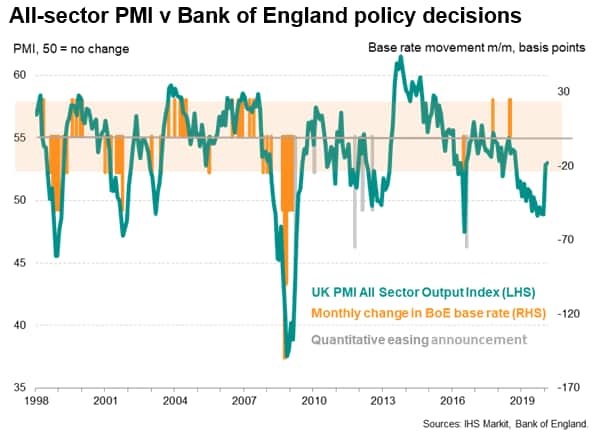