UK manufacturers reported the steepest deterioration of business conditions for over six years in June. Production and employment declined during the month amid an intensifying slump in demand and marked worsening of business sentiment.

PMI lowest for over six years

The IHS Markit/CIPS UK Manufacturing PMI® fell from 49.4 in May to 48.0 in June, dropping further below the 50.0 no change level to indicate a second successive monthly deterioration of business conditions. The rate of decline was the steepest since February 2013.

Output fell in June at a rate exceeded only twice1 since the height of the global financial crisis in early-2009. At its current level, the output index is consistent with the official measure of manufacturing production falling at a quarterly rate of 1%, or 4% annually. 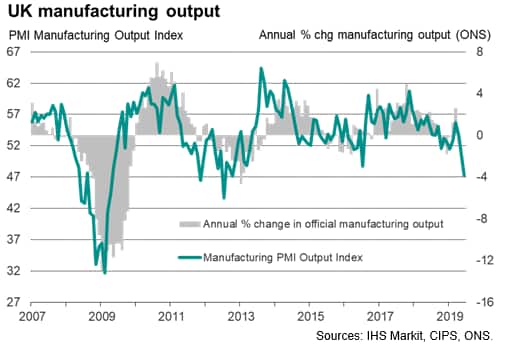 New orders meanwhile fell at an even faster rate than output, likewise showing one of the largest declines seen over the past decade, in part driven by a further marked drop in export orders.

Given the lack of new work, backlogs of work fell sharply as firms ate into previously placed orders to sustain production levels, suggesting that output could be cut further in coming months in the absence of a revival in new order inflows.

Some of the weakening in demand was linked to a reversal of the Brexit-related stock building that had been evident ahead of a feared no-deal Brexit on 31st March. Such destocking was illustrated by manufacturers' stocks of purchases falling for a second month in June, contrasting with the record inventory growth seen earlier in the year.

Stocks of finished goods, in contrast, continued to rise, but this was commonly linked to current production exceeding weaker than expected sales, which likewise augurs for lower output volumes in coming months. The forward-looking order-to-inventory ratio fell sharply in June, down to its lowest for seven years and the second-lowest since February 2009.

Companies consequently cut headcounts on average for the fifth time this year, albeit to a lesser extent than in the prior two months, concerned about the need to keep costs down in the face of falling order books and an unwanted build-up of unsold stock. 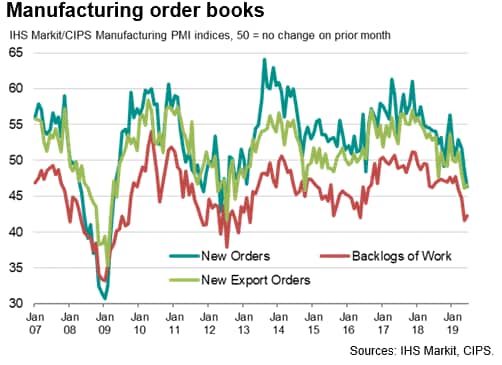 The trimming of headcounts also reflected growing concern about the outlook. Firms' expectations of future output growth sank sharply in June to the third-lowest seen since comparable data were first available in 2012.

Looking further into order book trends, rising demand for consumer goods contrasted with steep falls in orders for investment goods (such as business equipment and machinery) and intermediate goods (manufactured goods supplied as inputs to other firms). 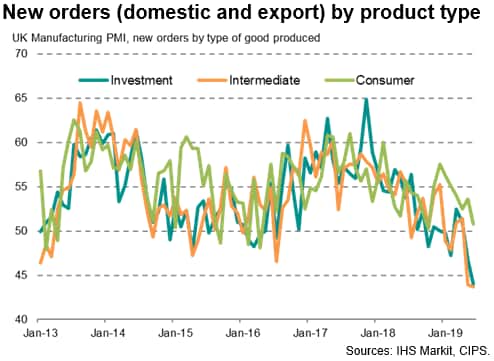 The increased rate of decline signalled by the June PMI looks likely to intensify further in July, given the worsening forward-looking indicators of business expectations and the order-to-inventory ratio. The anecdotal evidence from the survey reported an intensifying weakness of global demand, often linked to trade wars, which has been exacerbated by rising concerns over Brexit. A shift to destocking after the Brexit-related inventory build seen earlier in the year has also added temporarily to the slowdown, but so has a potentially longer-term structural shift in supply chain sourcing by EU companies away from the UK. The output index is based on companies reporting whether their production volume has risen, fallen or stayed the same at mid-month compared to the prior month. Being based of objective metrics rather than sentiment, the PMI indicators of output, new orders and employment provide an accurate guide to official manufacturing data.

The PMI also typically outperforms other surveys which are based on subjective measures such as whether production is above or below 'normal', or whether order books are 'satisfactory', not least because the definition of such subjective measures can change over time (read more in our special paper).

1 Steeper monthly declines were recorded in July 2012 and November 2011.