UK PMI data showed encouraging resilience amid renewed COVID-19 lockdown measures in November, suggesting the economy is set for a far smaller hit to GDP in the fourth quarter than seen earlier in the year. The lighter nature of the lockdown, supportive external demand, improved confidence and a temporary Brexit boost have all helped alleviate the economic pain of the lockdown.

The IHS Markit/CIPS PMI surveys showed service sector activity falling back into decline in November as a second lockdown to fight a resurgent wave of COVID-19 infections hit many businesses, especially consumer-facing firms in areas such as hospitality.

More encouragingly, manufacturing and construction output continued to rise, and growth even accelerated slightly in both cases compared to that seen in October.

Moreover, the decline seen in the service sector was far less severe than suffered earlier in the year, at the height of the lockdowns amid the first virus wave.

The overall situation was therefore one in which the upturns in manufacturing and construction almost entirely offset the downturn recorded in the services sector, resulting in only a modest overall drop in output. The all-sector IHS Markit/CIPS PMI output index, which is a GDP weighted composite of the indices from the three sectors, merely fell from 52.2 in October to 49.5 in November.

With any reading below 50 indicating contraction, the PMI still points to the UK economy having fallen into decline in November, but the impact of the lockdowns appears to have been far less severe than earlier in the year. Note that this index fell to 36.3 in March and slumped as low as 13.4 in April. 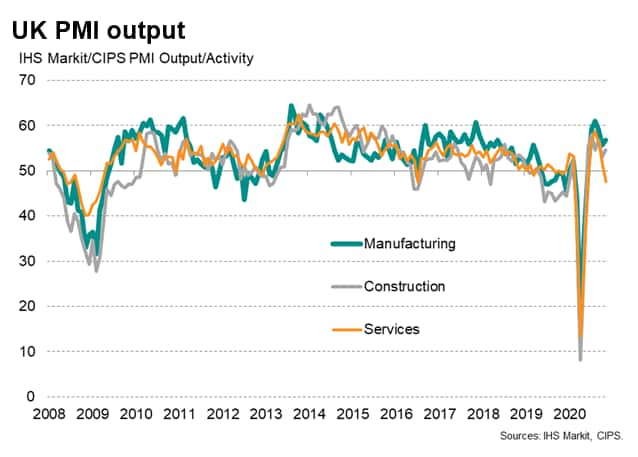 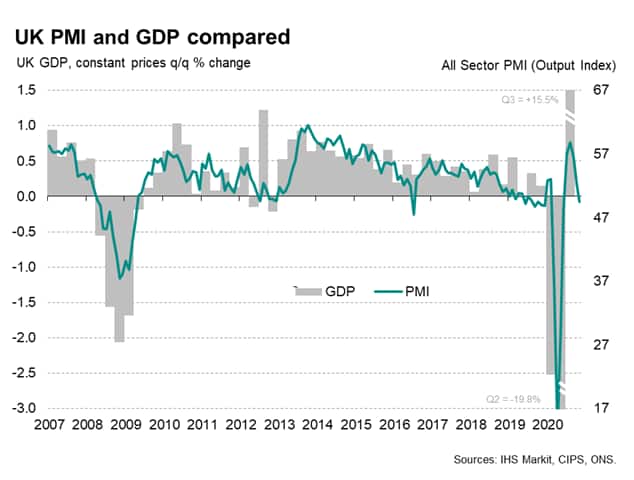 Some caution is warranted in interpreting what the PMI signals for GDP during lockdowns, not least because the PMI coverage excludes retail. GDP fell far more sharply than indicated by the PMI in the second quarter, and also rebounded more markedly than the PMI signalled in the third quarter. The PMI may therefore potentially once again understate the fall in GDP seen during the November lockdown to some degree. However, the relative resilience of the all-sector PMI in November provides a strong signal that GDP will decline by much less than earlier in the year.

There are various factors which have helped alleviate the impact of the pandemic on the UK economy in the fourth quarter.

First, the lockdown measures in the UK have been less severe than earlier in the year. IHS Markit's COVID-19 Containment Index rose from 41 in October to 67 in November, indicating a severe tightening of restrictions, but this compares with readings of 86 and 83 in April and May respectively during the first lockdown. 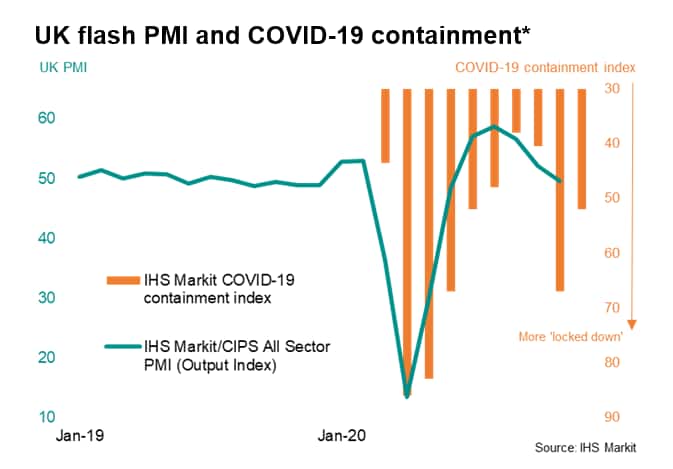 *COVID-19 containment index is based on information relating to issues such as closures of schools, non-essential shops and restaurants, as well as restrictions on public gatherings, internal mobility and external borders. We also forecast how these are expected to change in coming months, based primarily on government announcements. A reading of 100 means severe restrictions while a reading of zero indicate no restrictions.

Second, the UK's external environment has been stronger than earlier in the year. Economies such as the US and China have seen sustained strong - and even accelerating - growth in November. 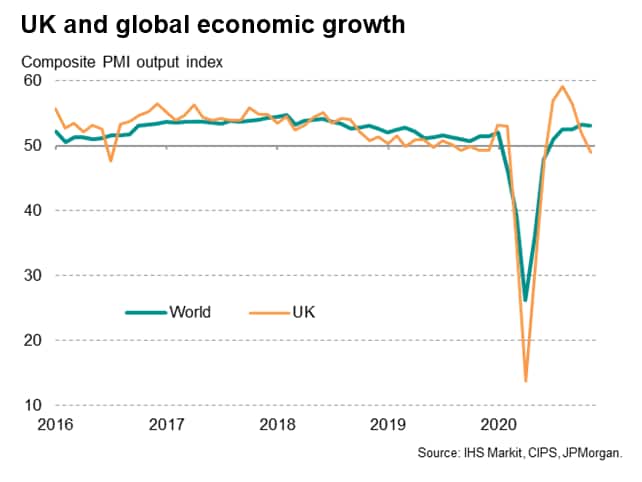 Third, business conditions were supported in December by improved sentiment about the year ahead. Earlier in the year, at the start of the pandemic, the lack of a light at the end of the tunnel meant companies focused on belt tightening amid widespread risk aversion. Business confidence about prospects for the year ahead slumped in March to the lowest in the PMI survey's history. In November, in contrast, encouraging news on vaccine developments in particular helped propel sentiment to its highest since March 2015, signalling a shift to greater risk appetite. 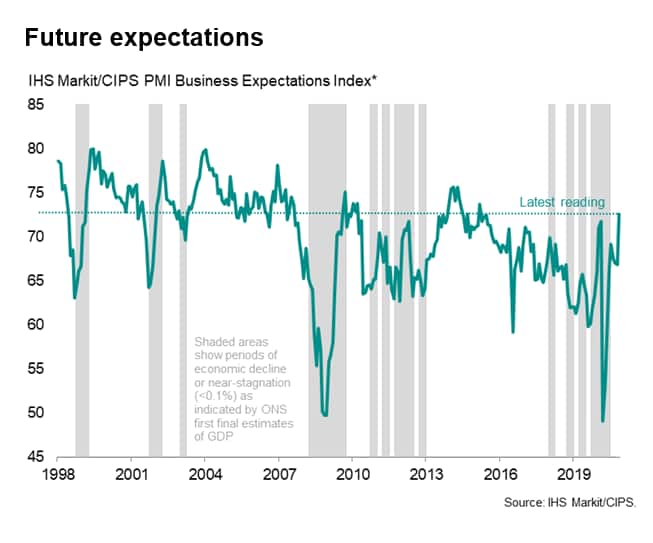 A fourth factor is likely to be more temporary. With the UK's departure from the EU at the end of the transition period on 31st December, companies reported a surge in demand from foreign customers - especially in the EU - ahead of Brexit.

The reported net boost to manufacturing orders and exports (as measured by the reasons cited by companies for rising demand) exceeded that seen ahead of prior Brexit 'deadlines' by a substantial margin. This positive boost to orders will fade, and in fact likely reverse, in the New Year, based on what we have seen during previous bouts of such pre-Brexit ordering. 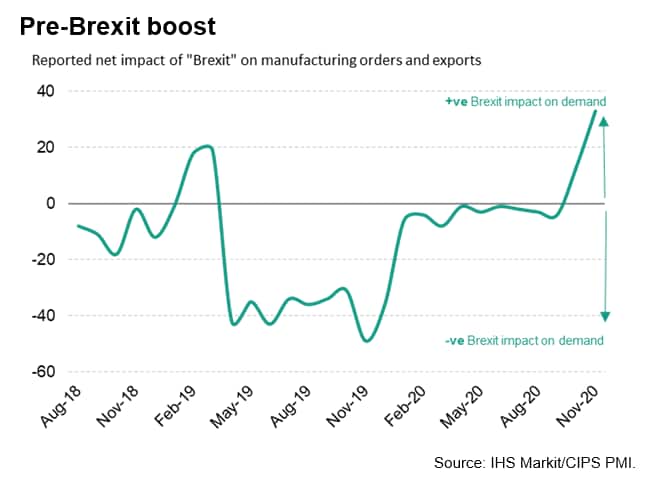 Analysis of reasons cited for either optimism or pessimism in the coming year clearly shows that 'Brexit' is widely cited as the key threat to businesses, especially in the manufacturing sector. Hopes of a successful vaccine form the principal basis for optimism. 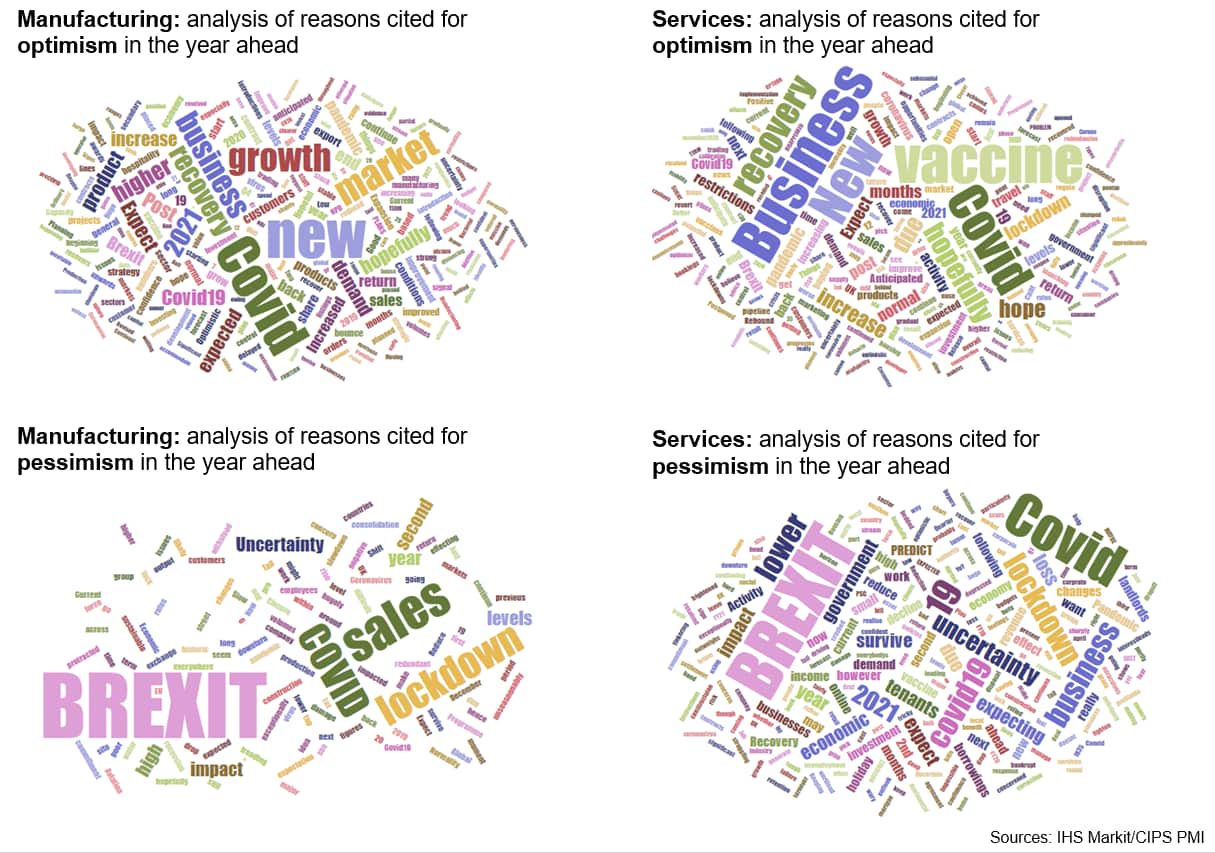