The latest official data showed the UK job market remained encouragingly buoyant in February, with a combination of rising employment and falling unemployment pushing pay up at one of the fastest rates seen since the global financial crisis over ten years ago.

However, forward-looking survey data suggest that demand for staff has cooled, which will likely feed through to weaker jobs growth and easing pay pressures in coming months. Much will of course depend on Brexit and whether businesses will continue to hire in the face of ongoing uncertainty about the timing and details of the UK's departure from the EU. 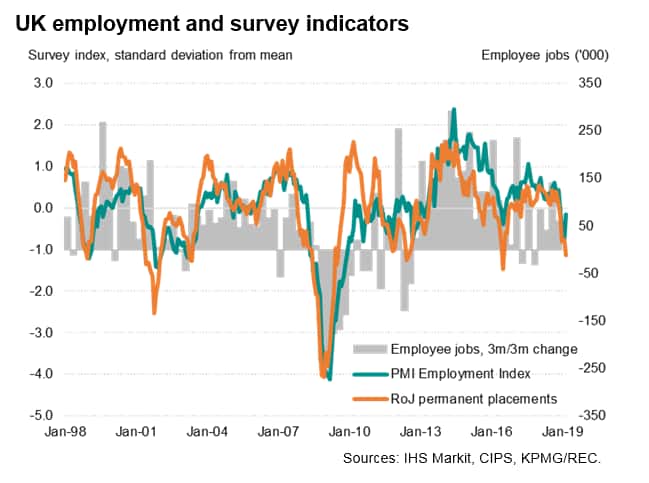 The number of people in employment rose by a robust 179,000 in the three months to February, signalling further solid demand for staff in the opening months of the year. The unemployment rate meanwhile held at a 44-year low of 3.9%, according to the latest data from the Office for National Statistics, with the number of unemployed down by 27,000 to 1.343 million.

The number of job vacancies per unemployed person is running at less than 1.6, its lowest since comparable data were first available in 2001, underscoring the tightness of the job market. In this environment, pay pressures firmed, with total employee pay rising 3.5% in the three months to February. The rise in total pay was the joint-largest seen for over a decade, though remains below the rates typically seen at times of labour market tightness before the financial crisis. 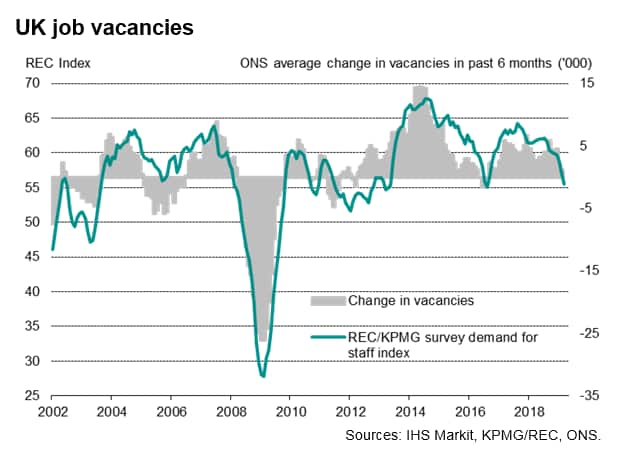 On closer inspection, some cracks have appeared in the data, hinting at a softening of the job market. The number of vacancies fell for a second successive month, suggesting some cooling of hiring. Pay growth also eased in February alone, with total pay rising by 3.2% and regular pay up just 3.1% on a year ago, down from 3.9% and 3.7% respectively in January. 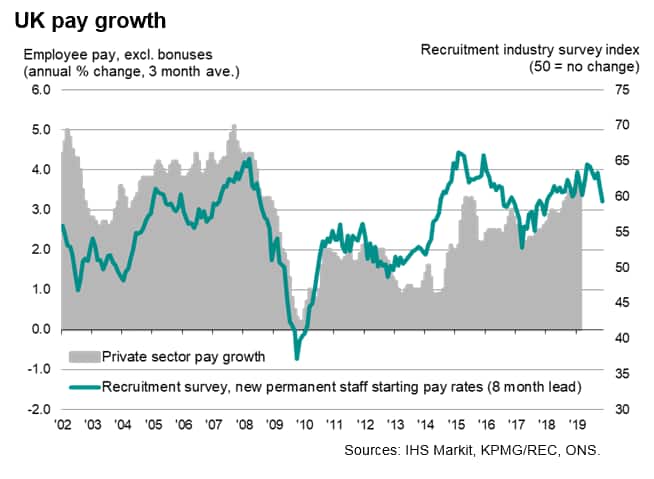 Recent survey data have also turned sour, suggesting the official data may deteriorate in coming months. The PMI surveys indicated an overall fall in payroll numbers during the first two months of the year and only a marginal rise was seen in March, the latter in part buoyed by firms taking on temporary staff to help with pre-Brexit preparations. Similarly, recruitment agencies in the REC/KPMG monthly survey have reported a deterioration in the number of people placed in permanent jobs so far this year, linked in many cases to growing anxiety over Brexit. Placements dropped in March at the steepest rate since the EU referendum in 2016 and overall demand for staff was reported to have risen at one of the slowest rates seen over the past six years.

Recruitment agencies also reported that pay growth for new starters in jobs dropped sharply to a two-year low in March, which should translate into softer official regular private sector pay growth in coming months, albeit still indicating an annual rate of increase of around 3% and well ahead of consumer price inflation, which is currently running at 1.9%. Rising real pay should therefore continue to help support consumer spending in coming months, but the effect is likely to fade unless pay growth revives again. 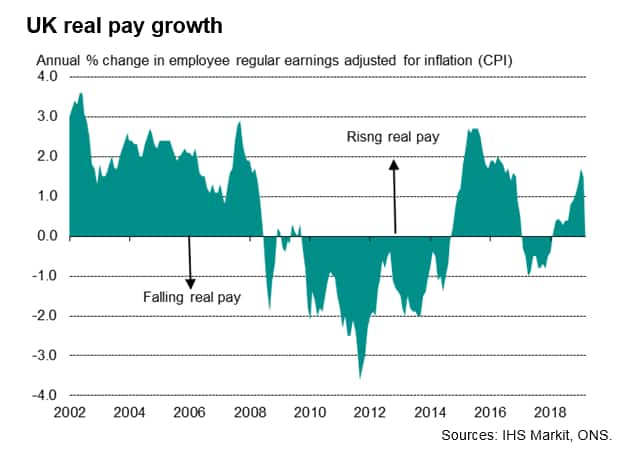