Differences in survey methodology can cause major differences in signals, which should always be borne in mind when analysing business survey data. The precise questionnaire wording is particularly important, as illustrated by two surveys of UK manufacturing.

The Confederation of British Industry and IHS Markit/CIPS both publish monthly surveys of manufacturing business conditions, but often diverge in terms of the signals being sent in respect to the trends in output and new orders.

In mid-2018, for example, the CBI survey was indicating one of the fastest periods of manufacturing output growth since 2013, whereas the PMI had slipped into territory indicative of production almost stalling. While the CBI survey continued to indicate solid output growth in the second half of 2018, the PMI remained weak, consistent with falling output in the fourth quarter. In this instance, the PMI proved to have been the more reliable indicator, with official (Office for National Statistics) manufacturing output data showing falling output in the three months to December. 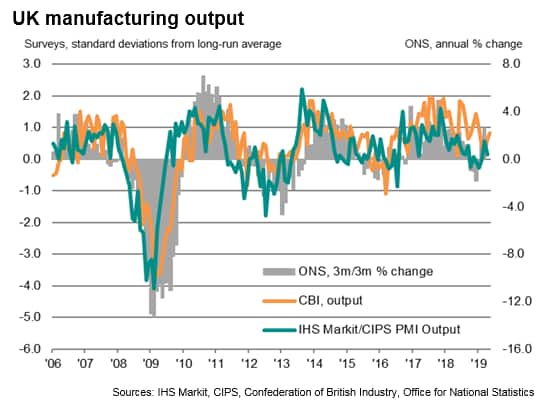 The CBI's order book index was more useful in accurately anticipating the late-2018 downturn, though see-sawed between contraction and growth territory to muddy the picture. By contrast, the downward trend in the PMI was more steady and clear-cut. Moreover, the PMI index turned down earlier than the CBI, having assumed a general downward trend since late-2017. The PMI gauge slipped into contraction in October 2018 to register the worst order book performance since the EU referendum.

Since then, as of May 2019, the CBI's gauge of new orders has now also slipped to its lowest since the EU referendum, though this merely represents catch-up compared to the PMI (data up to April). 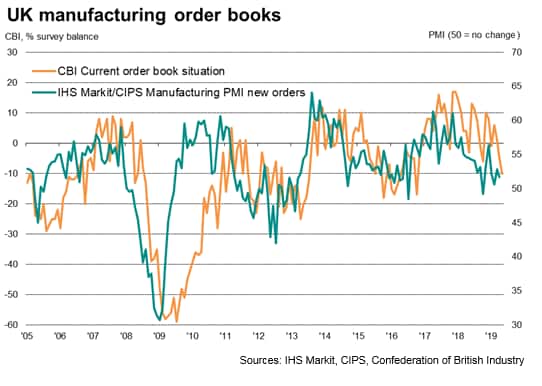 To understand why the surveys diverged in late-2018, and why they have now come into line, we need to look at the questions asked.

In short, the CBI survey looks at levels relative to a benchmark of 'normal', while the PMI measures the monthly change, or flow. Flows will tend to change first.

The CBI survey asks companies if their order book is normal, above normal or below normal. In contrast, the PMI asks if the volume of new orders has risen, fallen or stayed unchanged on the prior month. Clearly there are instances where inflows of new orders could have fallen for several months but the overall level of orders has remained above normal, and vice versa. In such instances, the PMI will turn before the CBI survey.

The leading indicator properties of the PMI can be seen visually when charted against the CBI survey but is further illustrated by simple correlations. We look at the period 1992 (when the PMI commenced) and the end of 2018, comparing the two survey indices in raw monthly format and smoothed three-month averages. 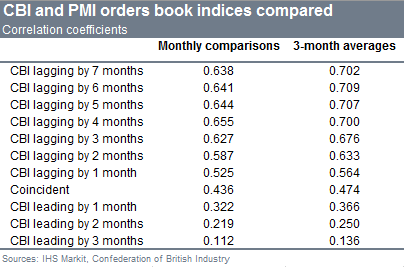 Subjectivity an issue for time series

Subjectivity can create further problems when looking at survey time series data in terms of how benchmarks such as 'normal', 'favourable' or 'satisfactory' are used.

The PMI is designed to avoid any subjectivity in the questions (with the obvious exception of the expected future output question). A comparison of whether new orders received are higher, the same or lower than one ago is based on objective business metrics and no opinion should be involved when responding.

To illustrate, we look at average values of the CBI and PMI survey questions before and after the global financial crisis, and compare against the average rate of growth of manufacturing output as given by the ONS.

In the years leading up to the crisis, the CBI survey net balance averaged -15 compared to -5 in the nine years following the crisis, indicating a major shift in a positive direction since the crisis. One would therefore have expected actual output growth to have been far higher since the financial crisis than before. However, annual output growth has in fact only risen from an average of 0.9% before the crisis to 1.2% since the crisis. This corresponds with the theory about adjusting to a new lower 'normal': there have typically been fewer negative respondents since the crisis because the new vision of what is 'normal' has been set lower.

The PMI survey index, in contrast, has recorded only marginally stronger growth since the financial crisis, corresponding more closely with the actual output data.

In other words, only the subjective CBI survey index has seen a structural shift since the financial crisis, which is in fact visible when the CBI and PMI surveys are charted historically. 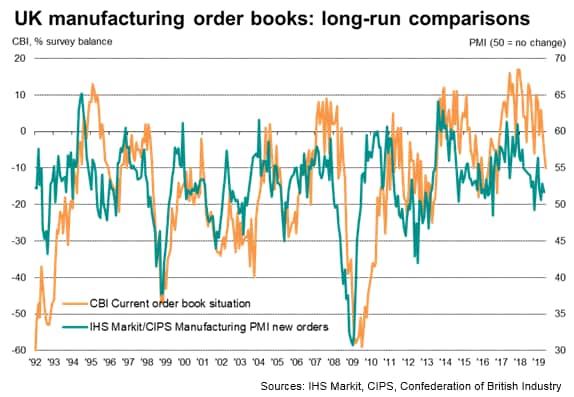 It is possible that the post-EU referendum may also have seen a further structural break in sentiment-based survey time series, with the new 'normal' set even lower than in the immediate post-financial crisis years, which is something that should be borne in mind when analysing CBI data. Such a shift should not be evident in the PMI new orders index. This theory is give some weight by a comparison of the objective PMI new orders measure with the subjective PMI question on future output expectations. The data suggest that future expectations have run lower relative to actual new order growth after the referendum. Further work is required to explore this possibility and its implications.