UK manufacturers reported the weakest improvement in business conditions for nearly one-and-a-half years in April, and forward-looking indicators suggest growth could wane further in May.

The IHS Markit/CIPS Manufacturing PMI fell from 54.9 in March (revised down from 55.1 due to new seasonal adjustment factors) to 53.9 in April. The latest reading was the lowest since November 2016, the PMI having fallen steadily since last November's peak of 58.3. 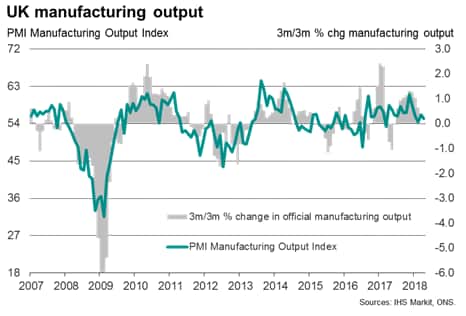 While adverse weather is likely to have subdued manufacturing activity in February and March, the ongoing weakness signalled by the April PMI survey adds to evidence that the goods-producing sector is struggling amid a broader European slowdown (as indicated by recent eurozone PMI surveys), as well as weakened business optimism and heightened uncertainty about the outlook.

All five component indices of the PMI contributed to its fall. April saw weaker output, new order and employment growth, as well as a renewed decline in inventories of inputs alongside reduced pressure on supply chains.

April's output growth was the second-weakest in over a year, signalling a poor start to the second quarter in terms of manufacturing's contribution to GDP. The PMI output index correlates well with official manufacturing output data (see chart), and regression analysis suggests that the latest reading is indicative of a modest quarterly growth rate of just 0.4%.

The slowdown in production corresponded with weaker inflows of new orders, which was in turn linked in part to a deterioration in export order book growth. New export orders showed the smallest rise since June of last year. 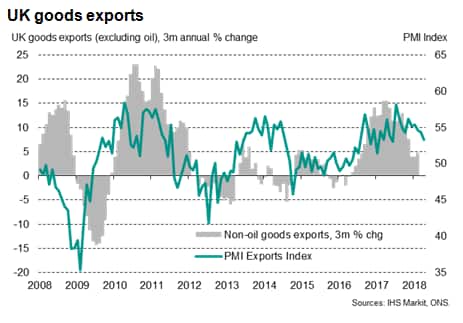 Producers of consumer goods reported the sharpest slowdown in order book growth, while the strongest gain was reported in the investment goods sector, which is dominated by manufactures of plant and machinery.

Inventories of finished goods rose for a second straight month and backlogs of orders fell for a fourth month; both series consequently pointing to the existence of few capacity constraints in the factory sector.

Supply chain delays likewise eased, though delivery times continued to lengthen on average as manufacturers reported slower growth in purchases of inputs compared to prior months.

One of the most disappointing signals from the April survey came in the form of a marked slowdown in hiring. Employment grew at the slowest rate since February of last year, with a particularly notable weakening of hiring evident among larger firms and those operating on the consumer goods sector. 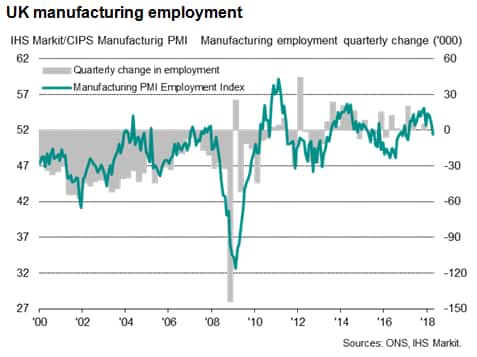 Comparisons of the survey's employment index with official employment numbers suggest the PMI is indicative of manufacturing headcounts stagnating at best in April. Job losses were primarily associated with cost-cutting and restructuring, as well as the relocation of production to other countries.

The slowdown was accompanied by weaker price pressures. While higher oil prices may lead to renewed upward pressure on manufacturing costs in coming months, the survey evidence suggests that some of the pressure from supply shortages has eased since the intensity seen late last year.

Input costs grew at the slowest rate since last July, albeit still rising at a historically strong rate, linked in part to higher commodity prices (notably metals) and the ongoing feed-through of the weaker pound.

Average output prices also rose markedly again, though the rate of inflation likewise cooled, down to the lowest since last August, and well below January's recent peak. 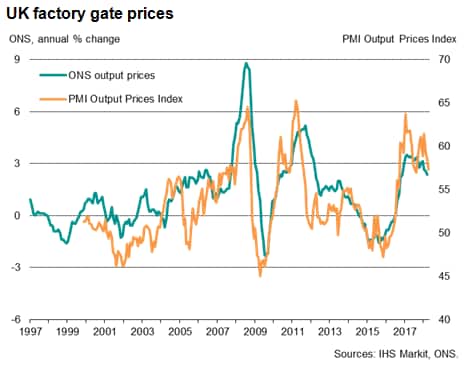 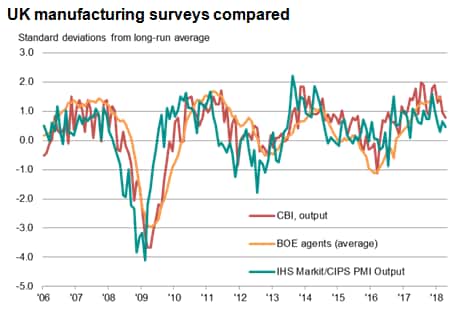