The IHS Markit/CIPS Manufacturing PMI fell sharply in October, down from 53.6 in September to 51.1, its lowest since 2016's EU referendum. Output growth also weakened to the slowest since July 2016 in response to the first deterioration in order books since the Brexit vote. 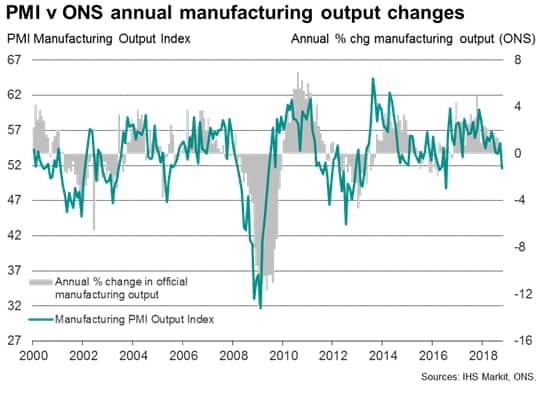 Although only marginal, the drop in new orders was notable in being only the second such decline since early-2013. Export orders fell for the second time in the past three months, indicating a marked turnaround following robust growth earlier in the year. 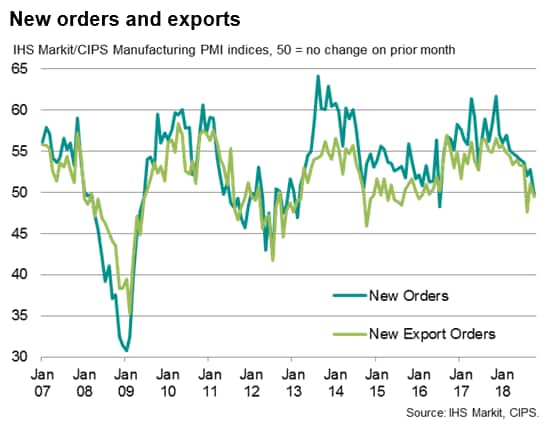 Other survey indicators added to the gloomier picture. Business optimism about the year ahead slipped lower amid increased Brexit-related uncertainties and rising global trade worries. Employment and goods bought for use in production meanwhile fell for the first time since July 2016, with companies throttling production as backlogs of uncompleted work fell.

The incidence of supply chain delays meanwhile was the lowest in six months as reduced demand for inputs took pressure off suppliers. Cooling demand for inputs and pull-backs in some global commodity prices helped push input cost inflation to the weakest since June 2016.

The fall in overall order books was centred on investment goods in October. While responses typically indicated that the downturn reflected reduced capital spending and delayed investment decisions by customers, this sector also includes autos producers, who have struggled to meet new emission standards in recent months, hindering sales and production. 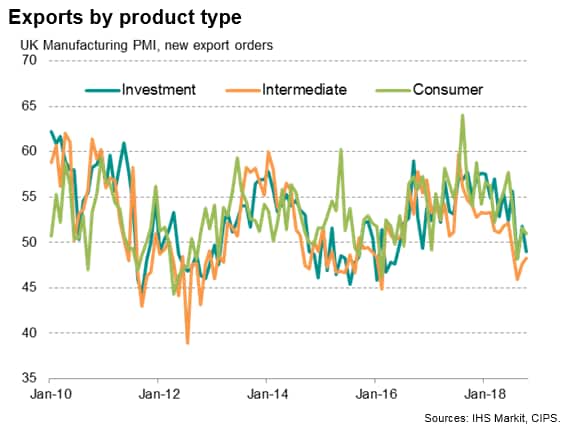 However, in a sign that the slowdown has become increasingly broad-based, October also saw near-stagnant order books for both consumer goods and intermediate goods. The latter, which comprises producers of parts for other manufacturers, saw the worst trade performance of the three broad sectors, with exports down for a fourth successive month. The steepness of the decline in demand for intermediate goods reportedly reflected a combination of destocking by foreign customers and a shift in purchasing to non-UK suppliers.

A comparison of the survey's output index with official manufacturing data from the Office for National Statistics indicates that the October survey is indicative of the official gauge of output falling into contraction, dropping by 0.2% when measured on a three-month-on-three-month basis*.

An advantage of the PMI is that the survey provides an advance guide to underlying trends in official data. This helps to identify occasions when the official gauge has been distorted by factors such as a major production change in a concentrated number of companies (such as autos). 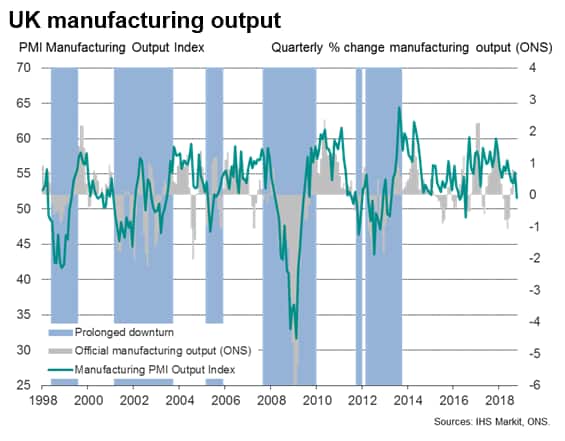 All other occasions proved to be brief downturns that were soon reversed. Using the PMI survey data to analyse these periods of decline, sustained downturns have in fact only ever been recorded when the PMI's Output Index has fallen below 50.0 for more than one month. All other occasions have proven to be brief contractions in official data. At 51.6, the October output index remained above 50.0, but has clearly moved towards levels commensurate with a potentially significant downturn.

*A three-month on three-month comparison of the ONS data is used because monthly official data are volatile, making comparison extremely difficult. See chart below, which also includes a moving average of the ONS to highlight the extent to which the PMI accurately describes the underlying trend in the official series. 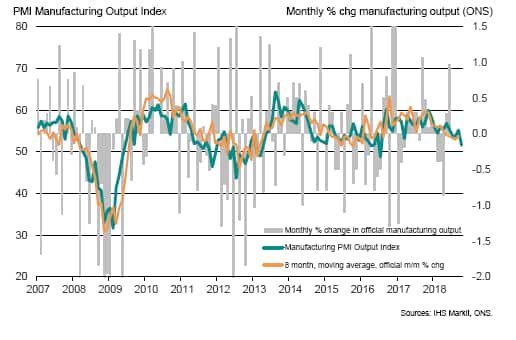