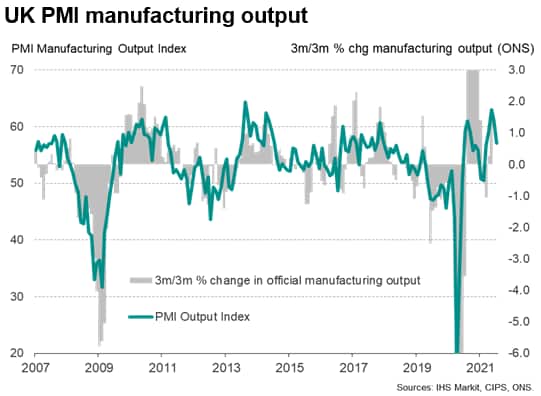 The IHS Markit/CIPS manufacturing PMI's output index, which measures month-on-month changes in production volumes, fell from 61.1 to 57.1 between June and July, according to the provisional 'flash' data. With the index above 50, the survey continued to signal expansion, but the decline in the index indicated the weakest production growth since March.

Analysis of the replies provided by those manufacturers reporting lower production volumes in July highlights a growing impact of COVID-19 and staff shortages, though material shortages remain the most common cause of lost output.

Of those giving a reason for falling production, one-in-three (34%) attributed the decline to a shortage of raw materials and components, which in turn were blamed on a combination of the pandemic and Brexit-related supply disruptions. As a proportion that was down from 44% in June, though the actual number of companies reporting shortages was only marginally lower.

The survey also showed that supply delays continued to develop at a pace rarely witnessed over almost 30 years of survey history, according to the suppliers' delivery times index - an important barometer of capacity constraints and inflationary pressures. 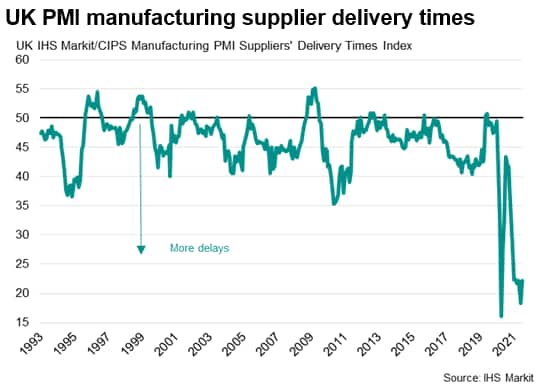 An additional 14% reported that production was curbed by a lack of staff, in many cases also attributed to COVID-19, with employees either ill with the virus or unavailable to work due to isolation rules, though others simply noted difficulties filling vacancies.

At the same time the proportion blaming lost output on COVID-19 in general jumped from 7% in June to 16% in July, with companies often citing the rise in infection numbers associated with the Delta variant. 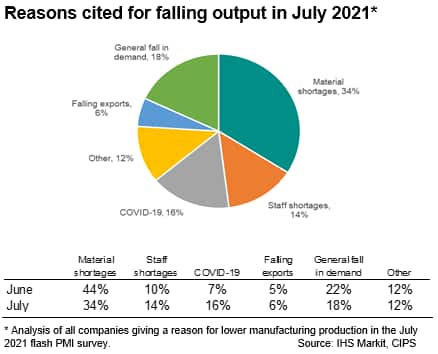