The UK manufacturing sector saw an increase in price pressures at the end of 2020, coinciding with a marked tightening in local and global supply chains and a temporary pre-Brexit surge in demand. As a result, the IHS Markit/CIPS Manufacturing PMI indicated the fastest the rise in input prices for two-and-a-half years.

In line with a global trend of sharper cost inflation, the UK Manufacturing PMI Input Prices Index indicated the steepest rise in input costs since June 2018 in December. Surveyed businesses attributed this to a host of factors, including raw material shortages, higher logistics costs and increased demand for inputs.

Shortages of raw materials and logistical issues were reflected in a steep lengthening of suppliers' delivery times in December. Barring those seen in April and May 2020, during the first wave of the coronavirus disease 2019 (COVID-19) pandemic, the latest deterioration in supplier performance was the steepest observed in the PMI's 29-year series history. 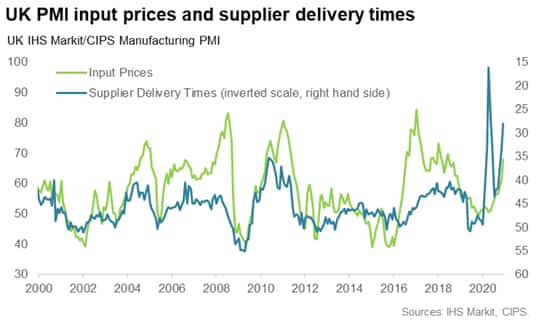 Companies often reported that goods transported from abroad took considerably longer to arrive, in part due to a lack of shipping containers after freight travel was disrupted by the pandemic in the first half of 2020, notably from China. Consequently, shipping costs have soared, with some reports suggesting a fourfold rise in freight rates from November.

With shipping capacity at a premium, input cost inflation was noticeably quicker among firms requiring bulkier items. In fact, makers of intermediate and investment goods saw the sharpest rises in input prices since the first half of 2018. Consumer goods firms meanwhile saw a slower but still marked uptick. 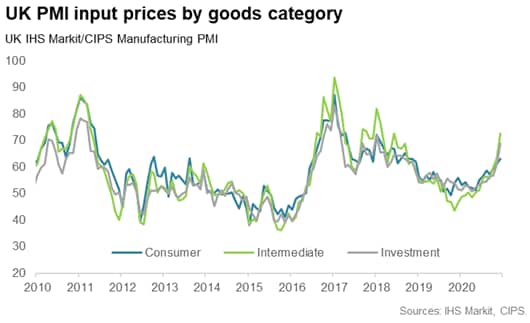 In addition to problems at the point of origin, manufacturers reported a slowdown at the domestic end of the supply chain during December, as Brexit stockpiling, COVID-19 measures and off-sick staff meant that UK ports often had to cope with high volumes but lower than usual workforces. Cargo thus took longer to unload, while dock workers also had to deal with large volumes of empty containers that had piled up during the global lockdown.

As a result, our survey panel showed that around 13% of companies experienced congestion at domestic ports, up from 6% in the previous month. 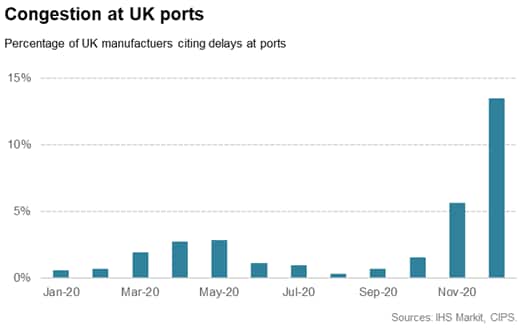 While the UK faced supply constraints from the pandemic, there was also additional input demand pressure in December as more companies stockpiled ahead of the Brexit deadline. The latest survey indicated that roughly 22% of manufacturers increased their inventories due to Brexit, the highest since March 2019.

Moreover, firms saw a marked rise in new export orders from European clients, with approximately 16% of the survey panel citing an increase due to the expected change in trade rules from January. As such, the additional demand for outbound transport meant that local supply chains faced strong traffic in both directions, thus compounding the impact on logistics costs. 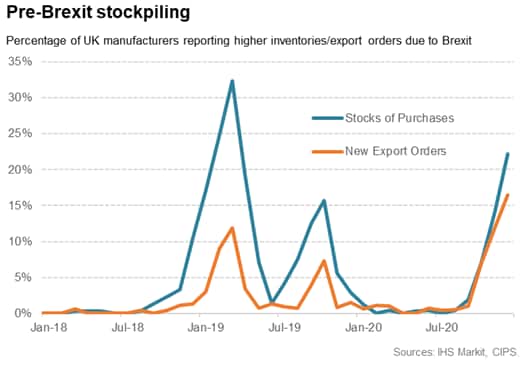 Since the new trade deal has come into effect, reports suggest that ports and borders have seen an easing of traffic, although some hauliers have noted delays away from ports as they accustom to new regulations.

UK manufacturers responded to the sharp rise in input costs in December by raising output prices at the quickest rate since February 2019. Moreover, January data could reveal another strong increase in factory gate charges, as some firms tend to see a lag between cost pressures and pricing decisions. 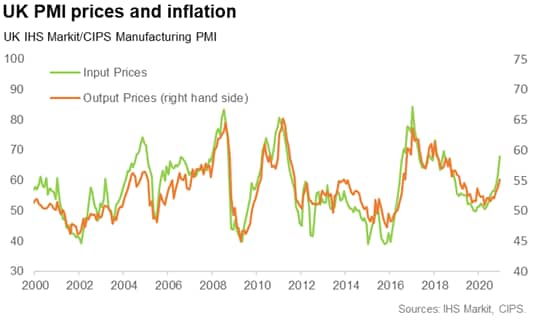 As a result, consumers are likely to face higher prices in the first quarter of 2021, particularly as many companies will look to protect their margins after a devastating year for revenues in 2020. The new national lockdown could meanwhile hamper supply chains and drive up material costs further, although a softening in post-Brexit demand should help to ease inflationary pressures, as will low prices for many consumer-oriented services.