The latest GDP data add to signs that the UK economy stagnated at best in the fourth quarter of last year as heightened political uncertainty, Brexit risks and weaker global demand all colluded to dampen spending by both business and households. The good news is that all these headwinds are showing signs of moderating, if not even turning into tail winds, as we move into 2020. However, downside risks remain elevated.

Official data from the Office for National Statistics showed the economy contracting 0.3% in November, worse than the unchanged picture expected by economists, but broadly in line with the trend signalled by recent survey data.

Manufacturing led the decline, with output dropping 1.7%, but the vast service sector also contracted, with output falling 0.3%. The construction sector surprised to the upside, with a 1.9% surge in output, though data for this part of the economy are subject both marked volatility and revisions, suggesting this upturn be taken with a pinch of salt.

The November downturn leaves the economy growing by a subdued 0.1% in the three months to November, with upward revisions to prior months having helped offset the latest decline. However, output in the latest three months is just 0.9% higher than a year ago, which is the worst performance since 2012. Moreover, so far the GDP data for the fourth quarter are running very marginally below the third quarter, in line with the indication from the IHS Markit/CIPS PMI survey data. Output needs to rise by at least 0.1% in December to avoid the economy contracting (barring any revisions to back data), but the PMI hints at ongoing malaise at the end of the year. 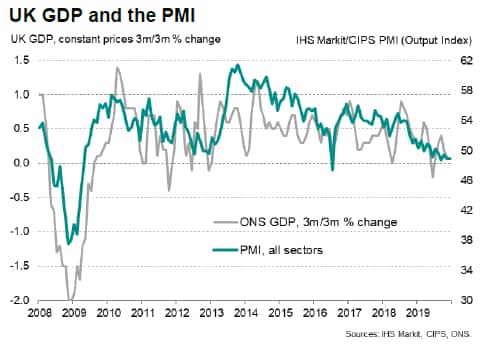 More encouragingly, survey evidence suggests growth may being to pick up in coming months. Although the survey data collected in December showed business activity remaining broadly stagnant, sentiment regarding future output rose sharply, especially after the general election. The headline all-sector PMI continued to run at one of its lowest levels seen over the past decade, stuck just below the 50.0 no-change level for a fifth month running at 48.9 in December, but the output expectations index jumped to its highest for over a year. A similar improvement in confidence was seen in the Deloitte CFO survey. 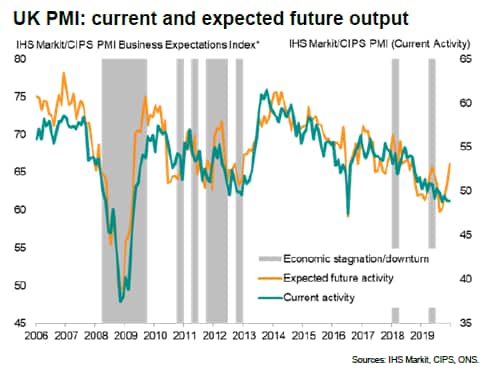 The rise in sentiment suggests that increased political clarity, notably in relation to Brexit, has boosted business confidence regarding investment and spending, and could drive growth higher in coming months. The prospect of increased government spending has also brightened the outlook. At the same time, global economic growth has shown signs of picking up, meaning external demand should act as less of a drag on the UK as we head into 2020. The worldwide PMI surveys registered the fastest pace of output growth for eight months in December, buoyed in part by manufacturing stabilising after an easing of trade tensions.

Threats to the outlook remain elevated, however, notably including uncertainty over future trading arrangements with the EU. There's also a distinct possibility that trade wars could continue to hit growth, especially if the US focus shifts from China to Europe. Oil prices could also rise amid current geopolitical risks, squeezing household budgets and raising costs.

In the near term, we will know more about how the UK economy started 2020 with the release of the January flash PMIs on 24th January, which are likely to provide an important steer to policymakers. Recent Bank of England rhetoric has highlighted how any failure of the survey data to show the improvement in confidence feeding though to faster economic growth is likely to lead to a swift cut in interest rates. 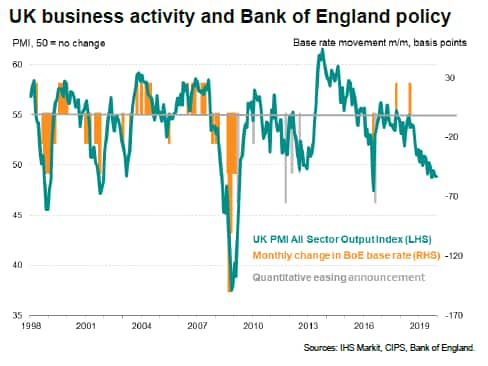