UK leads global upturn, but only the US and China build capacity for future output growth

The worldwide PMI surveys indicated a further strengthening of global economic growth in August as countries continued to recover from coronavirus disease 2019 (COVID-19) lockdowns, with the JPMorgan Global PMI hitting a near one-and-a-half year high of 52.4, but different countries showed varying degrees of resilience in terms of their economies rebounding. Of concern, countries seeing the sharpest escalation of COVID-19 infections saw renewed downturns in business activity, and employment trends have worsened in some countries despite stronger output growth.

The strongest expansion among the largest developed and emerging markets in August was recorded in the United Kingdom, where the composite PMI hit a six-year high of 59.1 as growth accelerated in both manufacturing and service sectors. Service sector growth was the sharpest since April 2015, while factory production showed the largest gain since May 2014.

Russia saw the second-fastest rate of growth, with a composite PMI reading of 57.3 indicating the quickest monthly increase in activity since January 2017. The upturn was led by an especially strong service sector performance, though manufacturers also reported faster production growth.

Growth meanwhile accelerated again in China after having lost a little momentum in July, with the composite Caixin PMI output index climbing to 55.1. Although below June's recent peak, the latest reading indicated the second-fastest expansion seen over the past decade and the fourth successive monthly improvement. Only the UK and Russia saw faster rates of expansion. With China having locked down its economy earlier to contain the virus, and reopening earlier, the sustained expansion is encouraging for other countries. However, although manufacturing output growth accelerated to the fastest since early 2011, in part linked to renewed export sales, the service sector lost momentum for a second successive month. 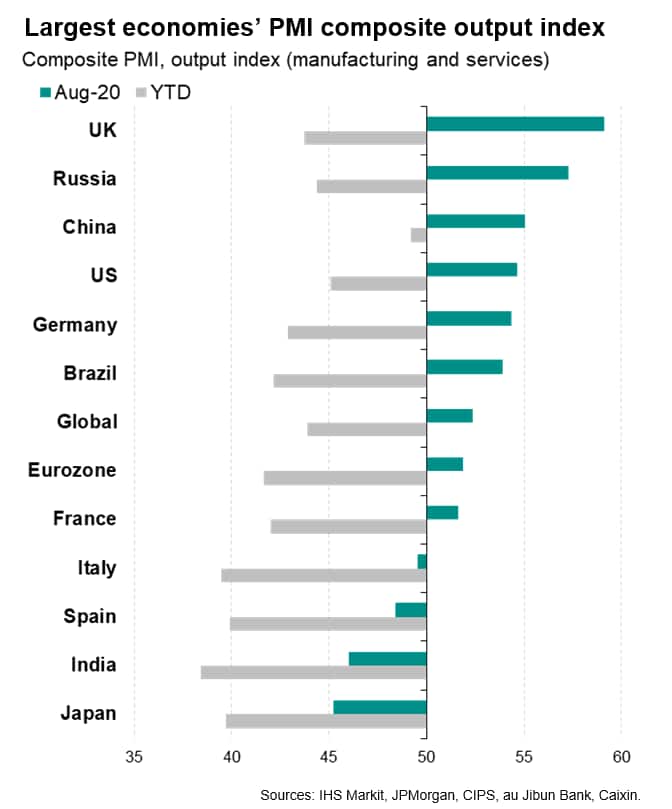 The United States also reported well-above global average performance, with the IHS Markit composite PMI climbing substantially to a 17-month high of 54.6 in August. The improvement was led by resurgent service sector activity, which showed one of the largest gains seen over the past two years, but manufacturing also reported the strongest output growth since last November.

Brazil was meanwhile notable in reporting a return to growth for the first time since February, with a composite PMI of 53.9 indicative of the fastest expansion since January 2013. Although service sector companies languished in a sixth month of contraction, manufacturers reported the largest jump in production in the 14-year survey history as factories reopened additional capacity.

The upturn was by no means universal, however, with Japan, India and some major parts of the eurozone most notably in decline.

Japan saw the steepest decline of the largest developed and emerging economies, albeit with the rate of contraction moderating for a fourth consecutive month. However, both manufacturing and services remained firmly in decline, the latter even seeing an increased rate of deterioration amid a steepening loss of overseas revenues in particular.

Trends were more mixed in the eurozone, which expanded for a second successive month thanks to rising output in both Germany and France. However, the eurozone PMI fell from 54.9 to 51.9 as upturns cooled in both France and Germany while Spain and Italy sank back into contraction after brief revivals in July. Manufacturing output continued to grow at a solid pace across the region in August, thanks mainly to solid expansions in Germany and Italy, but service sector growth almost stalled, led by downturns in Italy and Spain.

Growth in recent months can be tied to the degree to which economies have been constrained by efforts to contain the COVID-19 virus. The degree to which economies have 'locked down' in the fight against the pandemic can be gauged by IHS Markit's COVID-19 Containment Index. This gauge is based on a basket of measures applied by governments to control the spread of the pandemic, such as non-essential business closures, school closures and travel and mobility restrictions linked to social distancing policies. As these measures are tightened, the index rises towards 100 and a relaxation of measures causes the index to fall towards zero.

China, for example, has seen the smallest downturn in the year to August and has also seen the lowest degree of containment.

India and Italy have meanwhile recorded the steepest downturns and have registered the highest degrees of lockdowns. 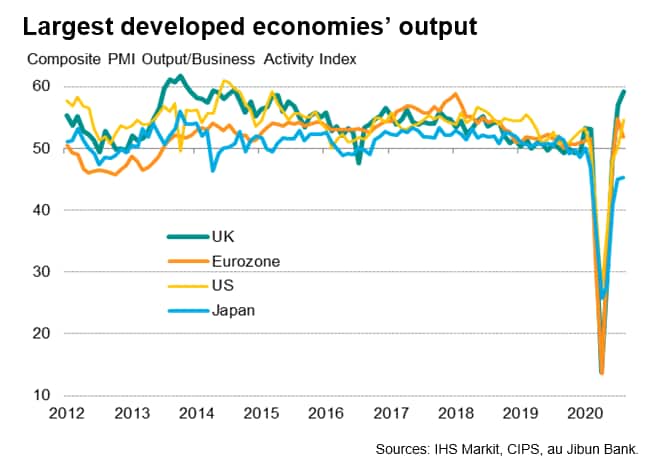 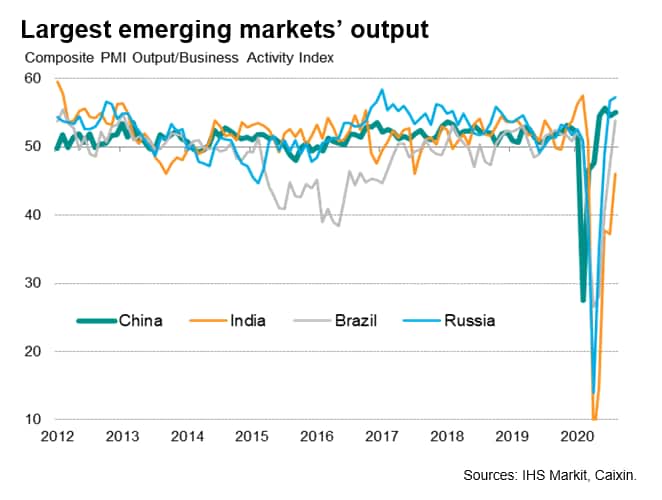 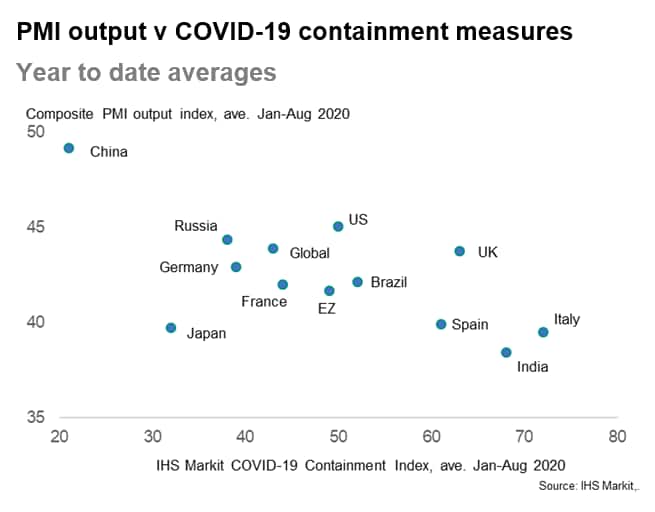 The renewed weakening of economic performances in Italy and Spain can meanwhile be linked to lockdown measures being tightened in August.

There have been some outliers, however, notably with Japan reporting a steeper rate of economic decline than lockdown measures would have suggested. However, this is potentially explained by higher degrees of voluntary social distancing in Japan, the country's relative high exposure to global trade and travel and tourism, as well as the lingering impact of last year's tax hike.

The UK economy has meanwhile fared somewhat better than the lockdown measures would have suggested, especially in August, though there are some suggestions that its rebound may be short lived. 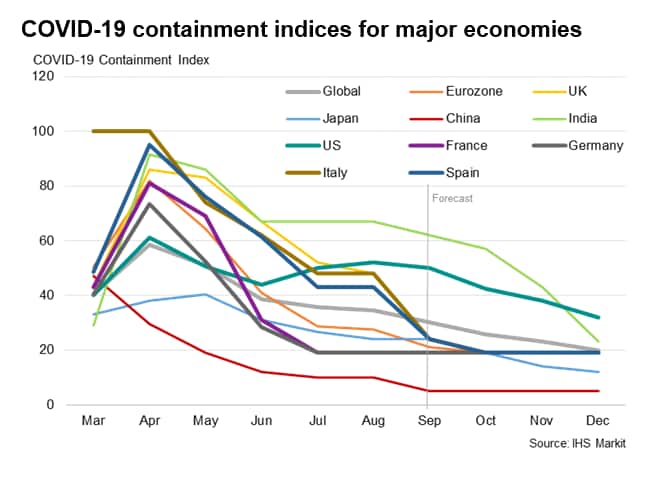 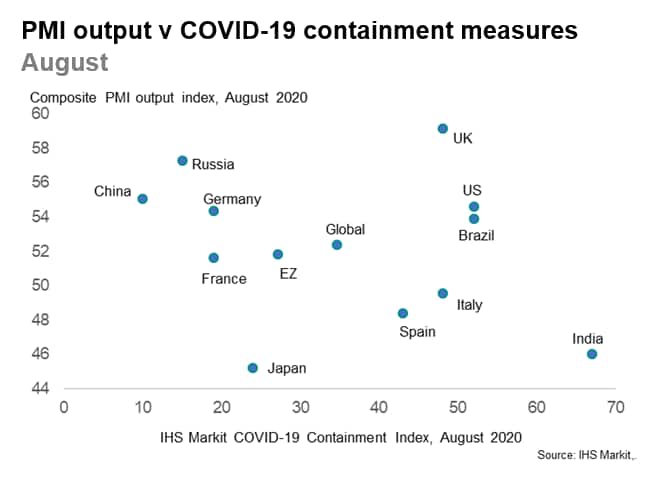 Other indicators provided deeper insights into future output trends. Worryingly, new order growth slowed in China and the eurozone in August, and the rate of decline accelerated in Japan, all boding ill for output growth in September. More encouraging were the signals from new orders in the US and UK, both of which saw growth accelerate. 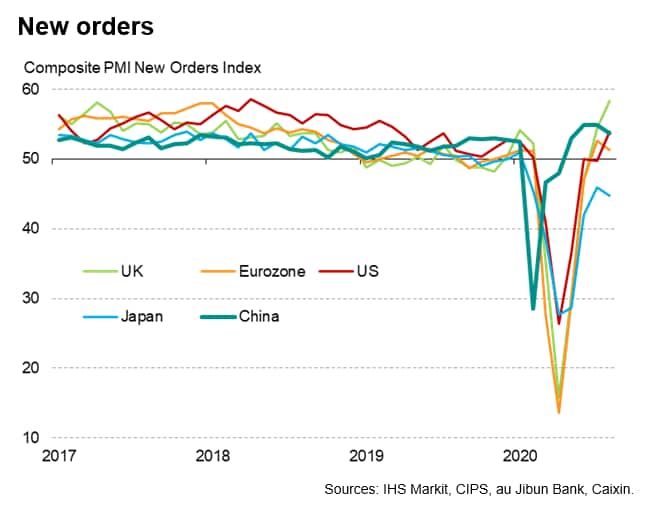 However, perhaps more importantly, of the expanding economies only the US saw faster growth of backlogs of work in August. These backlogs represent orders received by companies but not yet started or completed, and hence provide a useful guide to capacity utilisation. Rising backlogs hint that capacity will need to rise further in coming months to meet demand. Falling backlogs suggest firms may start cutting capacity. Hence the US, with its rising backlogs of work, was also the only major economy to report a robust increase in employment in August. China also saw backlogs rise, but at a slower rate, and consequently reported only a marginal gain in jobs.

Meanwhile, falling backlogs of work in the eurozone, UK and Japan were accompanied by further job losses, with the rate of job cutting even accelerating in the UK, so suggesting that companies have grown more cautious with respect to the outlook.

Government policies have naturally affected employment trends in many countries, employment may lag changes in output and cultural differences in the flexibility of workforces play a part, but with the UK's furlough scheme set to end in October, the worsening job picture in the UK sends a particularly worrying picture for the sustainability of the upturn, and highlights the danger of placing too much emphasis on current output growth over other indicators. It is also noteworthy that the US and China appear to be the only economies to see firms building capacity for faster growth in coming months. 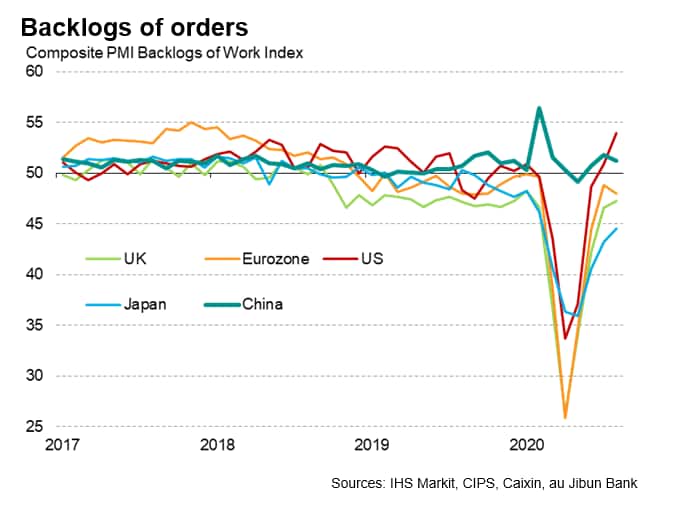 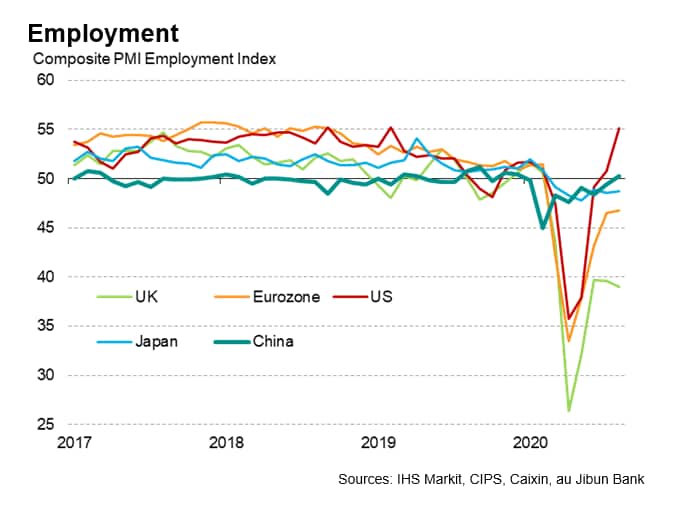 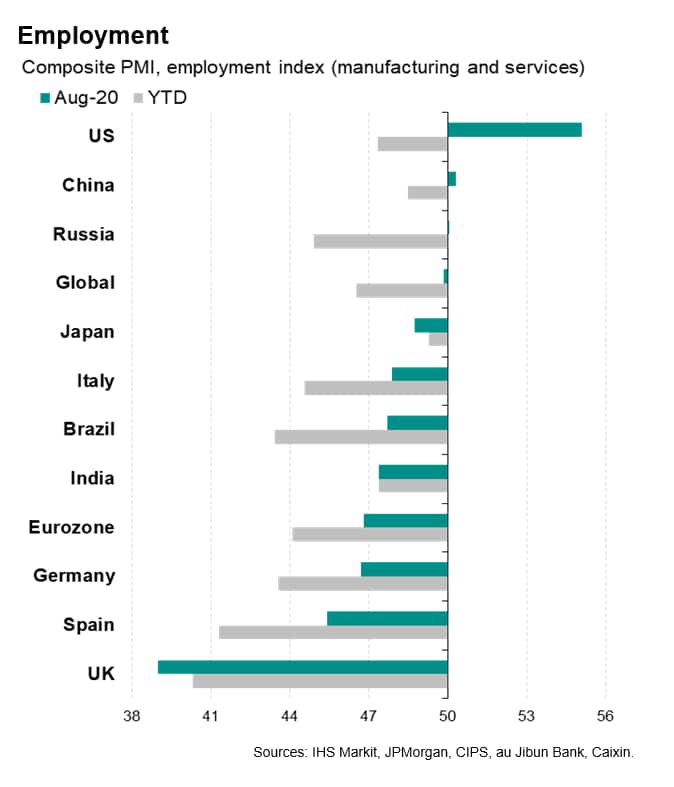 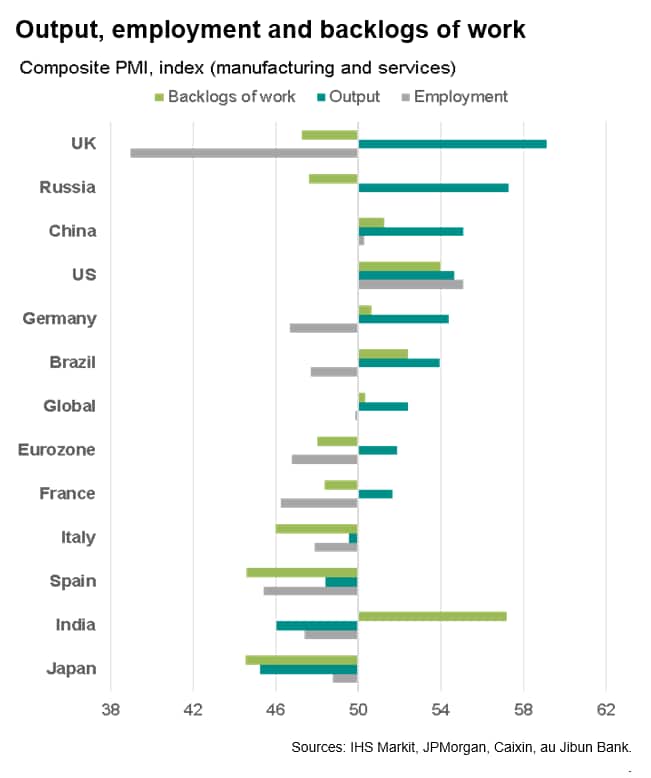