The JPMorgan Global PMI™ (compiled by IHS Markit) continued to indicate a robust expansion of the global economy in September, but national variations in economic performance remained marked, often due to varied service sector performances arising from coronavirus disease 2019 (COVID-19) restrictions. Employment trends have also varied markedly, likely due to policy differences, meaning the outlook for jobs has deteriorated in Europe and in particular the UK.

Of the largest developed and emerging economies, the UK reported the strongest expansion of business activity in September, albeit with growth moderating from August's six-year high, followed by Germany.

India and China also reported robust expansions, with the former fueled by the steepest rise in manufacturing activity recorded by any country in September, though service sector activity continued to slump. In contrast, China's growth was broad-based across manufacturing and services. The US, Russia and Brazil all also reported above global-average performances.

The strongest downturn was seen in Spain, followed by Japan and then France. Spain has only managed to record one month of growth since February, according to the PMI, with a renewed and accelerating downturn evident in both August and September, led by a steepening drop in service sector activity. France meanwhile fell into decline for the first time in four months, as rising factory output growth was countered by a renewed fall in service sector activity.

Japan has meanwhile failed to register any growth since the economy stabilised in January, although the downturn has moderated over the past four months. 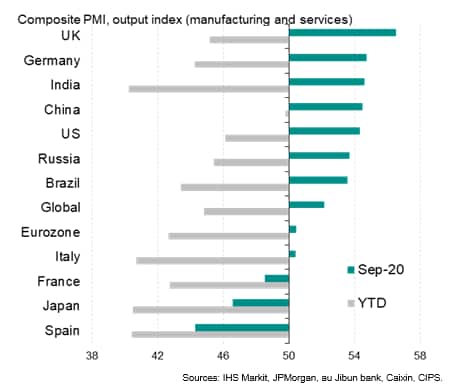 Manufacturing output rose in all of the 11 largest national economies covered by the PMI surveys with the sole exception of Japan, highlighting how the recovery is being driven by the goods-producing sector and a revival in global goods trade flows.

It was a different story in the service sector, however, where five of the 11 countries contracted, albeit with India only reporting a marginal decline. The UK reported the strongest service sector gain, followed by China and the US, while Spain saw the steepest deterioration.

Falling services activity in Spain, France and (to a lesser extent) Italy was often linked to worries of rising virus case numbers and increased precautions being either implemented or adopted voluntarily to prevent further infections. 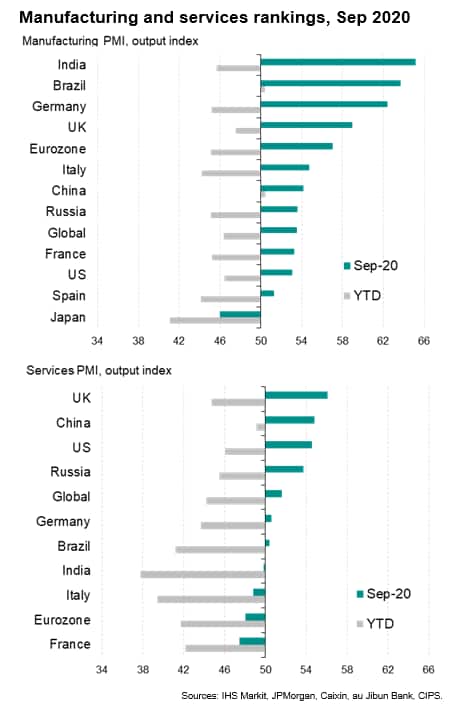 Only the US and China report rising employment

A curious development has occurred in the labour market. Whereas the UK reported by far the strongest output gain in September, it also reported the sharpest drop in employment. It has also seen the steepest loss of jobs so far this year of the 11 largest countries covered by the PMI. 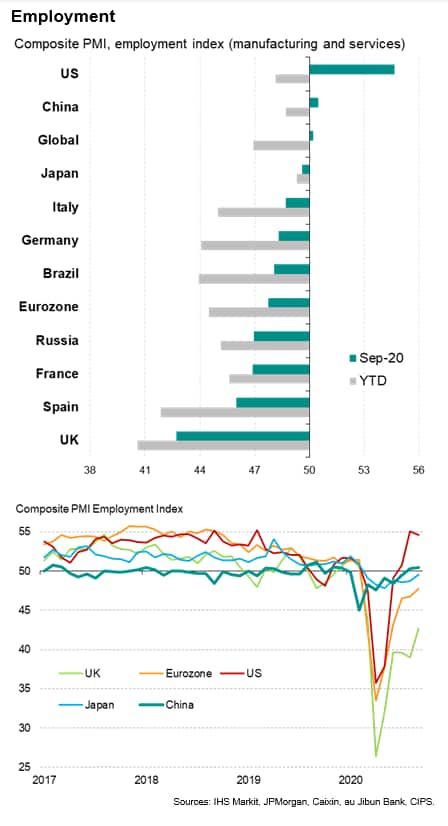 The PMI employment data in fact show a different trend to official jobless rates. In particular, while the PMI has shown job losses to have been greater in the UK and eurozone than the US so far this year, even at the height of the pandemic, the official data suggest the opposite.

While the jobless rate spiked higher in the US at the height of the pandemic, hitting 14.7% in April as employers quickly cut payroll numbers, official unemployment rates have remained relatively low in Europe. The latest numbers from the UK and Germany put unemployment rates at just 4.1% and 6.3% respectively.

These divergences in unemployment rates possibly reflect differences in the flexibility of labour markets, but more likely reflect differences in the nature of labour maket support from governments. In particular, while US measures have been directed at boosting the incomes of those that have become unemployed (with the exception of the Paycheck Protection Plan, aimed at smaller firms), European measures have been targeted at keeping employees on the payroll.

This raises the question of the extent to which redundancies will rise when support measures are withdrawn, especially in Europe and in particular in the UK, particularly if this support is removed at a time of ongoing COVID-19 containment. The PMI data suggest the UK has possibly been the most obvious case of employers having not reported redundancies yet due to the receipt of furlough support.

Official unemployment rates will therefore likely rise higher in western Europe as we head into early 2021, especially in the UK, where the widely-used furlough scheme (adopted especially heavily in the service sector) is replaced at the end of the October with a less supportive subsidy designed to encourage the retention of staff on a part time basis.

The PMI data also add to our expectations that joblessness peaked in the US and Canada in the second quarter of 2020, albeit with the labour market recoveries likely to continue to lose momentum in coming months as the principal rebound fades. Jobless rates will soon likely peak in emerging markets such as China, India, Brazil and Russia. 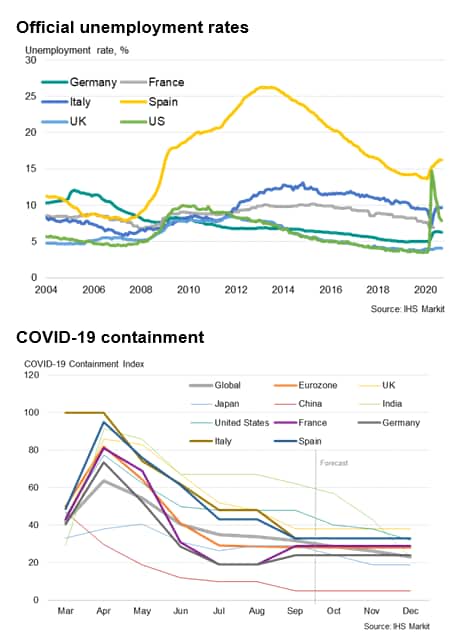