The latest KPMG and REC survey data, compiled by IHS Markit, showed a renewed upturn in overall UK recruitment activity at the end of 2019. Permanent placements rose for the first time in a year amid reports of some clients giving the green light to hiring plans after the decisive general election result. Billings received from the employment of temp staff meanwhile expanded at a quicker, albeit still mild, pace.

Although the election outcome helped to restore some business confidence, uncertainty around Brexit has not completely subsided and economic growth softened over the course of 2019. Consequently, demand for staff continued to rise at a historically muted pace, while many people remained reluctant to seek new roles.

The subdued labour market picture painted by the Jobs report also coincides with the trends observed in the UK PMI survey releases, which signalled declines in both output and employment when looking at the final quarter of 2019 as a whole.

The Report on Jobs survey, which monitors over 400 recruitment consultancies across the UK, provides advance signals of labour market trends. The December improvement is especially encouraging as in recent months the survey had anticipated a reduction in employee numbers (which have now declined in three successive periods) and softer earnings growth well in advance of official ONS data.

The Jobs survey data for 2019 as a whole highlighted a marked slowdown in hiring activity compared to the strong performances seen over the prior two years, as uncertainty around Brexit, a general election and signs of a slowing UK economy all weighed on recruitment decisions. Permanent placements fell into contraction at the start of the year, while the use of short-term workers appeared relatively limited, with temp billings growth remaining modest throughout 2019.

By the end of the year the picture brightened however, with permanent placements rising in December for the first time in 12 months. The upturn was largely linked to clients pressing on with previously delayed hiring plans following the decisive election result. However, the increase in permanent staff appointments was only mild overall, to round off the worst calendar year performance since 2009. 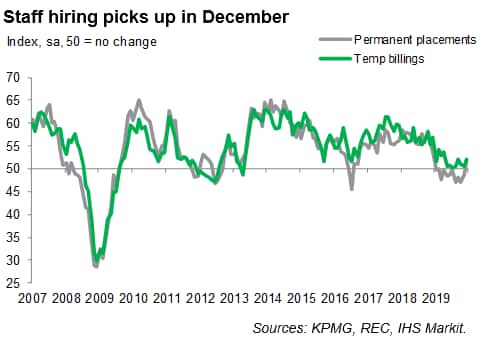 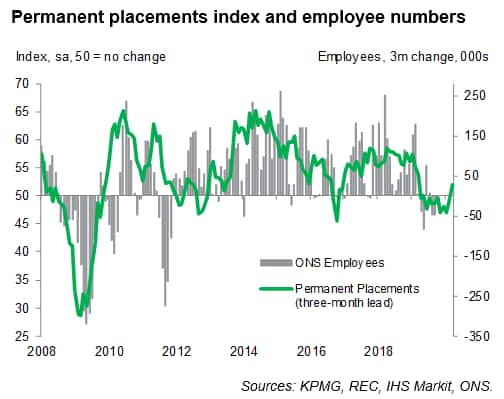 Vacancy trends deteriorate across all sectors

Demand for staff remained lacklustre in December, according to the survey, with growth of total vacancies picking up only slightly from November's decade-low. Detailed sector data showed a broad-based deterioration in vacancy trends in 2019 compared to the previous year. In terms of permanent jobs, the worst performances were seen for retail and construction, which saw outright declines in demand for staff on average in 2019.

The official jobs data have confirmed the gloomier vacancies trend. The latest ONS figures showed total vacancies falling throughout 2019 to date, with the latest reduction in November marking the largest annual rate of decline since the end of 2009. 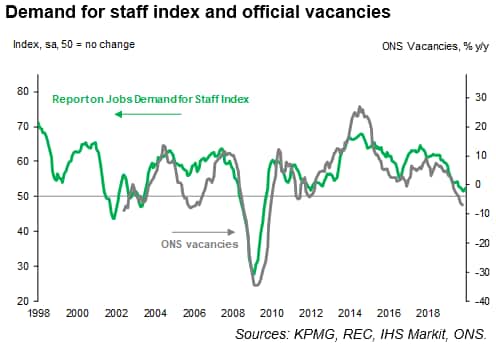 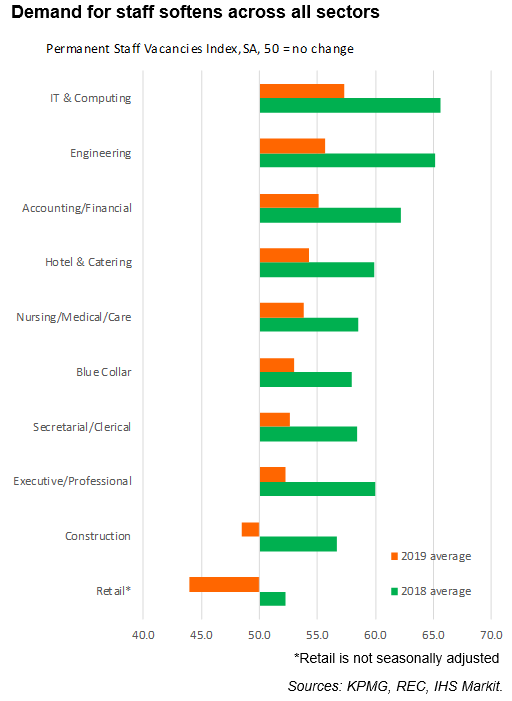 Uncertainty isn't just impacting the demand for staff, but also the supply of labour, with recruiters frequently commenting that people are becoming more risk averse in terms of seeking new jobs. Although not as severe as those seen throughout most of the past six years, the drop in candidate numbers remained sharp in December. Combined with an already historically low unemployment rate of just 3.8%, according to ONS data, and falling numbers of EU workers, this has made it increasingly difficult for businesses to find and hire suitable staff. The sustained drop in candidate supply has fed through to stronger pay pressures in recent years, with the survey indicating steep increases in starting pay as firms compete to attract scarce workers. However, recent survey data and official figures both suggest these pressures are starting to unwind as demand conditions soften.

Looking at the final quarter of 2019 as a whole, the recruitment survey shows starting salaries and temp wages rising at softer rates compared to recent years.

Official earnings data have also highlighted weaker pay pressures, with average nominal weekly earnings growth (excluding bonuses) easing from an 11-year peak of 3.9% mid-year to 3.5% in the three months to October. The latest increases in permanent starters' pay, which has a good relationship with official earnings data, are consistent with this official pay measure cooling further from its current rate to approximately 2.5%. 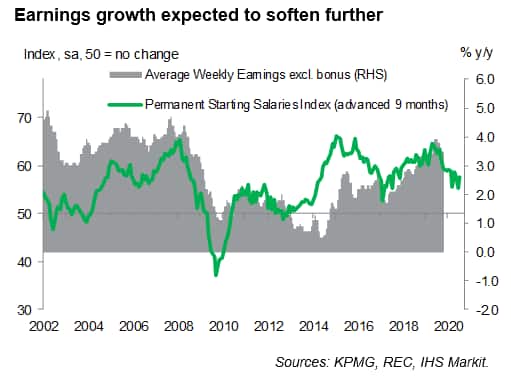 Rebound in hiring during 2020 far from certain

The latest recruitment survey therefore points to a scenario of decelerating demand for workers and signs of slowing wage growth, to suggest any rebound in recruitment activity in the New Year is likely to be limited. Businesses still need greater clarity on the future relationship of the UK and the EU, while companies face an additional headwind of a slowing domestic economy, which is also likely to lead firms to maintain a cautious approach to hiring and investment.