The headlines from the latest official job market data were undoubtedly positive: the unemployment rate fell to 3.8% in the three months to March, its lowest since 1974. The employment rate was meanwhile the joint-highest on record at 76.1%, with 99,000 extra people working during the first quarter. Wages also grew faster than inflation, up 3.2% on the year (including bonuses) putting annual real wage growth at 1.3%.

However, dig deeper and the data are less encouraging, hinting a slowdown in hiring which tallies with data from both the KMPG/REC recruitment agency survey and the IHS Markit/CIPS PMI. Heightened uncertainty has driven risk-aversion among employers, and encouraged a shift from taking on permanent staff. There are also signs that pay growth has begun to cool amid weaker growth of demand for staff. 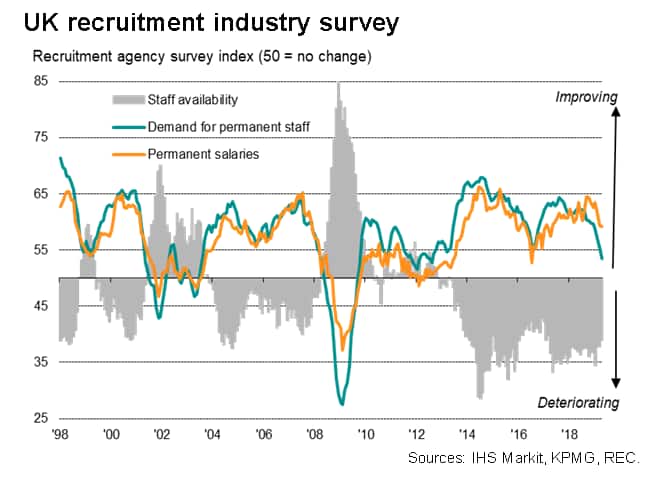 Both the PMI and recruitment industry surveys recorded a net fall in employee jobs for the third time in the past four months in April. Although the declines were only modest, the downturns represent a major turnaround from the strong hiring seen up to late last year and indicates the weakest hiring spell since the end of 2012. 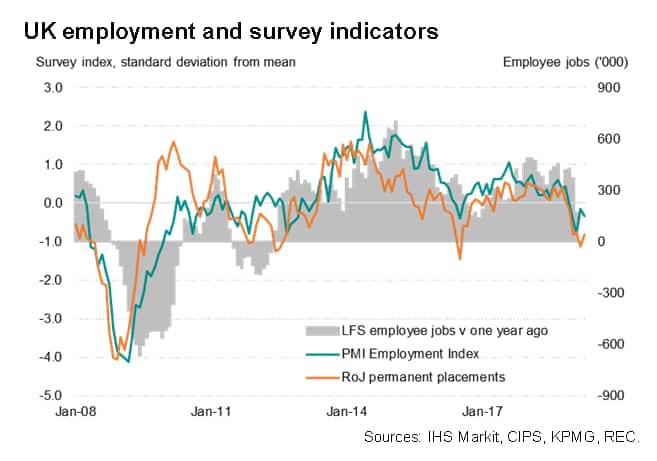 The recruitment industry survey also showed demand for staff from employers to have grown in April at the weakest rate since August 2012.

The official labour market data have signalled a similar cooling of hiring so far this year.

The headline employment numbers were buoyed, however, by a 90,000 increase in the number of people self-employed during the first quarter. While representing a welcome further improvement in the overall numbers of people in work, the near stagnation in employee numbers alongside the rise in self-employment adds weight to the argument that employers have become risk-averse in relation to adding to permanent payroll numbers. This suspicion is further fuelled by the continued rise in temporary and contract work recorded by the recruitment industry at a time of falling permanent placements. The gap between temporary and permanent staff demand signalled by the survey in April rose to the widest since May 2009. 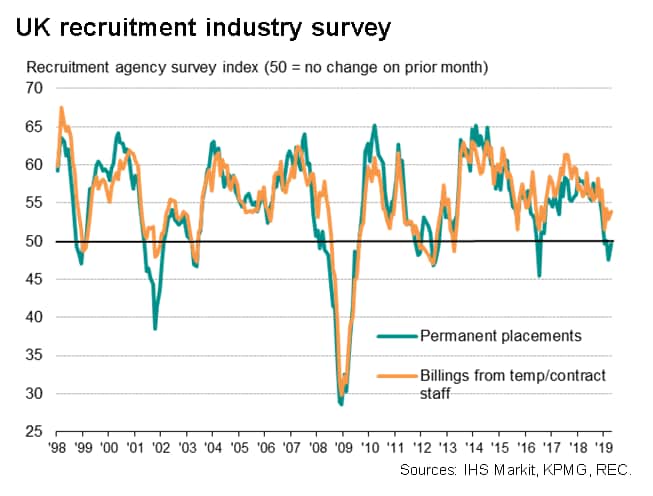 At the same time, a reluctance to change jobs due to heightened uncertainty has exacerbated skill shortages linked to the low level of unemployment, leading to a further drop in the availability of staff to fill vacancies. The number of vacancies per unemployed person has fallen to its lowest since data were first available in 2001, and the recruitment industry survey showed candidate supply problems worsening in April, continuing a remarkable run of deteriorating staff availability over the past five years. 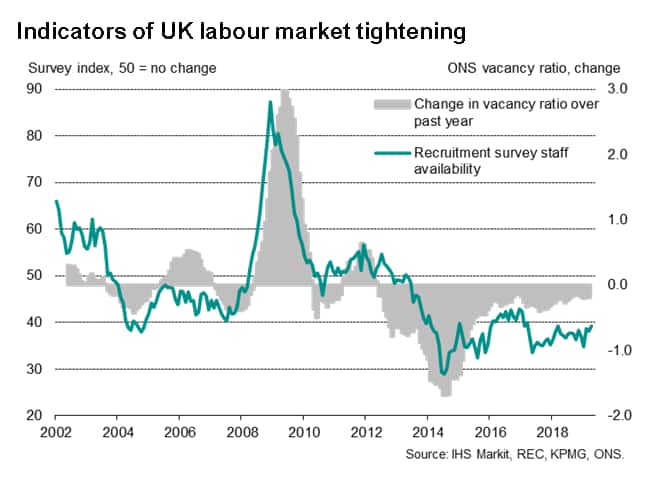 The combination of rising employment and falling candidate supply pushed pay up again in the three months to March, though there was evidence that the softening demand for staff indicated by the surveys has fed through to weaker pay growth.

Regular employee pay (excluding bonuses) rose 3.3% in the three months to March, with private sector pay up 3.5%. However, these rates were down from 3.4% and 3.6% respectively in the three months to February, providing a further indication that pay growth peaked at the start of the year. In March alone, regular pay growth was up just 2.9%, its weakest annual rise since last June.

This softening of pay growth was signalled in advance by the recruitment industry survey, which has recorded an easing in growth of pay awarded to people starting new permanent jobs in recent months. Having peaked in September of last year, the survey pay gauge indicated the slowest rise in salaries for two years in April, suggesting the official pay data will cool further at the start of the second quarter. 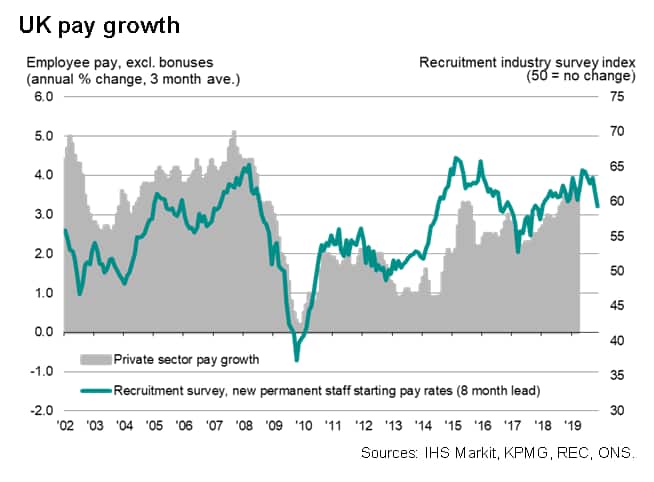