The gradual rollback of pandemic restrictions and the roadmap out of lockdown led to a flurry of hiring activity across the UK at the start of the second quarter, according to the latest UK Report on Jobs data compiled by IHS Markit on behalf of KPMG and REC.

However, the latest survey, which monitors over 400 recruitment consultancies across the UK, also pointed to a renewed decline in total candidate availability after a period of rapid redundancy-related expansion, which has pushed up rates of starting pay. 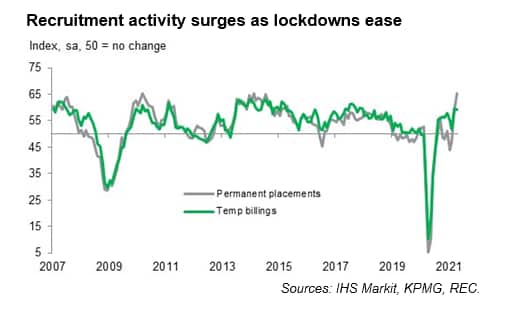 Recruiters signalled the second-steepest increase in permanent staff appointments since data collection began 23-and-a-half-years ago (surpassed only by that seen in October 1997) during April. At the same time, temp billings growth softened only slightly from March's 40-month record

The easing of virus restrictions and return to more normal business conditions drove the marked upturn in hiring, according to recruitment agencies, with clients generally growing more optimistic about the economic outlook amid a successful vaccine rollout.

The improved hiring trends add to evidence, including the recent IHS Markit/CIPS UK PMI surveys, that labour market conditions are improving as greater market confidence has boosted demand for workers. 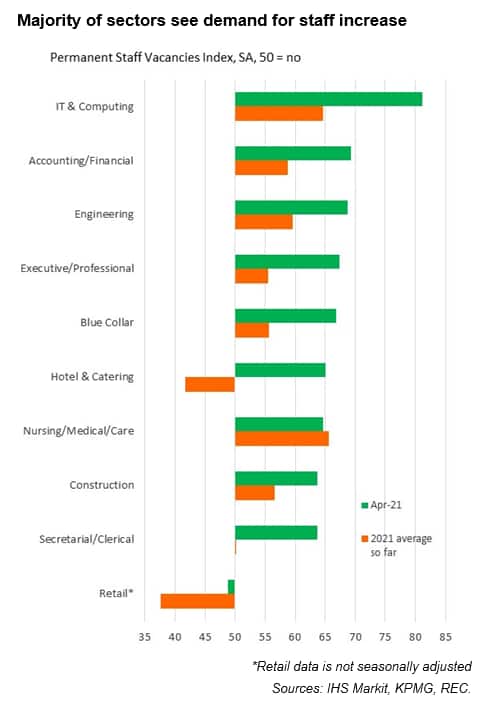 Notably, vacancy growth accelerated to a 23-year record high in April, with sector data suggesting the recovery in demand has become much broader, led by areas such as IT & Computing and Accounting/Financial.

Retail was the only sector to register a fall in vacancies in April, though the pace of decline was only mild, and the weakest seen since the onset of the pandemic. Hospitality, which was also severely hit by restrictions, meanwhile saw a marked rise in vacancies during the latest survey period, reflecting the roadmap to reopening the economy from the lockdown.

The rebound in overall staff demand suggests that vacancy numbers are recovering strongly since plummeting to a record low last summer. 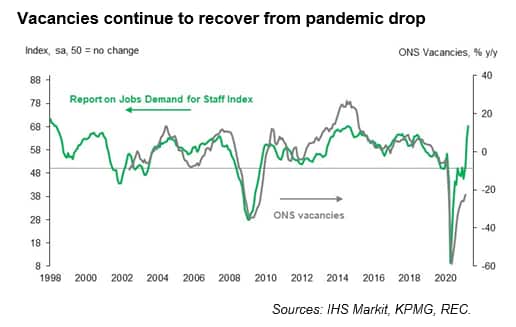 However, while demand for workers has revived, the latest survey pointed to a fresh fall in overall candidate availability. The reduction was the quickest seen since January 2020 and sharp, with the availability of both permanent and temporary staff deteriorating markedly. This was a stark contrast to the substantial increases in candidate supply that have been seen over much of the past year, which were frequently linked to redundancies due to the pandemic.

Recruiters often mentioned that people were reluctant to seek new roles over fears of job security, or that the furlough scheme had depressed the supply of workers. There were also mentions that fewer EU workers and recent changes to IR35 legislation had impacted candidate numbers.

Overall, the data suggest that unemployment will remain relatively low as labour market conditions start to tighten and the furlough scheme continues to support millions of employees. 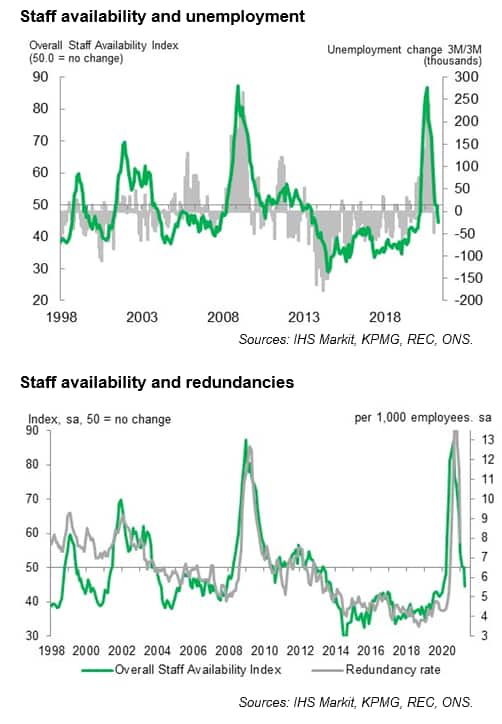 Pay pressures pick up as competition for staff increases

Reduced candidate supply and rising demand fed through to stronger pay pressures, with recruiters often mentioning increased competition for skilled staff. Both starting salaries for permanent workers and temp wages rose at the quickest rates for over a year. 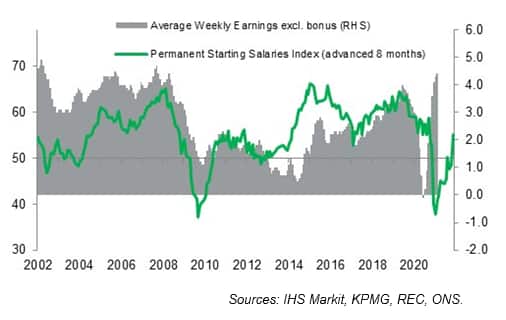 Outlook is bright, but risks remain

The survey data indicate that the labour market recovery is well underway as businesses ramp up operations for a planned full reopening of the economy this summer. The easing of lockdown measures, and rapid rollout of vaccinations, have made UK firms much more confident about prospects for the year ahead, with optimism around the 12-month outlook hitting its highest since at least 2012, according to UK PMI data.

This suggests the strong hiring trend will continue in the months ahead, though downside risks remain. Notably, the risk of new COVID-19 virus variants, the delay of the removal or reimposition of any restrictions, and the end of the furlough scheme this September, could all impact confidence and dampen performance.