UK GDP on course for 0.1% decline in second quarter

The UK economy grew 0.3% in the three months to May, according to GDP data from the Office for National Statistics, representing a slowing in the pace of expansion for the second successive month from the robust 0.5% rate seen in the first quarter.

More worryingly, although output rose 0.3% in May alone, the improvement failed to fully offset a steeper 0.4% decline seen in April, leaving output for the second quarter so far running 0.1% below the first quarter.

The details of the data for the second quarter so far, up to May, show that manufacturing output is running 2.2% below the first quarter, while construction output is down 0.9%. The service sector continued to support the economy, with output so far up 0.2% on the first quarter, but in fact stagnated in May to suggest that this pillar of support is starting to fail.

Some of the weakness seen so far in the second quarter reflects a waning of special factors which boosted growth in the first quarter, specifically a big build-up of inventories as companies built safety stocks ahead of a potentially disruptive Brexit.

Similarly, some of the fall in manufacturing output in April had been due to temporary car factory shutdowns, as summer maintenance was brought forward in case of Brexit related supply-chain disruptions in April. A resumption of production buoyed the manufacturing numbers in May. 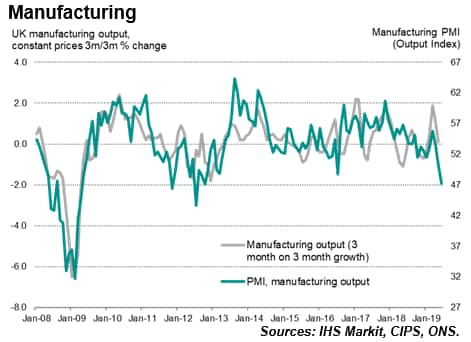 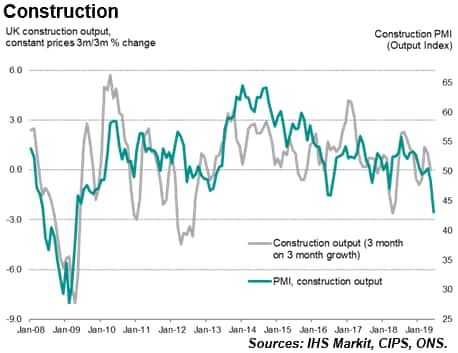 However, as the fog from these one-off factors clears, it's becoming increasingly evident that the underlying health of the economy is also deteriorating.

The IHS Markit/CIPS PMI surveys in fact suggest things got worse in June. Apart from the 'flash crash' in business activity immediately after the 2016 Brexit vote, businesses reported the steepest drop in output since 2009 at the end of the second quarter.

The decline reflects the steady attrition of demand over recent months: the surveys show that inflows of new business fell in June for the fifth time so far this year, with the rate of decline gaining momentum to reach the second-steepest since April 2009.

The June decline in the PMI surveys pushed the headline index further into territory historically consistent with a bias towards looser monetary policy from the Bank of England, and the official data are now seemingly also heading in this direction. 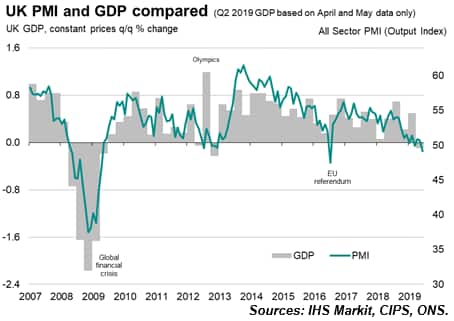 Look out for our business outlook surveys, released Monday 15th July, for further insights into how businesses in the UK are expecting the coming year to proceed, with indicators covering output, employment, investment and pricing expectations.