The underlying pace of economic growth slowed at the start of the fourth quarter, according to the latest official data. The numbers come on the heels of more up-to-date survey evidence which suggests the economy is approaching stall speed and could even contract as we move into 2019 unless demand revives. 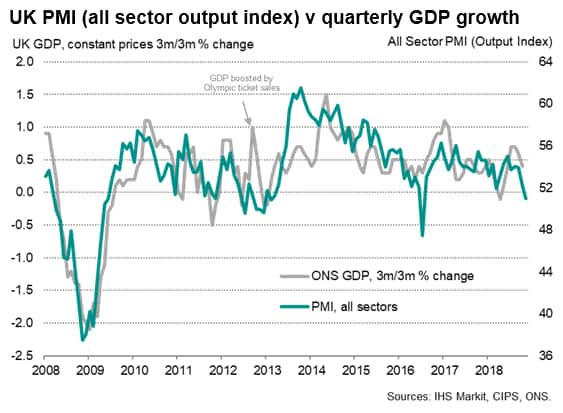 Gross domestic product (GDP) rose 0.1% in October, according to the Office for National Statistics (ONS), in line with expectations. While the increase was an improvement on the flat picture seen in the prior two months, the more important three-month growth rate slowed to 0.4%, down from a strong 0.6% expansion seen in the three months to September. 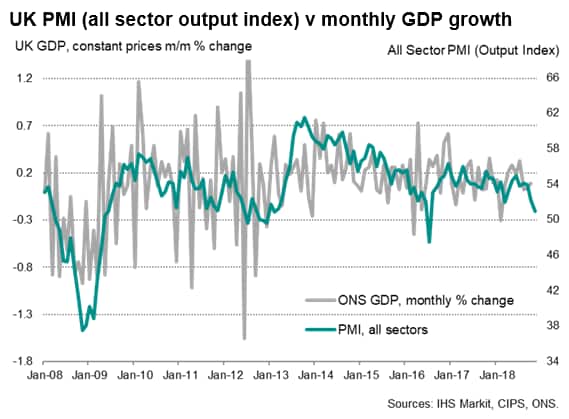 This easing in the underlying pace of growth is in line with the evidence from business surveys such as the IHS Markit/CIPS PMI, the latest data from which indicated that the economy stalled in November. With the survey's forward-looking gauges such as inflows of new work and business sentiment also deteriorating, modest growth of just 0.1% is indicated for the fourth quarter, with an increased risk of the economy contracting as we head into 2019 unless demand perks up in coming months.

Slower growth of spending and investment is no surprise and is a rational response to intensifying Brexit uncertainty, which has been exacerbated by a broader global economic slowdown, especially in the eurozone.

The outlook for growth therefore very much depends on Brexit developments over the coming days, weeks and months, and the surrounding uncertainty makes forecasting extremely difficult. However, the widely-expected slowing of the economy in the lead-up to the UK's separation from the EU is now clearly evident, leaving the big question of whether the economy will bounce back alongside a smooth Brexit process or slide into decline.

In the detail, industrial production fell 0.6% in October, of which manufacturing output was down 0.9%. Construction industry output meanwhile fell 0.2%, leaving the service sector as the only major part of the economy to expand at the start of the fourth quarter, though even here the 0.2% expansion was only modest.