December's PMI survey data sadly lacked festive cheer, indicating that the economy contracted for the third time in the past four months. With the headline flash* IHS Markit/CIPS Composite PMI (measuring output across both manufacturing and services) dropping to 48.5 from 49.3 in November, the latest decline was the second-quickest recorded over the past decade, exceeded only by the slump in output following the 2016 referendum.

The weak reading increases the likelihood that the economy contracted slightly in the fourth quarter as Brexit-related uncertainty intensified in the lead up to the general election. A simple regression-based model puts GDP on course for a 0.1% decline in the three months to December given the recent PMI readings.

Manufacturing output fell at a rate exceeded only once since the height of the global financial crisis in early-2009, but output of the vast service sector also fell for a second successive month, representing the first back-to-back declines since 2009. 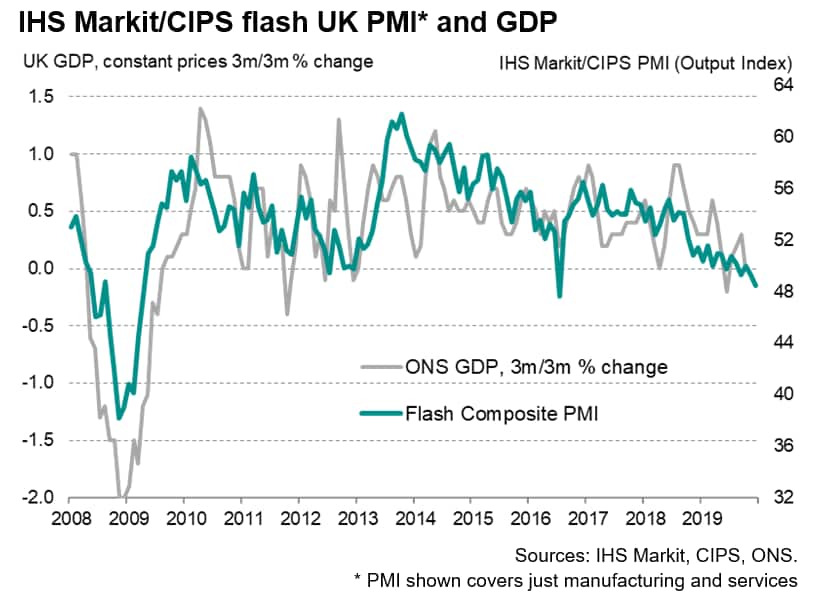 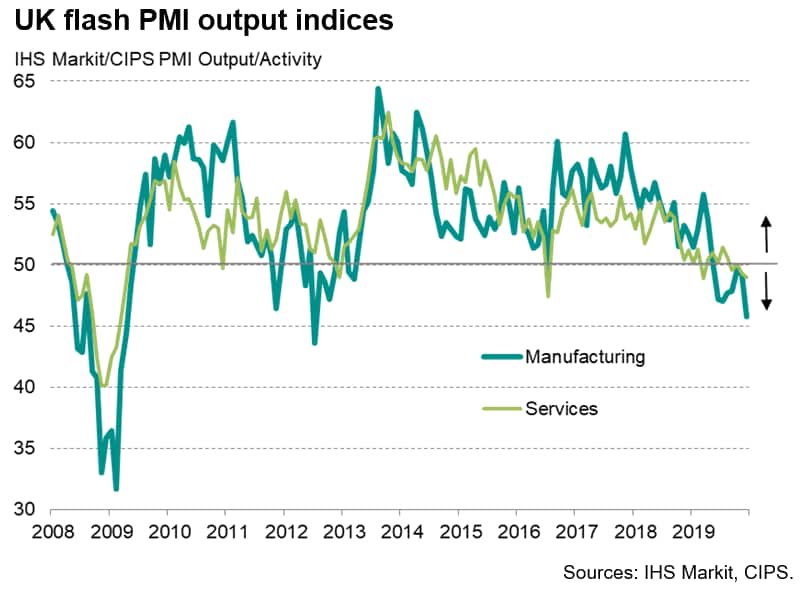 New orders fell for a fifth straight month, causing jobs to be cut for a fourth successive month as firms scaled back operating capacity in line with weakened demand. The ongoing loss of jobs represents the longest period of job shedding since 2012. 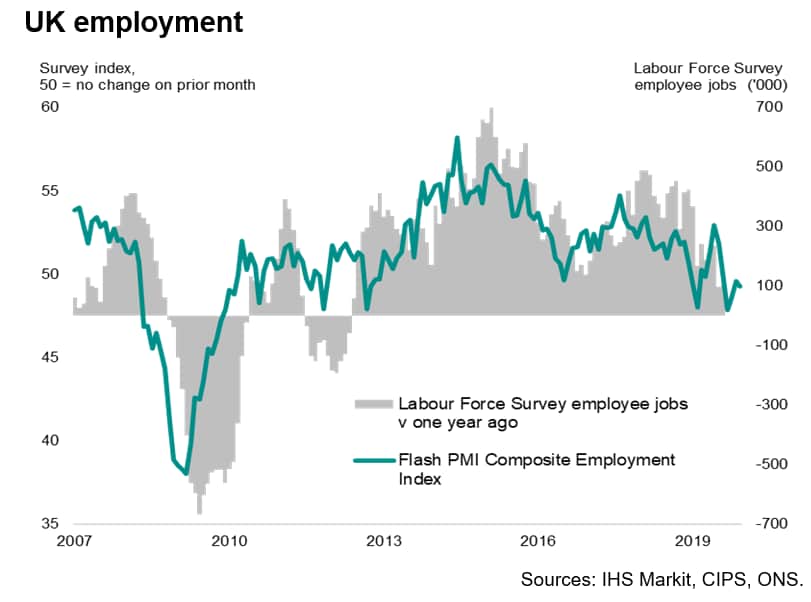 Brexit uncertainty was again widely blamed for disappointing demand, with customers often postponing orders or being increasingly cautious in relation to spending due to intensifying uncertainty heading into the general election. 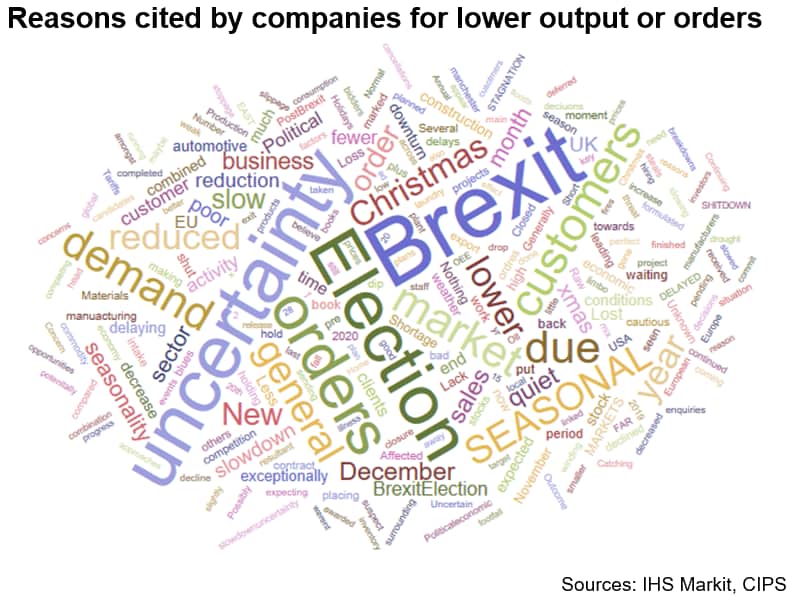 However, it was notable that the principal drag on order books was falling export sales. Overseas demand for UK-produced goods and services has slumped in the past two months to an extent not seen since at least 2014, in part linked to signs of slower economic growth in key export markets such as the eurozone, but also due to EU-based customers shifting to other suppliers. 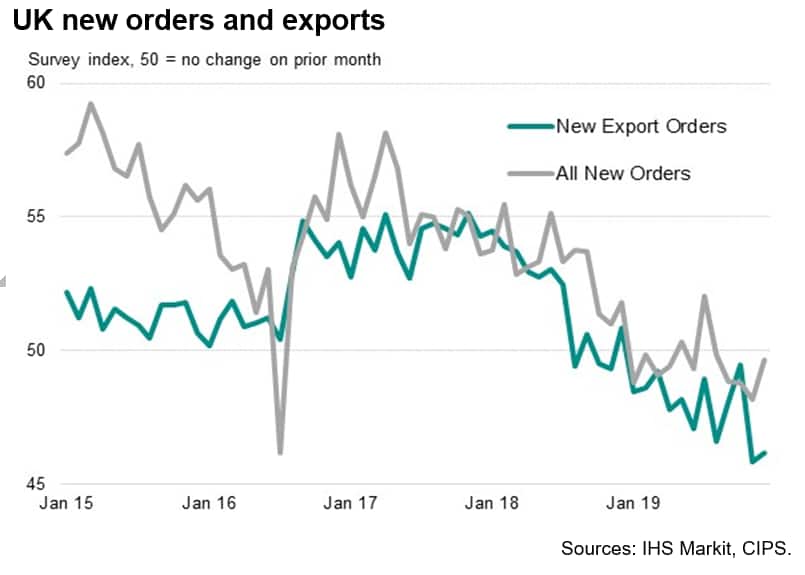 Any positive aspects of the survey came largely from the sentiment indicators, with business confidence rising to the highest since June as firms hoped that the election will bring clarity on the outlook and remove some of the uncertainty that has been holding back demand.

The decisive victory for Boris Johnson's Conservative party gives the government a working majority to push through its Brexit agenda to a degree not possible over the past three years. The expectation among many, including the Bank of England, is that this will unleash pent-up spending and investment that had previously been put on hold amid Brexit uncertainty. The first signs of any such improvement will likely be picked up by the PMIs in coming months, first via the business expectations index and secondly via inflows of new work placed at companies. Employment should also start to pick up again if companies show greater risk appetite.

One potential downside of the election result could be a further suppression of export demand via the strengthened exchange rate, which will raise the cost of UK goods in overseas markets. A corollary, however, is that import prices should fall, helping support consumer spending.

Furthermore, uncertainty has not been eradicated - notably in respect to the UK's future trading relationship with the EU - and will likely continue to dampen business investment. The final EU-UK relationship could be closer to a "hard" Brexit than the current frictionless trade.

Eyes turn next to the Bank of England, where recent weak economic data prompted two of the nine Monetary Policy Committee members to vote for lower interest rates. We see a rate cut at the next MPC meeting on 18th December as unlikely, and the promise of looser fiscal policy suggests that the next move in policy rates could well be a hike, though not - we believe - until 2021. GDP growth in 2020 is currently forecast at just 0.5%, albeit with risks tilted to the upside. 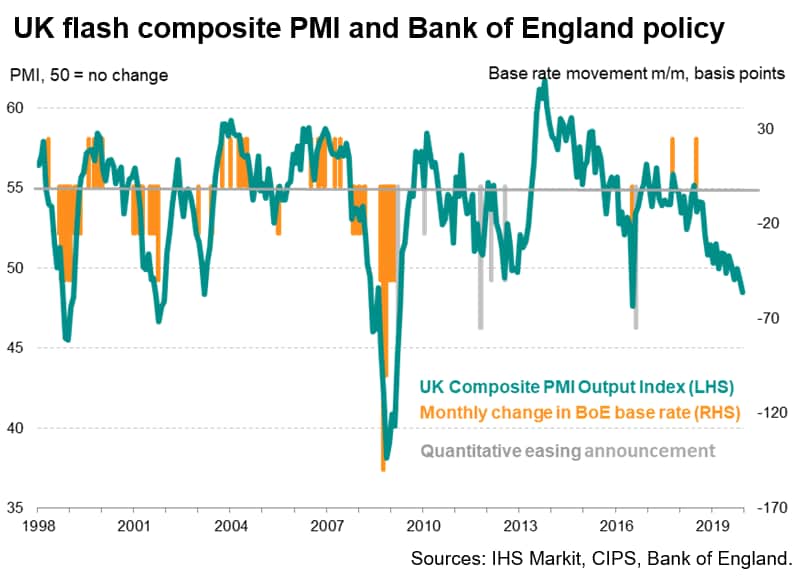 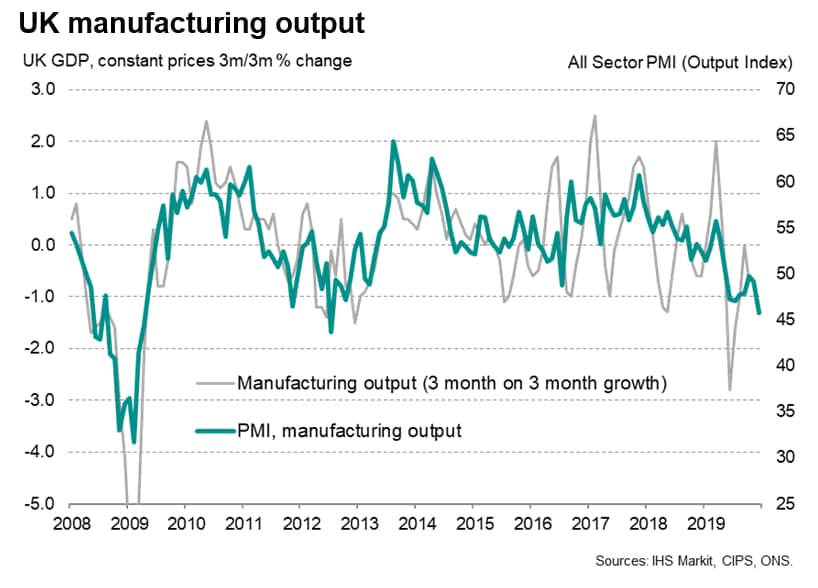 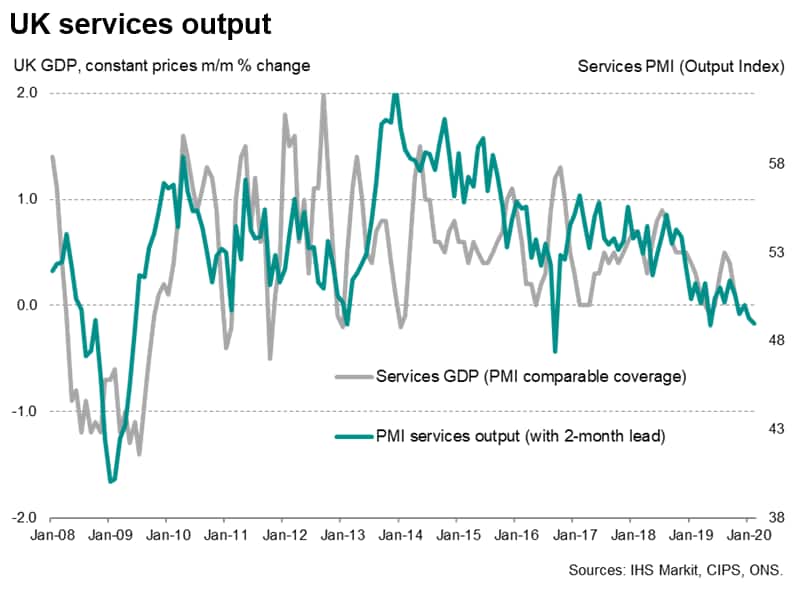 *The flash readings are based on approximately 85% of usual replies received each month and are designed to provide an accurate indication of the final data. Analysis shows the flash UK output index varies on average just 0.6 index points from the final readings (ignoring +/- sign).