The UK economy rebounded from two months of decline in March, according to the latest flash PMI data from IHS Markit and CIPS. Business activity grew at its fastest rate since last August as children returned to schools, businesses prepared for the reopening of the economy and the vaccine roll-out boosted confidence. The headline PMI covering both manufacturing and services rose from 49.6 in February to 56.6 in March.

The surge in business activity was far stronger than any economists expected, according to Reuters polls, and hints at only a modest contraction of GDP during the first quarter, adding to evidence that the economy has shown far greater resilience in the third lockdown compared to the first. 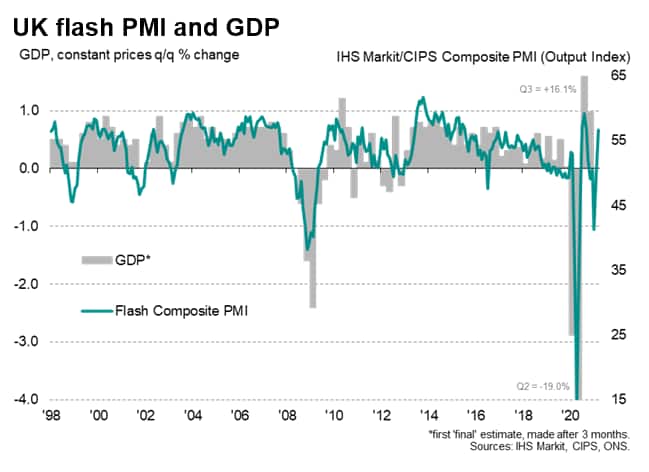 Companies reported an influx of new orders on a scale exceeded only once in almost four years, and business expectations for growth in the year ahead surged to the highest since comparable data were first available in 2012. Employment consequently rose for the first time since the pandemic struck as firms expanded capacity in response to the new inflows of work and brighter outlook.

The encouraging readings on future expectations, job creation and new orders all point to robust economic growth in the second quarter, especially if virus restrictions are lifted further (as currently planned). 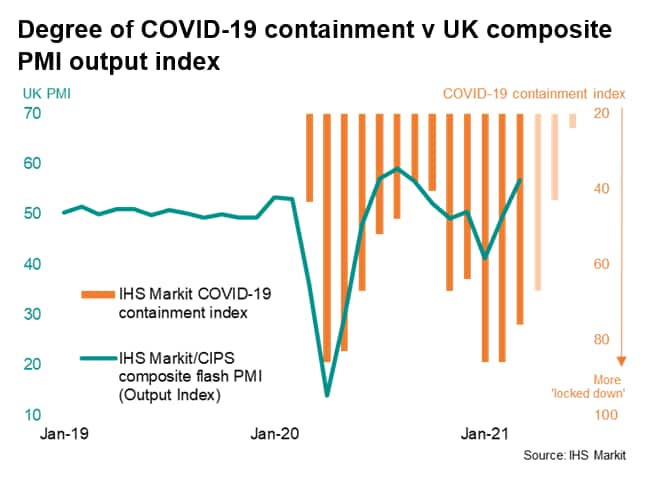 Service sector growth rebounded especially sharply after four months of decline, with March seeing the quickest monthly increase in business activity since last August. New business inflows bounced back after five months of decline, with backlogs of work also rising again for the first time in six months as many service providers struggled to cope with the influx of new work.

Service sector employment rose for the first time in 13 months, with hiring also boosted by business expectations for the year ahead surging to the highest since January 2004. Exports of services continued to fall, however, down for a fourteenth successive month, though some encouragement can be gleaned from the rate of decline easing to the weakest recorded since the start of the pandemic.

The service upturn was led by a revival of transportation & communications and business-to-business services, the former enjoying the biggest bounce since mid-2002 and the latter posting the steepest monthly gain for seven-and-a-half-years. Financial services activity also picked up sharply, registering the second-quickest expansion for four years. In contrast, activity fell in consumer services and hotels & restaurants, albeit with the latter seeing the smallest decline since the pandemic hit, with the exception of last August. 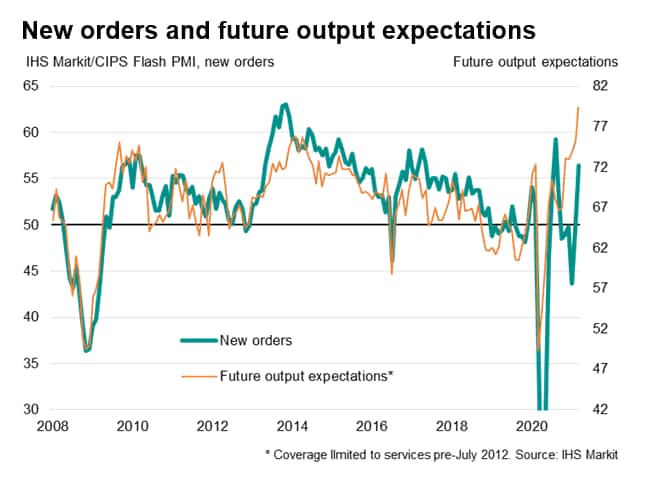 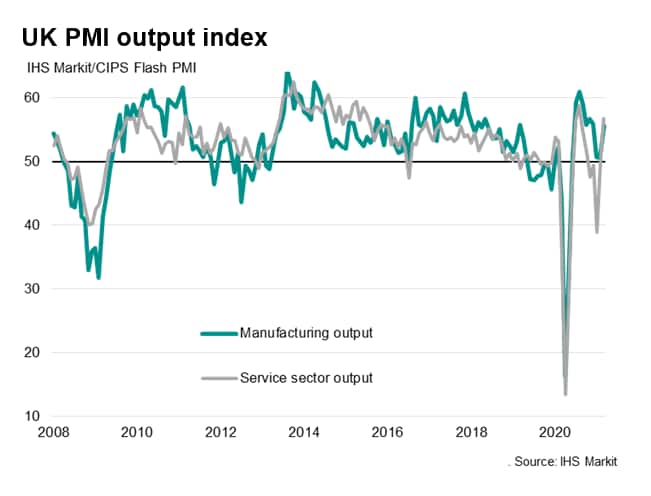 Manufacturing output also grew robustly, having come close to stalling in the first two months of the year. Near-stagnant exports subdued overall order book growth, which nevertheless hit the highest so far this year on the back of resurgent domestic demand. With business expectations at their most optimistic for seven years, factories were encouraged to take on staff at a rate not seen for three years. Firms were frustrated by another near-record lengthening of supplier delivery times, however, which curtailed purchases of inputs and limited production. Inventories of finished stock fell at the sharpest rate since September 2009 as a result, with a particularly steep decline in the autos sector.

Output growth was recorded for all major segments of manufacturing with the exception of transport, where car production was disrupted by supply shortages, notably for semiconductors. Encouragingly, new orders rose for all areas of manufacturing. 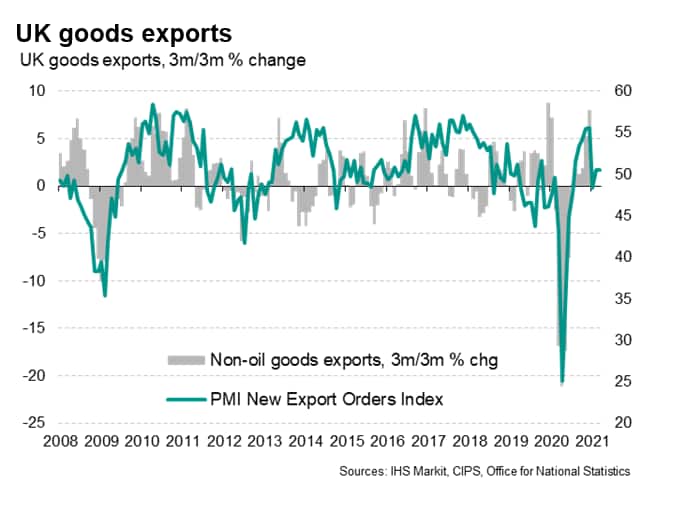 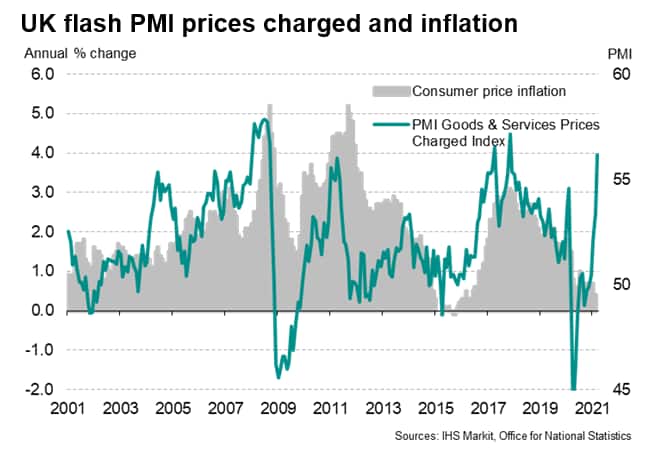 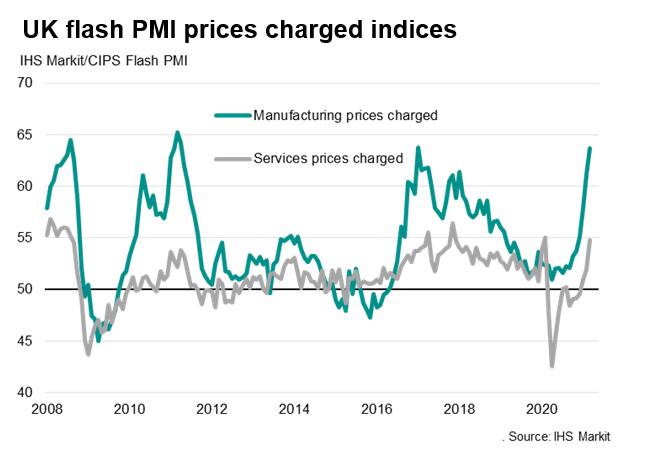 In manufacturing, many of the price hikes reflected shortages of inputs, with global supply chain pressures due to the bounce-back in demand after COVID-19 lockdowns exacerbated by Brexit-related shipping delays. 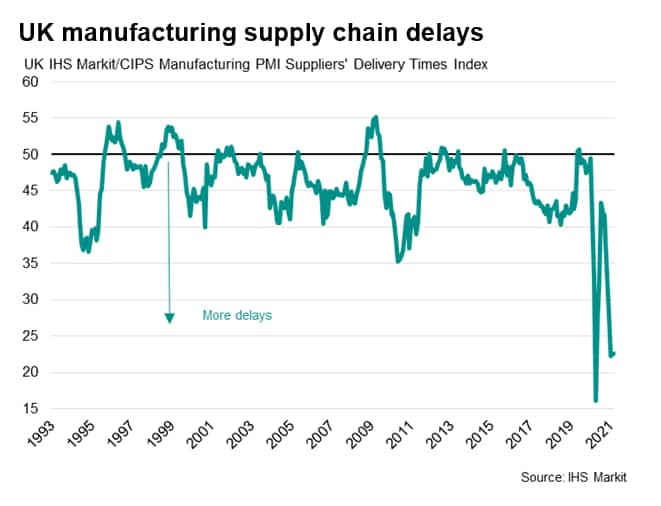 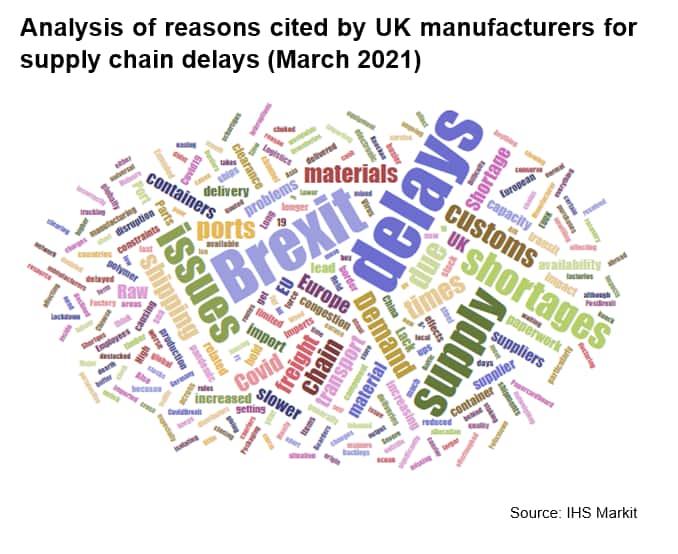 Worries therefore persist, especially in relation to near-record supply chain delays, around a continued fall in exports and sharply rising prices, all of which are making life difficult for many companies. Many consumer-facing companies meanwhile remain constrained by COVID-19 restrictions, which are likely to curb the overall pace of economic growth for some time to come, especially if we see a third wave of infections.