The flash PMI data show the UK economy being hit once again by COVID-19, with growth slowing sharply at the end of the year led by a steep drop in spending on services by households. Some brighter news came through from manufacturing, where an easing of supply chain delays helped lift production growth, but more importantly also helped take some upward pressure off prices to hint at a peaking of inflation.

With COVID-19 infections set to rise further in coming weeks due to the spread of the Omicron variant, and more restrictions being introduced, the pace of economic growth looks likely to continue to weaken as we head into 2022. The bigger uncertainty will be on how rising global infection rates might cause further supply and labour shortages, and whether this means the easing of inflationary pressures seen in December proves frustratingly short-lived. 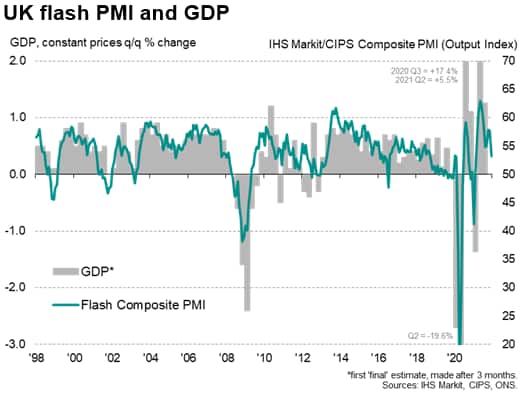 The UK economy is ending 2021 on a disappointing note, with the pace of growth slowing sharply in December as COVID-19 worries once again disrupt business activity. The IHS Markit/CIPS composite PMI output index, covering both services and manufacturing, fell from 57.6 in November to 53.2 in December, according to the early 'flash' reading, indicating the slowest rate of expansion since the lockdowns at the start of the year. 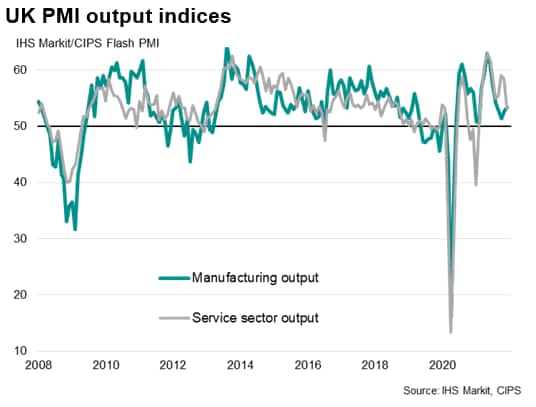 The slowdown reflected a sharp weakening of service sector growth to the slowest in ten months, attributed primarily to rising COVID-19 case numbers and growing concerns over the Omicron variant. Health worries and new restrictions were often reported to have deterred spending, both by businesses and households, causing service sector new business to expand at the slowest pace since the recovery began in March. Growth of new orders was dragged lower in particular by a renewed slump in exports of services, which suffered the steepest fall since February amid reports of a drop in travel due to the new virus wave.

Activity fell sharply in the hotels, restaurants, travel and transport sectors, and ground to a halt in other consumer-facing businesses. However, business-to-business services also reported a near-stalling of growth in December, recording the worst performance since March to signal a broader slowdown beyond the consumer sector.

Manufacturing growth meanwhile also remained subdued, constrained by widespread component shortages and a fourth consecutive monthly fall in export orders. Although the rate of factory output growth picked up marginally in December to the highest since August, aided in part by some signs of near-record supply chain delays starting to ease, it should be noted that the survey's output index is broadly consistent with stalled production as measured by official data.

The slowing pace of service sector growth and subdued manufacturing performance at the tail end of the year suggests the pace of economic growth will have slowed in the fourth quarter compared to the 1.3% quarterly expansion seen in the three months to September.

Service sector prospects for the year ahead meanwhile slipped to the darkest since October 2020 due to the growing virus worries, though signs of improving supply helped lift business expectations in the manufacturing sector to the highest since May. While suppliers' delivery times continued to lengthen at a rate far in excess of anything seen prior to the pandemic, the incidence of delays was the lowest so far this year.

Inflationary pressures meanwhile cooled during the month, albeit remaining elevated, attributable to the combination of the easing supply situation and weaker demand growth. Nevertheless, although down from November's record rate, the overall rate of input cost inflation measured in December was still the third highest in more than two-decades of survey history, with average prices charged for goods and services also rising at a rate unprecedented prior to September. 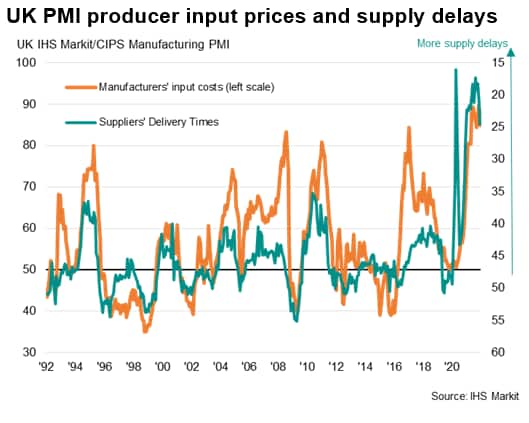 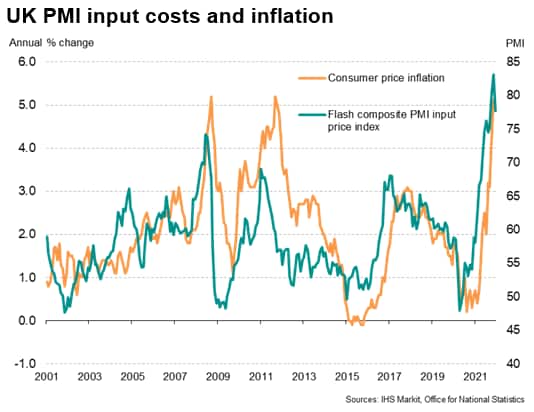 Hence, while inflationary pressures may have moderated in December, the rate at which both costs and prices are rising remains consistent with persistent strong inflation, albeit with a peak having been tentatively signalled.

The latest official data show consumer price inflation rising to 5.1%, a breaching of the 5% level that the PMI data had signalled ahead back in October. The latest PMI data are merely indicative of the headline inflation rate falling to just under 5%.

The flash PMI data will add to calls for the Bank of England to step away from hiking interest rates until the path of the Omicron variant and the ensuing impact on the economy are clearer. Already, the pace of growth signalled by the flash PMI's output index has fallen into territory which would be usually associated with a looser policy bias. 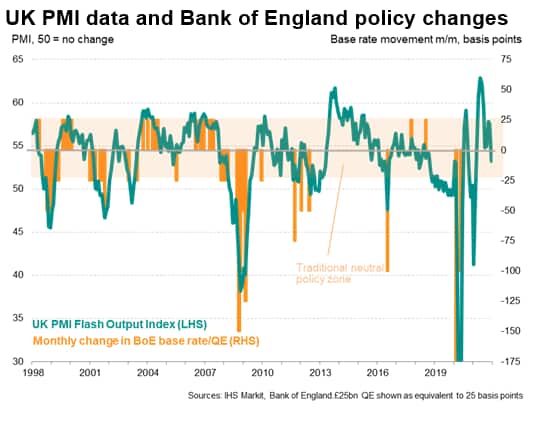 With the Omicron variant widely projected to cause a further sharp rise in the infection rate as we head into the New Year, and new social distancing restrictions already in place, the risk is tilted towards the pace of UK economic growth slowing further in the opening months of 2022.

As for inflation, there will be several factors to watch in order to assess whether price pressures will continue to moderate.

First, any switch of spending away from services to goods as social distancing limits hospitality activity could drive up demand for goods and push prices higher again.

Second, global supply chains could suffer another shock, as most recently witnessed when the Delta wave hit factories in Asia, causing production and exports of components to fall sharply.

Third, if the spread of the virus drives down labour market participation, wage growth could rise.

While higher vaccination rates mean the impact of any Omicron wave on the global economy is likely to prove less severe than prior waves, there remain many unknowns about the efficacy of vaccines and the severity of the variant, meaning the risks are clearly skewed towards slower growth and stickier inflation.