With an upcoming general election adding to Brexit-related uncertainty about the outlook, it was no surprise to see UK businesses report falling output and orders in November. Provisional data from the newly launched UK flash PMI release showed the combined output of manufacturing and services dropping to a degree not seen since April 2009 with the sole exception of the one-month decline recorded in the immediate aftermath of the referendum in 2016. New orders also showed the second-largest fall since the global financial crisis in March 2009, led by falling exports.

The decline adds to what's been the survey's worst spell since the recession of 2008-9 in recent months, and pushes the headline PMI composite output numbers further into territory that would normally be associated with the Bank of England adding more stimulus to the economy.

Further job losses were also reported during the month as companies cut operating capacity in line with the worsening sales trend.

The headline flash IHS Markit/CIPS Composite PMI - a GDP-weighted average of the output indicators from the manufacturing and services surveys - fell from 50.0 in October to 48.5 in November. The weak November reading, following stagnation in October, puts the economy on course for its worst quarter since the opening three months of 2009, historically consistent with a 0.2% quarterly rate of decline in GDP (assuming no change in the performance of the construction sector in November).

November's flash release was the first in a new regular schedule of UK PMI releases to accompany existing flash PMIs for the US, eurozone, Japan and Australia. The flash readings are based on approximately 85% of usual replies received each month and are designed to provide an accurate indication of the final data. Analysis shows the flash UK output index varies on average just 0.6 index points from the final readings (ignoring +/- sign). 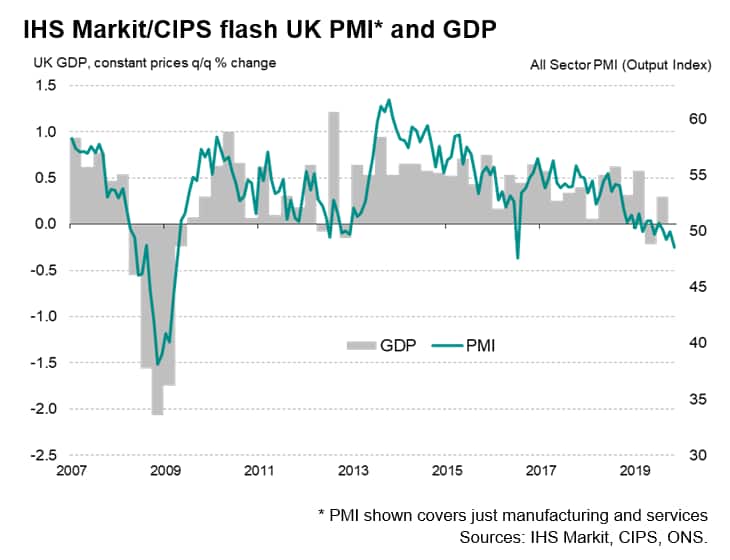 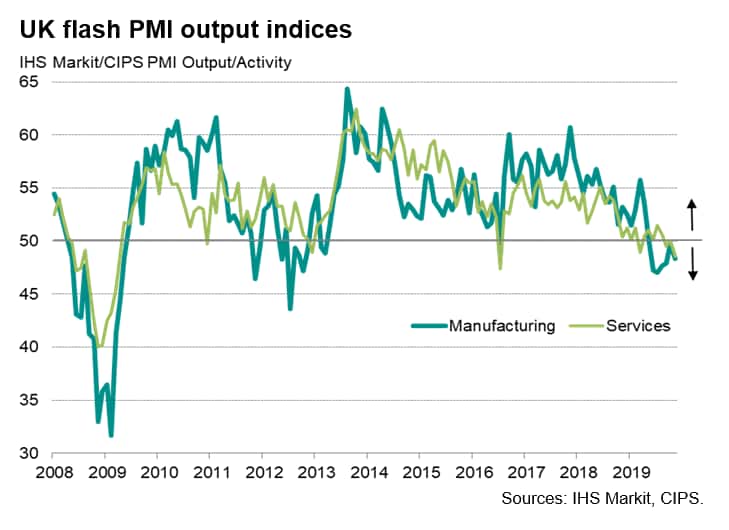 Falling output of goods and services

Manufacturing output fell for a sixth straight month in November, the production index dropping from 49.7 to 48.3, pulled down by a seventh successive monthly decline in new order inflows. New export orders for goods fell especially sharply, often blamed on falling demand from EU customers. With the exception of the decline seen in August, the latest drop in goods exports was the steepest seen for seven years.

Service sector output also fell, down for the second time in three months after stabilising in October. The business activity index slipped from 50.0 to 48.6. The last three months have seen the worst spell for service sector activity since early-2009, linked in turn to a third straight month of falling orders. The decline in service sector new orders was the second-quickest for over ten years in November.

Anecdotal evidence collected alongside the survey responses highlighted how the manufacturing decline in particular partly reflected a cooling of demand after no-deal Brexit stockpiling in October (inventories of both finished goods and inputs fell markedly after having risen in October). But companies in both sectors also commonly reported that demand and investment had suffered once again as a result of Brexit-related uncertainty, exacerbated by further indecision by customers ahead of the general election. However, weak demand was by no means exclusively blamed on Brexit, with softer sales in key export markets in particular linked to slower economic growth.

Encouragingly, business optimism about growth in the year ahead steadied in November, remaining higher than the lows seen in August and September albeit well down on recent highs, reflecting the heightened uncertainty facing businesses and gloomier economic projections.

Employment fell for a third successive month as firms cut headcounts in the face of weaker sales and the uncertain outlook. The pace of decline was modest, however, with the rate of job losses easing notably in the service sector. The average pace of job shedding in the last three months has nevertheless been the steepest since the start of 2010. Moreover, with companies reporting the quickest fall in backlogs of work for over seven years during November, the development of excess capacity means job losses could pick up again unless new order inflows revive. 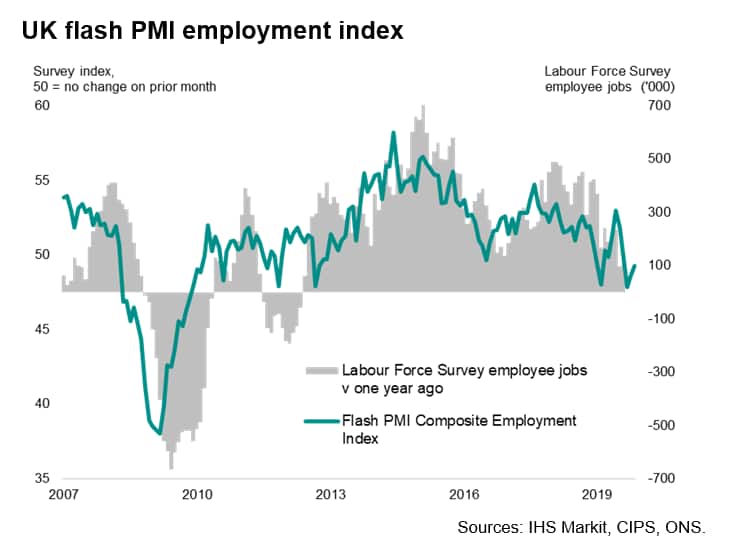 Average prices charged for goods and services meanwhile rose to the greatest extent in four months, despite input costs increasing at the slowest rate since June 2016. However, the uplift in selling price inflation was limited to the service sector, in part due to the need to pass on higher wage growth. In contrast, average prices charged for goods barely rose, registering the slowest increase since May 2016, as firms increasingly offered discounts in an attempt to stimulate sales.

The PMI surveys have diverged from GDP in recent quarters, with the latter showing considerably greater volatility than the survey data. Much of this volatility in the GDP numbers appears to have resulted from Brexit-related factors, such as stock-building and car sector factory closures ( read more about this divergence with the survey data here). Using a moving-average of the GDP data to iron out some of this volatility, the official data and survey data show similar trends of growth slowing markedly so far this year. On average, GDP has now fallen by 0.1% in each of the latest six months for which data are available (to September), which compares with an average 0.2% rise in the same period a year ago. Moreover, although GDP rose 0.3% in the third quarter, declines were recorded in both August and September.

The volatility of GDP so far this year and the uncertainty created by Brexit has made monetary policymaking especially difficult. The Bank of England has staked its bets on the economy rebounding robustly once anything but a hard Brexit is in place, notably via a surge in pent-up investment spending, and hence leaving policy on hold until the fog clears. Although policymakers have become recently split on whether to cut rates, the latest policy gathering saw the majority on the MPC seeing no need for any imminent rate cuts. However, the PMI surveys are not only warning that the underlying trend in the economy is deteriorating markedly, but also that the labour market is also cooling, which has the potential to feed through to weaker consumer spending and slower wage growth, thereby undermining two of the key supports to the economy in recent months. 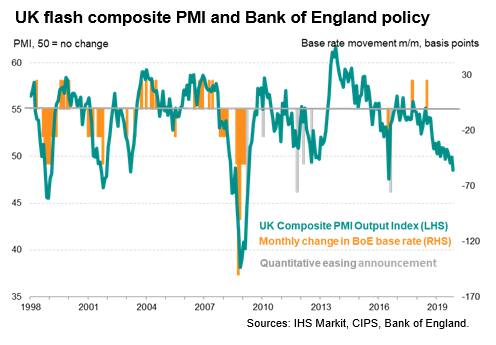 With output and labour market trends deteriorating at such a rate as signalled by the surveys, the big question will be just how long the Bank of England will hold its nerve in keeping policy unchanged.