A combination of sustained buoyant UK business growth, further job market gains and record inflationary pressures gives a green light for interest rates to rise when the Bank of England meets in December.

Output growth across manufacturing and services measured by the PMI surveys came in slightly faster than expected in November. The IHS Markit/CIPS composite PMI output index registered 57.7 according to the preliminary 'flash' reading, down from 57.8 in October but remaining well above the 50.0 neutral level to indicate a robust expansion of the economy. The latest reading was above the consensus of a slightly stronger pull-back to 57.5.

The data mean the fourth quarter should see a welcome pick up in GDP growth after the slowdown to 1.3% seen in the third quarter. At 57.8, the average reading for the fourth quarter so far is already running higher than the mean of 56.3 registered in the three months to September, and an acceleration of new business inflows recorded by the November flash surveys adds to signs that output growth should remaining buoyant in December, thereby cementing the strong end to the year. 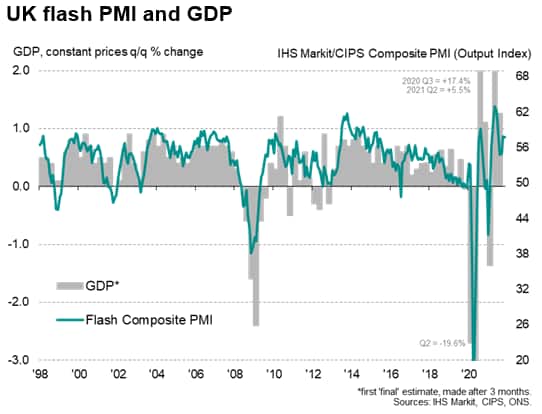 The news was by no means all positive, notably with growth once again heavily skewed towards the service sector. Solid service sector growth that far exceeded the pre-pandemic long-run average contrasted with only modest production growth in the manufacturing sector. The rate at which production expanded was the third lowest since February, albeit up slightly on October's low. 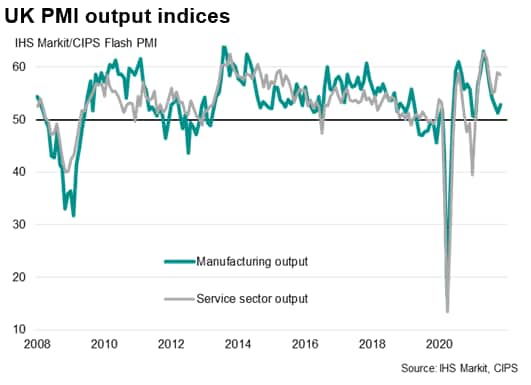 The service sector continued to benefit from the opening up of the economy, with no new COVID-19 restrictions applied and recent weeks having seen a loosening of international travel restrictions, which helped drive the strongest growth in service sector exports for over three years. However, concerns over high COVID-19 case numbers were cited as a dampener on activity in some firms.

Factories in contrast continued to struggle with supply shortages and falling exports, the latter now having fallen for three successive months. An especially steep drop in exports was seen for food and drink products, though declines were also recorded for automotive and electronic/electronic goods as well as chemicals, plastics and basic metal goods. 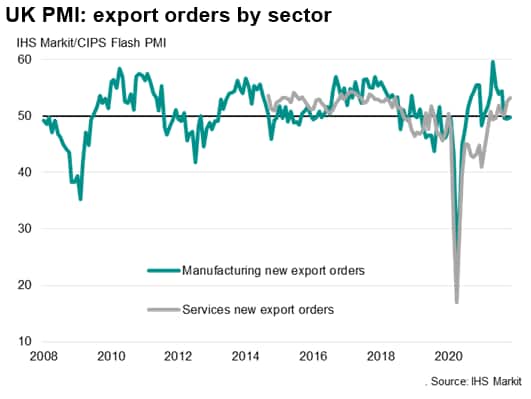 Supply shortages remained widespread, with suppliers' delivery times lengthening at a rate once again far exceeding anything recorded prior to the pandemic, albeit with the incidence of delays easing in November to the lowest since July.

The ongoing sellers' market created by the supply constraints alongside solid demand for materials led to another unprecedented rise in price pressures, with costs in both manufacturing and services rising at the steepest rates since comparable data were first available in January 1998. 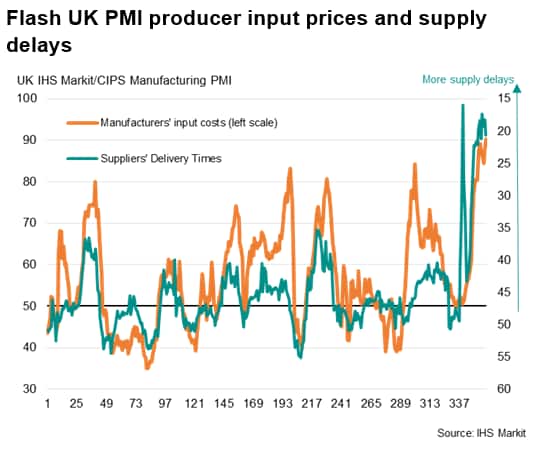 The record increase in firms' costs will further stoke fears that inflation, as measured by the consumer prices index, will soon breach 5% (having already surged to a decade-high of 4.2% in October), with the lingering near-record supply delays adding to indications that price rises may show few signs of abating in the near-term. 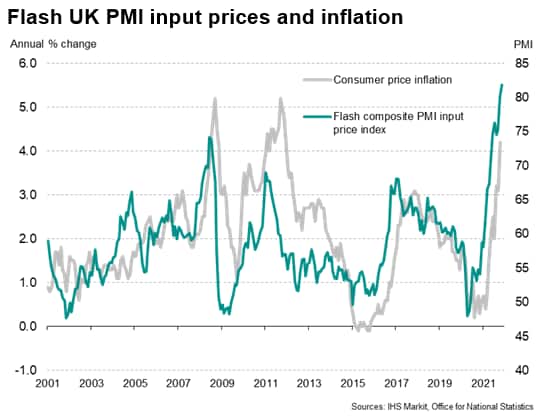 Employment meanwhile rose for the ninth successive month in November, according to the flash PMI data, rising at the slowest rate since April yet remaining far above the survey's long-run average. Firms continued to hire staff to meet rising demand and help reduce backlogs of work that continued to accumulate in November. Jobs growth remained robust in both manufacturing and services. 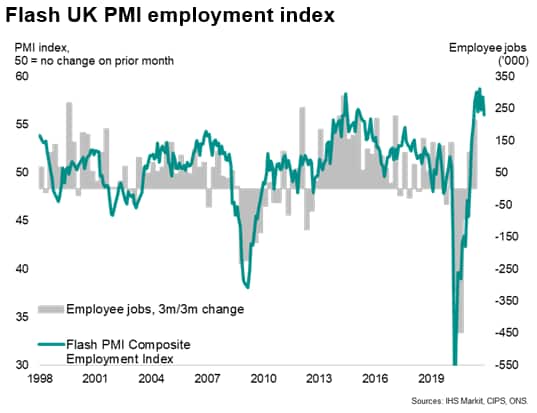 Rate hike at the Bank of England

For policymakers concerned about the health of the labour market after the end of the government's furlough scheme, the buoyant jobs growth signalled by the November survey should bring some reassuring comfort.

The relatively poor performance of manufacturing is likely to remain a concern for some time, however, as is the potential to see tighter growth-inhibiting COVID-19 restrictions applied amid high COVID-19 case numbers both at home and now also in continental Europe. The latest survey results will none the less likely shorten the odds of an interest rate hike at the Bank of England's Monetary Policy Committee meeting in December. 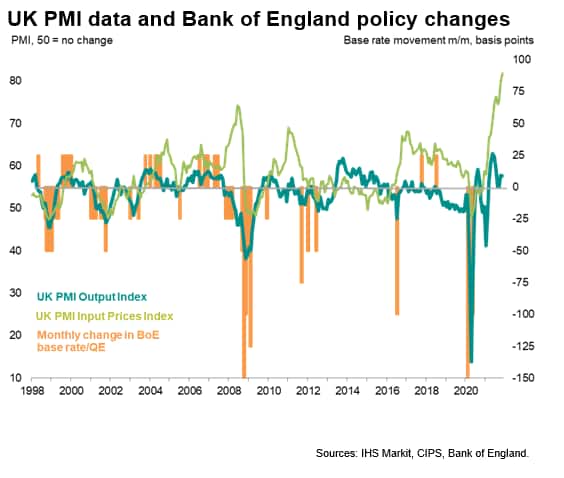