The UK's economic recovery lost momentum for a second successive month in October, with companies reporting a renewed decline in demand as new orders fell for the first time since June. The flash IHS Markit/CIPS composite PMI, based on around 80% of normal replies received from the monthly surveys, slumped from 56.5 in September to 52.9 in October, a four-month low. Markets had been expecting a reading of 53.9, according to Reuters.

Despite the decline, the PMI's composite output index remains at a level historically consistent with GDP expanding at a quarterly rate of approximately 0.3% at the start of the fourth quarter, but the deterioration in new orders hints at the rate of expansion weakening further in November, especially as fresh lockdown measures to prevent the spread of COVID-19 are likely to impact growing numbers of companies in coming weeks.

Fourth quarter GDP growth consequently looks likely to be far weaker than the strong rebound seen in the third quarter, when the PMI averaged 57.5. 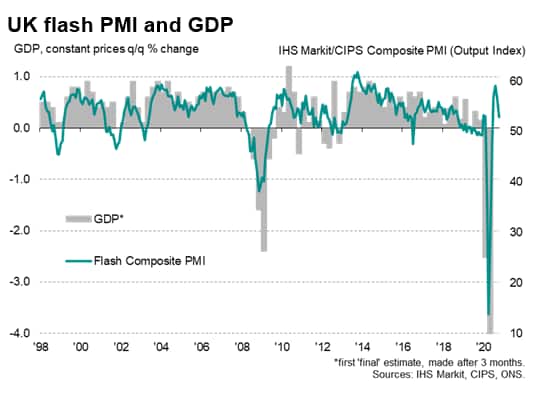 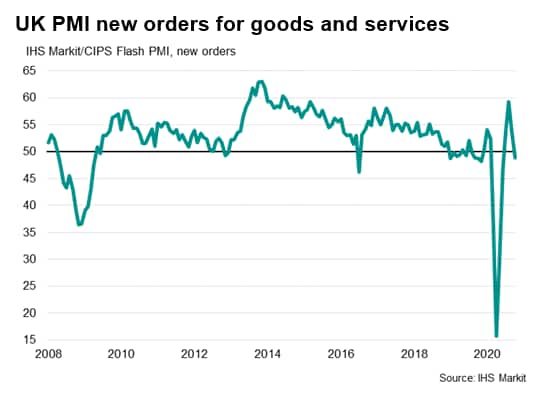 The slowdown was led by the service sector, where growth of business activity fell sharply compared to that seen in the prior three months and new business inflows contracted for the first time in four months. Activity in the restaurants & hotels sector fell especially sharply for a second month running, slumping to an extent not seen since May due to the ending of the government's Eat Out to Help Out scheme and growing restrictions on recreational activities, including enforced early evening closures of bars and restaurants and tightened local lockdowns in some parts of the country.

Encouragingly, robust growth continued to be recorded for business-to-business services, IT & computing and financial services. 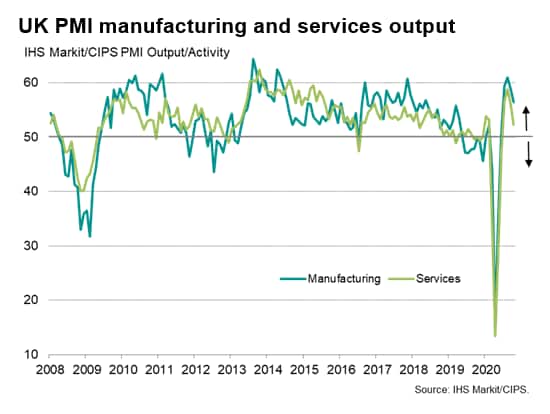 Although manufacturing also continued to fare well, the rate of growth of factory output and new orders slipped to the weakest seen over the past four months. The weakened growth occurred despite producers reporting strengthening demand for exports ahead of the Brexit deadline at the end of the year, hinting at sluggish domestic demand conditions. 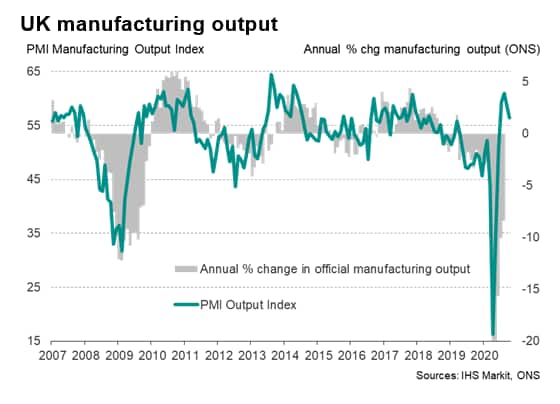 New export orders rose to the greatest extent since February 2018, although one-in-four companies citing a reason for the improvement directly attributed the increase to the advance buying of safety stocks by overseas customers ahead of Brexit day on 31st December. However, the increase in exports was largely confined to food & drink, mechanical engineering products and basic metal goods, the latter comprising mainly inputs sold to other manufacturers. 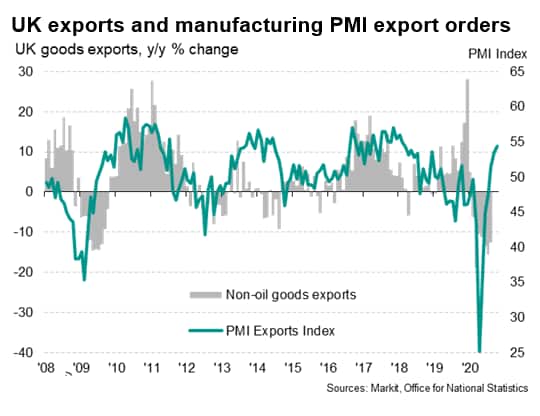 A rising number of manufacturers meanwhile reported that worries over Brexit led to increased stock piling of inputs. One-in-three companies that reported higher input inventories cited Brexit as the cause. However, overall stock levels continued to fall as many other companies reported the need to reduce inventory holdings for cost and cash flow considerations. 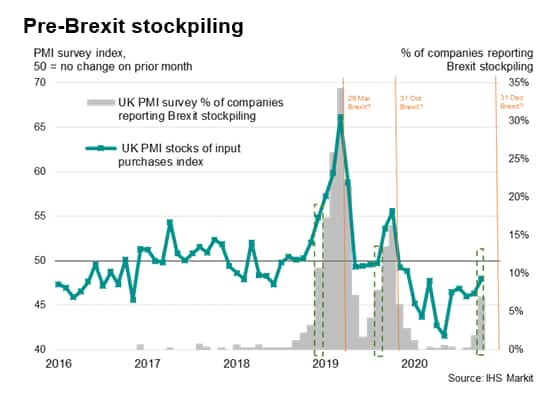 The renewed drop in inflows of orders meant backlogs of work likewise fell, having briefly returned to growth in September. Falling backlogs of work are usually a sign of excess capacity, so it was no surprise to see employment levels cut once again in October. Although the rate of job cutting eased slightly, down to the lowest since March, the incidence of job losses remains higher than at any time prior to the pandemic since the global financial crisis.

Service sector jobs were cut particularly aggressively, albeit to the least extent since March, though manufacturers reported a renewed acceleration in job losses.

Job cuts were primarily blamed on the need for redundancies resulting from COVID-19. 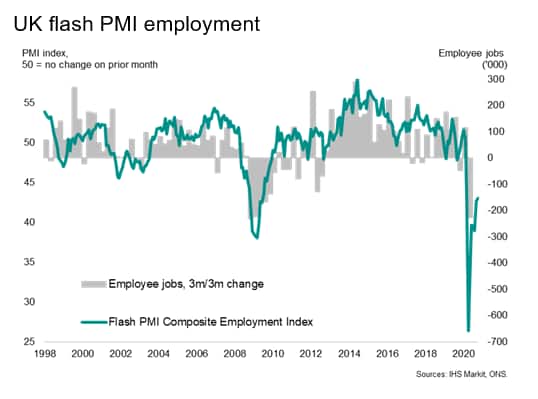 A lack of demand was often cited as a cause of low pricing power, and the October survey saw average prices charged for goods and services broadly unchanged during the month, declining very marginally. However, although charges levied for services fell for a second successive month, prices charged for goods rose at the fastest rate seen for ten months with raw material input prices rising to an extent not seen since November 2018. The increase in raw material prices hints at rising underlying inflationary pressures for goods, and was often linked to supply shortages. Supplier delivery times lengthened markedly during the month as shortages for many inputs persisted.

The slower growth of output, the renewed fall in demand and further deterioration in the labour market suggest the economy started the fourth quarter on a weakened footing. While Brexit preparations may cause a short-term boost to the economy ahead of 31st December, rising COVID-19 cases and the imposition of local lockdown measures bode ill for the near-term economic outlook. While the fourth quarter still looks likely to see the economy expand, the risk of a renewed downturn has risen. 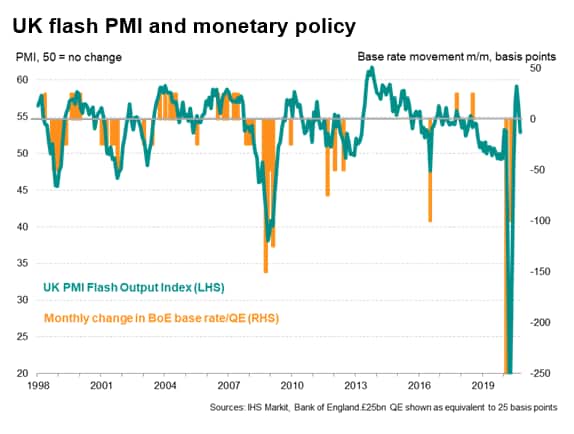