An easing of COVID-19 containment measures in April helped drive the pace of UK economic growth to the best for almost seven and a half years, according to the latest flash PMI data from IHS Markit and CIPS. Jobs growth also accelerated to one of the fastest rates seen over the past six years, as future expectations remained close to March's all-time high. But rising prices are a concern, and export growth remained lacklustre compared to recent trends seen in many other countries.

The headline PMI covering both manufacturing and services rose from 56.4 in March to 60.0 in April, well above expectations of a rise to 58.2. In more than 23 years of PMI history, there has been one spell of faster growth, recorded between August and November 2013. 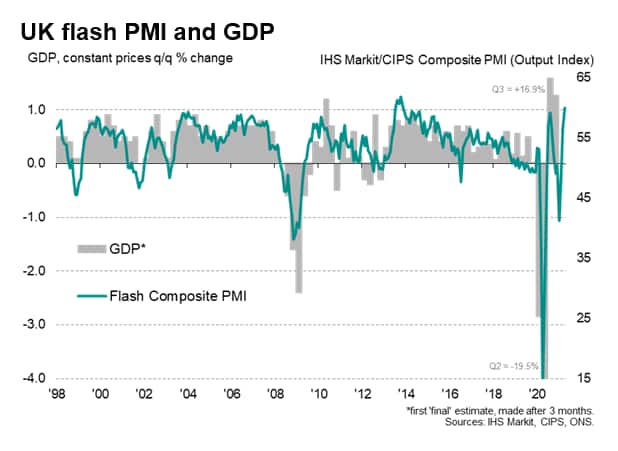 Companies are reporting a surge in demand for both goods and services as the economy opens up from lockdowns and the encouraging vaccine roll-out adds to a brighter outlook. Service activity expanded to the greatest extent since August 2014, while manufacturing production growth accelerated to its fastest for eight months. 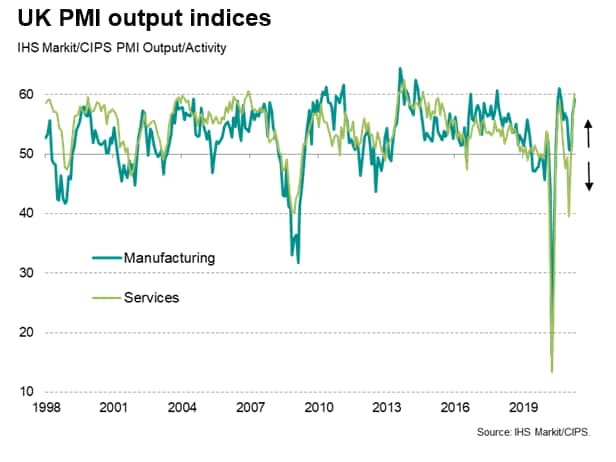 Business activity should continue to grow strongly in May and June as lockdown measures are eased further, setting the scene for a bumper second quarter for the economy. 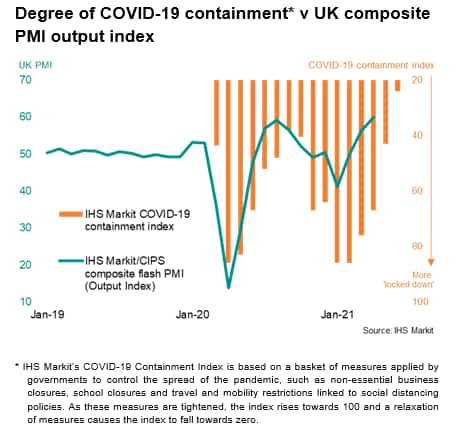 Manufacturing trends varied by sector. Best performing was the mechanical engineering sector, linked in part to strong exports, followed by food and drink, despite the latter seeing a marked fall in exports. Especially robust output growth was also recorded for electrical & electronic goods, basic metals goods and chemicals & plastics. Transport (vehicle) producers stood alone in reporting a decline in both production and employment during the month, also reporting a sharp drop in exports, while textiles and clothing manufacturers were notable in reporting only modest growth.

Supply delays were broad based across manufacturing, however, running at near-record levels, but were especially acute in the vehicle manufacturing, electrical & electronics and basic metal industries. 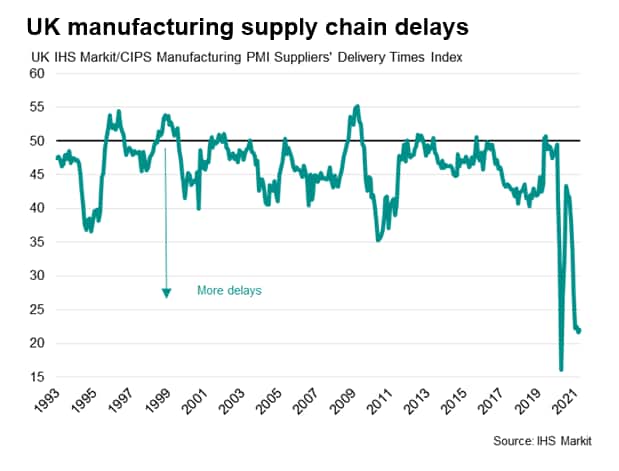 Although current activity remained subdued in hotels & restaurants, it was a different story for new business inflows into the sector, which jumped to the highest since last August.

While exports returned to growth after three months of decline, the rate of increase remained relatively subdued compared both to domestic orders and export trends seen in many other economies, often linked to post-Brexit trading conditions.

German goods exports, most notably, have been running at a record high in recent months, according to PMI data, leading to the fastest growth of eurozone goods exports on record in March and April, albeit the rate of increase slipping slightly in April due in part to heightened lockdown measures across Europe. 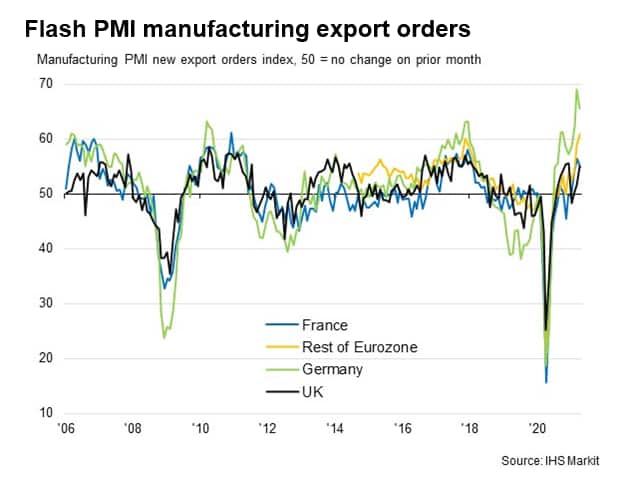 Prices charged for goods rise at steepest rate for a decade

Prices were a second cause for concern. Input costs rose at a rate not seen for over four years, leading to another sharp rise in average prices charged for goods and services. Prices charged at the factory gate for goods jumped especially markedly, rising at a rate not seen for a decade. Companies linked increased prices to higher global prices for many goods, often due to supply shortages, as well as rising import costs linked to Brexit. 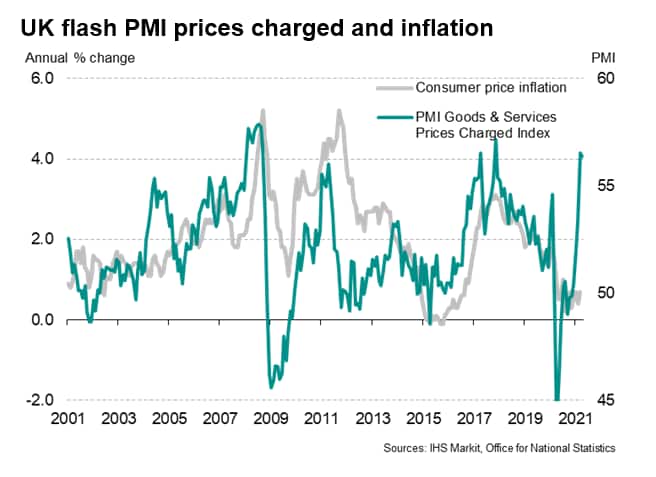 Hiring on the rise

Better news came from the job market numbers, with the survey highlighting how the upturn is feeding through to higher employment. With optimism about the year ahead continuing to run close to March's all-time high, firms have been encouraged to take on extra staff at a rate not seen for over three and a half years.