A rise in the headline flash UK manufacturing PMI masked a deterioration in the rate of growth of output in October. Although widely attributed to near-record supply delays and staff shortages, the worsening production trend could also be linked to a downshifting of demand growth since the summer, in turn caused partly by an increasing loss of export orders.

The October flash PMI data for the UK provided a reminder of how looking at the headline numbers can mask important details in the survey's sub-indices.

The IHS Markit/CIPS flash manufacturing PMI rose to 57.7 in October from 57.1 in September. However, dig down into the components of the PMI and we can see worrying signals about the health of manufacturing in the UK.

First, the survey's output index - which measures the actual month on month change in the volume of goods that each factory produced each month - fell to 50.6 from 52.7 in September. Barring the pandemic-related lockdowns seen in the UK in the spring of 2020 and early 2021, this is the lowest output index reading since the start of 2020 and indicative of the official gauge of manufacturing production falling on a quarterly basis. 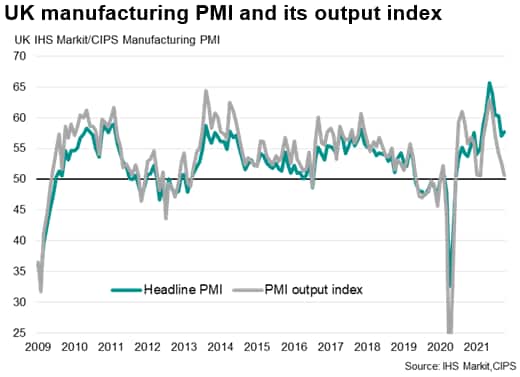 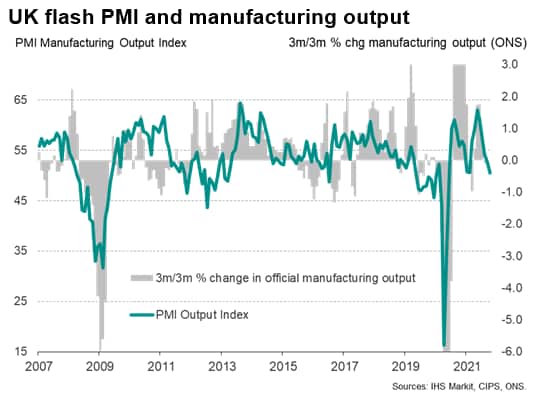 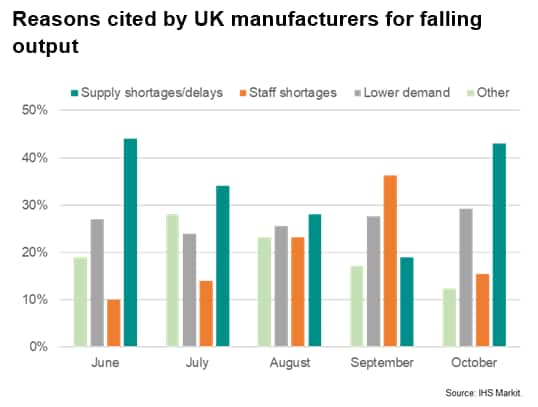 Drilling down into the reasons provided by those manufacturers who reported a fall in production during October, some 43% reported that output had been hit by shortages of components or supply chain delays. These shortages were highlighted by the survey's suppliers' delivery times index falling further in October, indicating the greatest lengthening of supply lines since the initial global factory closures seen at the start of the pandemic. Worst affected were food & drink producers and manufacturers of electrical and electronic goods. 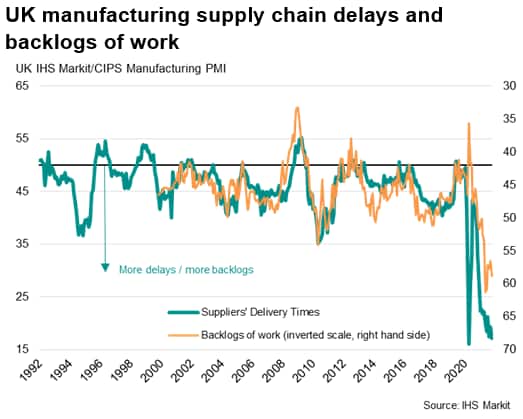 A further 15% of respondents reported that output had fallen due to staff shortages - linked either to illness, COVID-19 confinement or staff leaving.

Some comfort can be drawn from the fact that production should recover in these firms once these shortages have eased. Indeed, backlogs of work rose in October at the fastest rate since June, reflecting a further marked build-up of orders yet to be completed or even started. These rising backlogs help explain a slight upturn in firms' future output expectations.

But new orders and jobs growth has downshifted

However, more worryingly, almost one-in-three firms (some 29%) simply reported that their output had decreased due to weakened demand. Although the survey's new orders index picked up slightly during the month, it remained far below levels seen in the six months prior to September, suggesting the UK factory sector has seen a downshifting of demand growth since the summer.

Although some pull-back in spending on goods was to be expected as the service sector continues to open up from COVID-19 restrictions, this weakening of demand growth can also be linked to a second consecutive monthly fall in new export orders during October, which fell at the fastest rate since the January lockdown. Analysis of the reasons cited for falling export orders in October shows that one-in-three firms blamed Brexit. 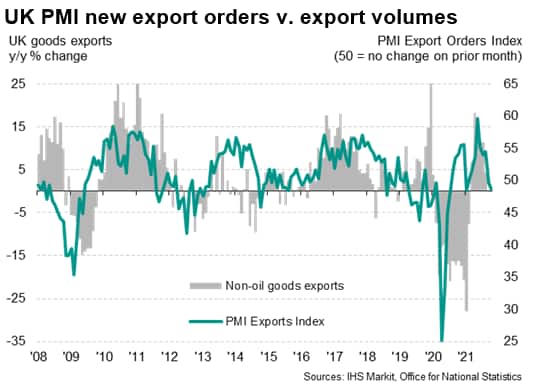 Note also that, although factory employment growth picked up in October according to the flash PMI, the latest increase in staffing levels was the second-slowest since February and - like new orders growth - was far weaker than the gains recorded during the summer. 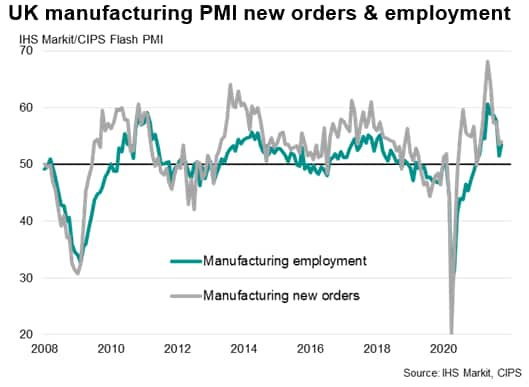 The October survey therefore underscores how the rise in the headline PMI has masked a deteriorating production trend, albeit one that should in part be reversed if current supply-side constraints can be lifted. However, the weakening inflows of new orders and scaling back of hiring in recent months suggest that the outlook for manufacturing has dimmed since the summer, which can be linked to a large degree on falling exports, which are in turn partly linked to Brexit-related factors.