The UK economy grew by more than expected in February, but survey data suggest the rate of expansion is set to weaken in coming months.

The economy expanded by 0.3% in the three months to February according to the initial estimate of gross domestic product from the Office for National Statistics, outpacing the signal from recent PMI surveys. However, the surveys suggest the underlying trend has weakened, posing downside risks to future growth. 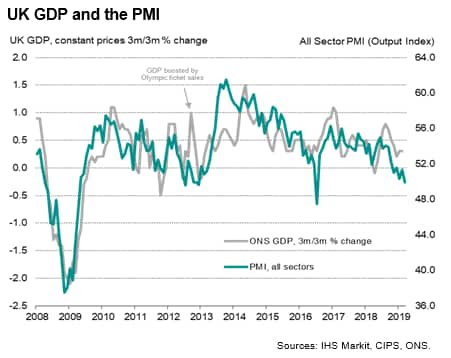 Construction industry output also rose at a robust pace, up 0.4% in February, but service sector growth meanwhile wilted to show a 0.1% increase in February after a more substantial 0.3% rise in the opening month of the year.

The surveys suggest that all three of these sectors may see growth weaken in coming months.

In relation to manufacturing, strong output gains had also been recorded by the IHS Markit/CIPS manufacturing PMI in recent months, but the upturn was linked to record stockpiling as firms prepared for a potentially disruptive 'no deal' Brexit. Roughly one in three PMI survey respondents that reported increased production in February linked the rise to such inventory building, rising to around half of all companies in March. Clearly these factory output gains look temporary and are likely to reverse once the need for stockpiling has faded. 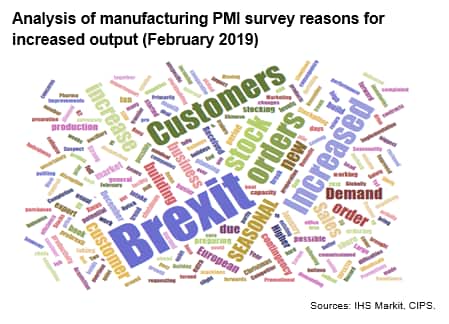 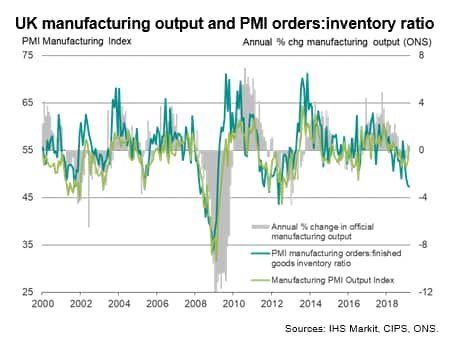 In construction, the recent monthly gains mask an underlying weakness in the building sector. The construction data used in the compilation of GDP are very volatile, and the smoother three-month-on-three-month rate of change indicates that the sector has in fact moved into decline, with output down 0.6% compared to the prior three months.

A contraction is also signalled by the construction PMI which, like the official data, has deteriorated markedly since peaking in the middle of last year. The caveat is that the survey showed both new work inflows and business expectations improving somewhat in March, suggesting the building sector may see some stabilisation in the second quarter. 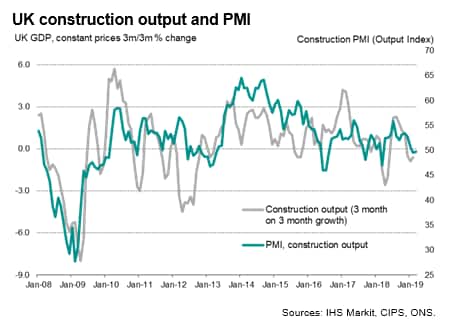 The picture is more complicated in the service sector due to differences in survey coverage, but delving into the official data shows some tentative corroboration of the recent weakness in the services PMI. The output index from the services PMI signalled modest growth in February but has since slipped into decline in March for the first time since 2012 with the exception of the month following the 2016 referendum.

The near-stagnation of the ONS measurement of service sector output to register just 0.1% growth in February is therefore in line with the survey's findings. A more upbeat picture is portrayed by the three-month on three-month growth trend in services, which eased from 0.5% to 0.4% (though still the weakest since May of last year). But looking at the composition of this growth, even here the trend starts to match that of the PMI more closely. A like-for-like comparison of the PMI's service sector coverage shows the contribution of services to quarterly GDP growth falling from a peak of 0.38% last July to just 0.15% in February, according to the official data. It's this contribution that the PMI indicates will fall further in coming months. 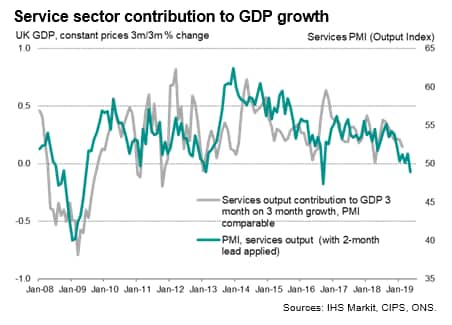 The retail sector, excluded from the PMI, remains a key support to the official picture of the economy, and is a key area of divergence between the GDP and PMI data. Strip out retail and the three-month GDP growth rate fell to just 0.2%, closer to the signal of 0.1% from the February PMI surveys. In either case, the rate of growth has clearly slowed markedly since last summer, with Brexit uncertainty the main culprit. Brexit developments will therefore form a key determinant of growth in coming months, with more evidence to be provided by the upcoming PMI surveys for April.