The latest official data show the UK economy is likely to avoid a recession, though a drop in GDP in August hints at a weakening trend going forward.

Official GDP data showed the economy contracted slightly in August, with GDP down 0.1% compared to July. Only the construction sector showed any growth, with a sharp decline in manufacturing and falling agriculture output accompanied by a stagnant service sector. However, the disappointing August numbers come on the heels of a stronger than previously thought July, leaving the economy on course to expand in the third quarter, barring any slump in September (GDP would need to fall by 1.5% in September to result in a third quarter decline, assuming no revisions to prior data). 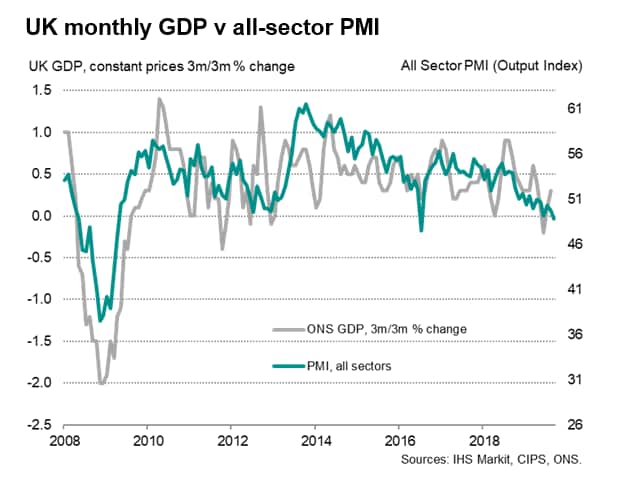 An upward revision to June's data also means the economy grew 0.3% in the latest three months, much faster than anticipated. However, we expect that the decline in August represents the start of a weaker growth spell going forward. The IHS Markit/CIPS 'all-sector' PMI fell to 48.8 in September, signalling the steepest decline in business activity since the referendum and the second-quickest reduction since April 2009. A broadening out of the downturn also meant that manufacturing, construction and services were all reported to now be in decline. 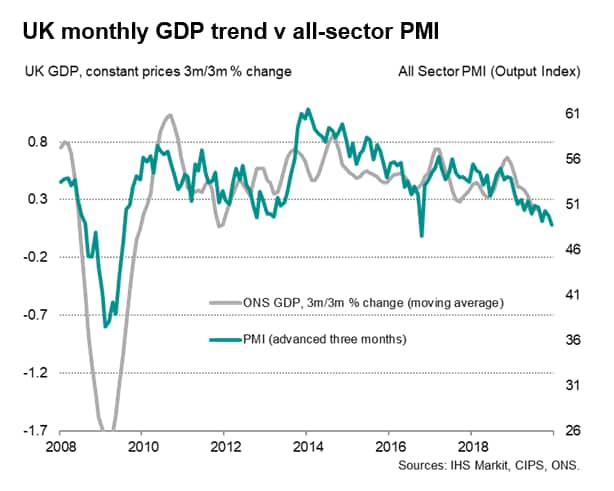 While the survey evidence highlight how Brexit-related factors continue to be blamed for undermining business activity and subduing optimism about prospects for the year ahead, the deteriorating UK picture also comes at a time of worsening global economic conditions. In particular, the latest data have brought signs of sharply slower growth in the US and a near-stalling of the eurozone, the latter led by a deepening downturn in Germany. The global PMI is currently indicating the joint-weakest expansion for three years.

While there's still a chance that we could see growth lift temporarily higher ahead of the October 31st Brexit date, as companies step up their no-deal preparations, the combination of slower global economic growth and intensifying Brexit uncertainty is a clear recipe for slower growth in coming months.

Our central projection is for the UK economy to expand by 1.0% in 2019 and just 0.5% in 2020. These growth projections assume a Brexit delay beyond 31st October and that the UK and EU will eventually achieve a comprehensive agreement on future relations. However, a no-deal Brexit would likely throw the UK into a prolonged recession.

Surveys and GDP diverge, though both trend lower

The official data have held up better than the business surveys so far in the third quarter, though this in part reflects a rebound in the official data from weakness earlier in the year (see chart). Restricting GDP to the same coverage as the PMI (excluding retail and government), the official data showed the three-month rate of change falling sharply negative in the second quarter (a 0.5% decline), falling much more than indicated by the PMI. A 0.3% rise in GDP in the latest three months therefore in part represents a recovery from this earlier decline. Taking a moving average of the GDP data to iron out some of the volatility, the trend in the official data clearly match the slowdown indicated by the surveys, with both now showing the weakest trends since the global financial crisis (with the sole exception of the PMI's slump in the immediate aftermath of the Brexit vote). 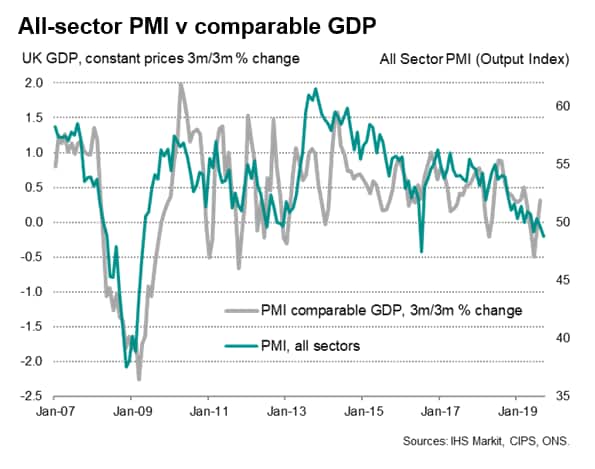 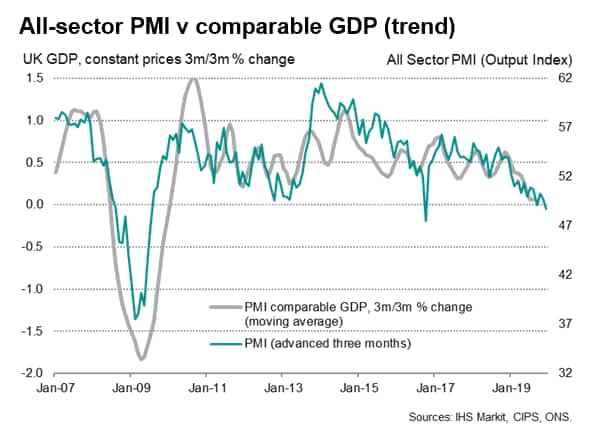