UK economic growth slowed to a crawl in July, registering the slowest expansion since the lockdowns of early-2021. Although not yet in decline, with pent-up demand for vehicles and consumer-oriented services such as travel and tourism helping to sustain growth in July, the PMI is now at a level consistent with just 0.2% GDP growth. Forward-looking indicators suggest worse is to come. Order books are now deteriorating for the first time in one and a half years as inflows of new work are insufficient to keep workforces busy, which is usually a precursor to output and jobs being cut in coming months. Raw material buying has already slumped and hiring has slowed as companies reassess their requirements for the coming months.

The concern is that rising interest rates, as the Bank of England seeks to control inflation, will cause demand growth to weaken further in the coming months. To be hiking interest rates at a time of such weak business growth is unprecedented over the past quarter-century of survey history.

On a brighter note, inflationary pressures have cooled markedly, stemming from fewer supply shortages and more discounting in response to the weakened demand environment. Companies' costs are growing at the slowest rate since last September, which should help alleviate some of the upward pressures on inflation from energy and food in the coming months. 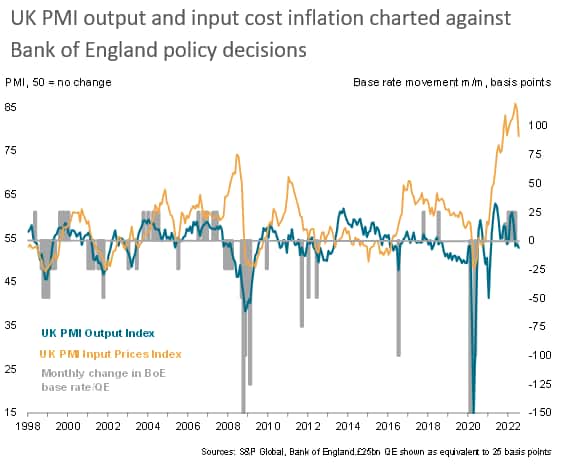 Business activity at UK private sector companies increased for the seventeenth month running in July, but the rate of expansion was the weakest over this period. The headline seasonally adjusted S&P Global / CIPS Flash UK Composite Output Index registered 52.8 in July, down from 53.7 in June and the lowest reading since the pandemic lockdowns of February 2021. 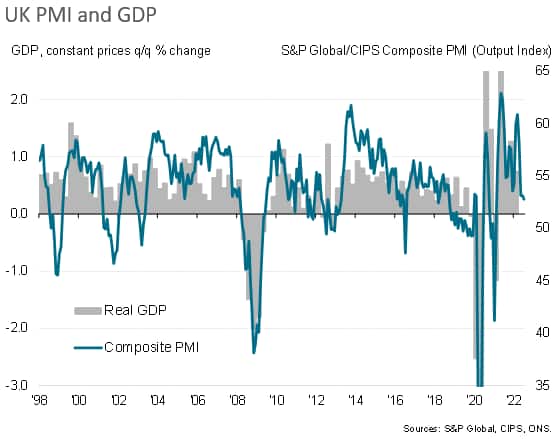 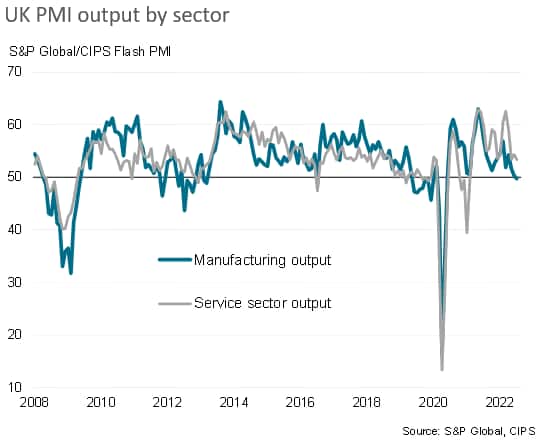 Sector data illustrated that service providers continued to outperform in July, although the latest output expansion was the weakest for 17 months. Companies reported that the resurgence of consumer demand for services since the pandemic lockdowns has started to cool, in part reflecting the rising cost of living, while at the same time demand growth for industrial and other corporate services has weakened considerably in recent months amid growing concerns about the economic outlook.

New order volumes increased moderately in July, driven by a sustained rise in new work across the service economy - notably from consumer spending on travel and leisure services. However, manufacturers reported a further reduction in sales volumes, the rate of decline of which accelerated to a two-year high.

Measured overall, new orders growth remained among the weakest seen over the pandemic excluding lockdown months, which in turn led to the first fall in backlogs of work since February 2021. Note that falling backlogs of work typically lead to companies reassessing their operating capacity needs, meaning downside risks to both output and employment in the coming months unless new order inflows revive. 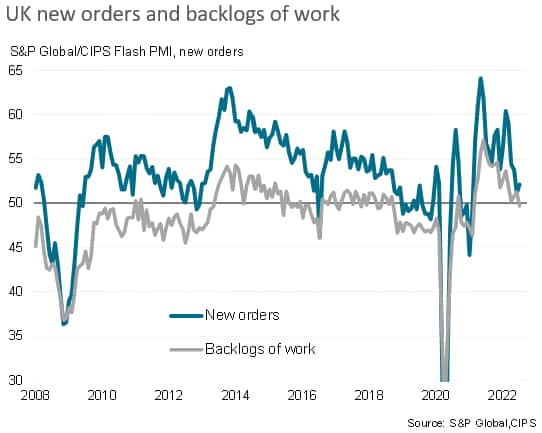 The near-term outlook for manufacturing looks particularly worrying, as a dearth of new orders has coincided with a build-up of unsold stock due to weak customer demand. This in turn, via the survey's new-orders-to-inventory ratio, points to sharply weaker output growth in the coming months. This ratio is now at one of its lowest levels since the global financial crisis. 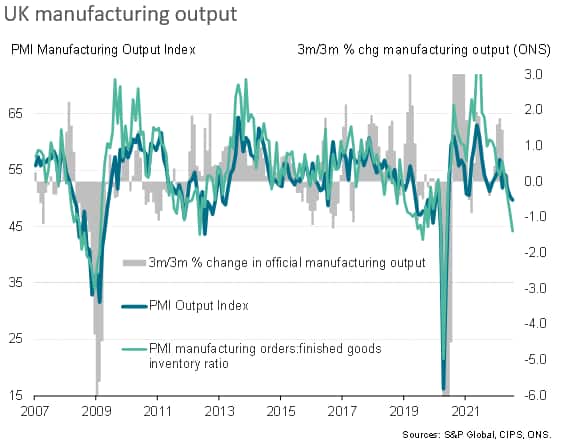 There was better news on inflation. Input cost inflation across both manufacturing and services moderated for a second month running, with the seasonally adjusted index dropping sharply from 84.5 in June to 78.3 in July. This signalled the slowest rate of input cost inflation since September 2021. Manufacturers recorded a particularly marked easing in cost pressures to the lowest for 18 months. Survey respondents suggested that lower commodity prices had started to alleviate pressures on raw material costs (especially metals), but service providers noted that intense wage pressures due to shortages of staff and rising consumer price inflation had continued to push up their cost burdens.

Mirroring the trend for input costs, July data pointed to a further slowdown in prices charged inflation. The latest rise in output charges was the least marked since January, reflecting some efforts to moderate price increases in the wake of softer customer demand. 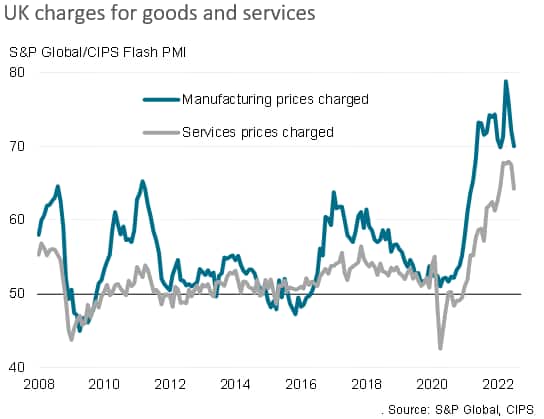 Looking ahead, the easing in the PMI's cost gauges bodes well for taking some of the heat out of inflation in the coming months. The concern is, however, that rising energy bills are likely to bring more pain to UK households in the autumn. 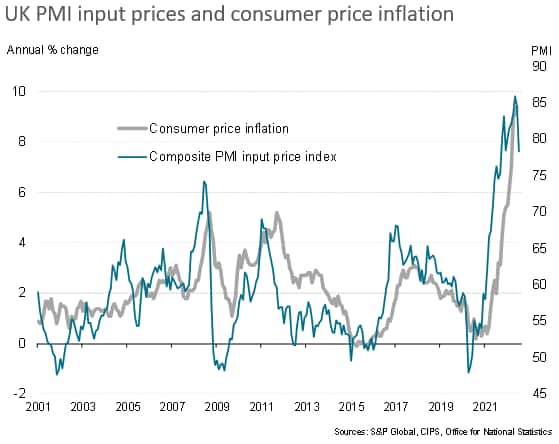