The latest data reveal an economy in decline and skirting with recession as headwinds from slower global economic growth are exacerbated by Brexit-related paralysis. The Bank of England has retained its tightening bias, but any continued economic weakness will mean policymakers are likely to take an increasingly dovish stance.

Official GDP data showed the economy contracted for the first time since 2012 in the second quarter, and survey data for July provide scant hope for anything better than stagnation in the third quarter. 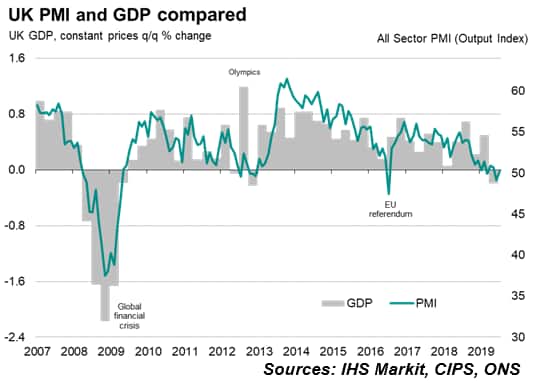 A worse-than-expected 0.2% decline in GDP in the three months to June confirms that the strong start to the year was merely an illusion of well-being, with first quarter growth of 0.5% having been buoyed by Brexit-related stockpiling. Such inventory building moved into reverse in the second quarter, hitting manufacturing, and was accompanied by sharply deteriorating demand for construction projects and a weakening service sector.

The slight drop in GDP had been signalled in advance by the PMI surveys, which have since indicated that the economy remained in the doldrums in July. Although the all-sector PMI rose slightly in July, the reading was consistent with flat GDP.

While companies responding to the surveys often reported Brexit-related uncertainty to have curbed sales and deterred investment, the roots of the problems are not all home grown. Slower international economic growth has clearly also had an increasing impact in recent months. Global survey data have signalled the weakest pace of worldwide economic growth for three years in recent months, led lower by manufacturing turning down at the sharpest rate since 2012 as trade war worries intensified.

The eurozone, the UK's largest trading partner, has been especially hard-hit, though US growth has also weakened significantly in recent months.

Given the backdrop of slower global economic growth and heightened Brexit uncertainty, the UK economy looks set to struggle in coming months. There's a chance that we could see growth lift higher amid no-deal Brexit planning as we head towards October 31st, but the headwinds in the wider economic environment mean any such boost is likely to prove all too brief.

In terms of the implications for policy, Ken Wattret, Chief European Economist at IHS Markit, notes that:

"The Bank of England's reiteration at the start of August that an 'ongoing tightening of monetary policy would be required' is increasingly out of kilter with economic reality. With domestic and external headwinds blowing more forcefully, market consensus growth expectations for 2020 are also looking increasingly delusional. We currently forecast 0.8% UK growth next year, half a percentage point below consensus and the lowest since 2009 by some margin, with a further downward revision likely if the data continue to disappoint.

"Even if the UK pulls back from the "no deal" cliff-edge, which is far from guaranteed, Brexit-related uncertainty will continue to weigh heavily on the economy. Moreover, beyond the UK's borders, the clouds are also darkening, pushing central banks across the globe into easing mode. Absent a dramatic turn of events, the pressure will continue to build on the Bank of England to join them. The Bank of England may take the view that soft sterling is doing the easing for them. But we know from the post-referendum slump that the damage to household real incomes from the inflationary boost can also choke off consumer spending growth."

Households supporting the economy, for now, as investment slumps

Looking in more detail, the GDP data from the Office for National Statistics showed manufacturing output running 2.3% below the first quarter, dropping at the sharpest rate since the height of the global financial crisis in 2009, while construction output was down 1.3%. The service sector continued to support the economy, but output was up just 0.1% on the first quarter (the joint-weakest performance since early-2010). 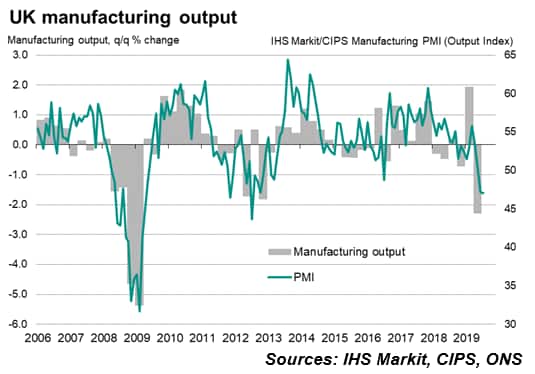 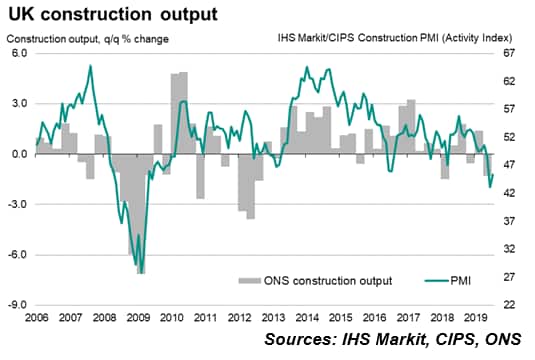 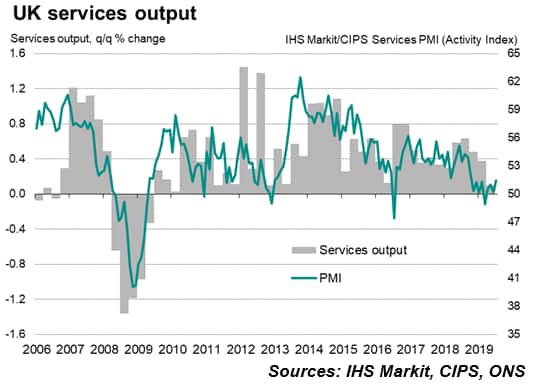 The main source of growth appears to be households, where spending rose 0.5%, with consumers benefitting from low interest rates and a strong job market, though even the latter appears to be turning down. Recent data from recruitment agencies reported that the number of people placed in new jobs fell for a fifth straight month in July, and that wage growth slowed to the weakest for over two years. We will know more about the labour market next week.

Perhaps of greatest concern is the decline in business investment, which fell 0.5% in the three months to June and indicates that companies are reluctant to inject money into expansion and new product development amid the ongoing uncertain economic and political climate. The longer the investment decline persists, the deeper the damage done to the UK's longer-term growth potential.