The UK economy is on course to contract sharply in the first quarter of 2021 as the country struggles through a third national lockdown, meaning a double-dip recession is on the cards. Services have once again been especially hard hit, but manufacturing has seen growth almost stall, blamed on a cocktail of coronavirus disease 2019 (COVID-19) and Brexit, which have led to increasingly widespread supply delays, rising costs and falling exports.

Encouragingly, the current downturn looks far less severe than that seen during the first national lockdown, and businesses have become increasingly optimistic about the outlook, thanks mainly to progress in rolling out COVID-19 vaccines. Business hopes for the year ahead have risen to the highest for over six and a half years, boding well for the economy to return to solid growth once virus restrictions ease. 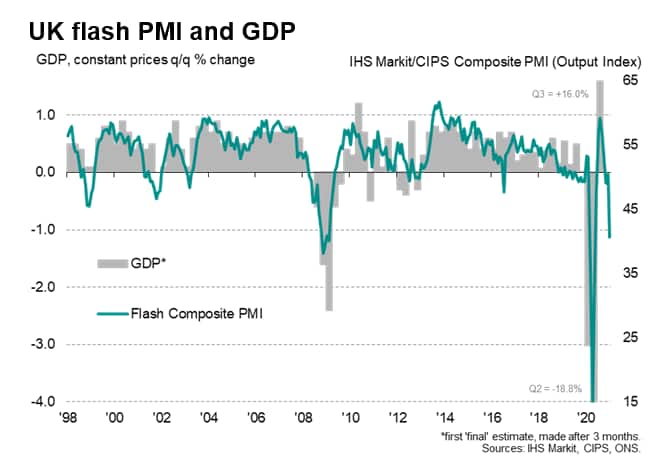 The headline index from the survey, the seasonally adjusted IHS Markit/CIPS Flash UK Composite PMI - based on approximately 85% of usual monthly replies, slumped from 50.4 in December to 40.6 in January, its lowest since May of last year and falling below the 50.0 no-change mark to indicate a renewed, steep, contraction of business activity. With the exception of the March through to May period of last year, the latest reading was the lowest since February 2009.

The fall in the headline output index was accompanied by a similar sharp drop in new orders, which deteriorated in January at the fastest rate since last May, and also prompted firms to cut jobs at an increased rate. The pace of job losses had eased in December to the lowest since the pandemic struck, but January saw companies reduce headcounts at a quicker rate - albeit less so than seen between March and November. The steepest loss of jobs was recorded in the hotels, restaurants, travel and leisure sectors. 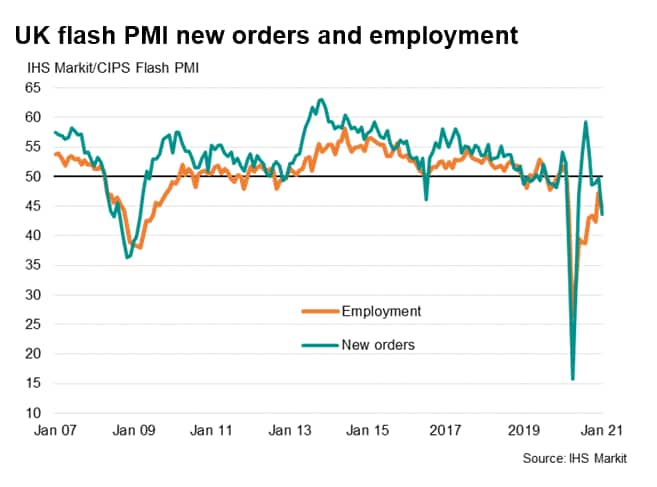 Lockdown restrictions bite less than before

Lower output and falling demand was widely blamed on rising virus infections and a tightening of COVID-19 lockdown measures. Recent days have seen daily COVID-19 deaths rise to the highest yet recorded in the UK, and January saw a new national lockdown introduced in England, accompanying similar strict measures in the rest of the UK. This lockdown replaced a tiered system of local containment measures that had been in place in December, and now includes school closures. 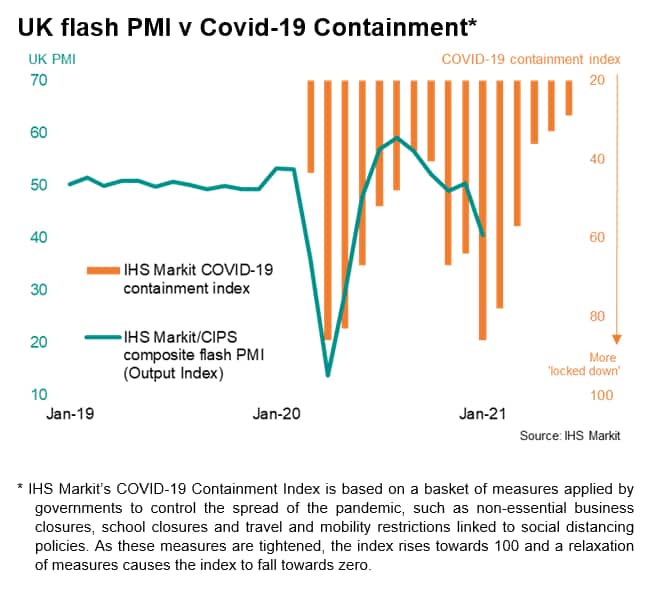 Importantly, unlike during the first wave of the pandemic in the spring of 2020, many parts of the economy have remained open, notably manufacturing and construction. Hence business activity has not fallen as sharply as seen during the first lockdown. The manufacturing output index in particular merely fell from 55.9 in December to 50.3 in January, remaining marginally in expansion territory. Although indicating a near-stalling of production growth, and the weakest expansion since the recovery began in June, this index remains far above the all-time low of 16.3 seen back in April.

Service sector hard hit, but less so than during first lockdown

There is also evidence to suggest that some companies - and households - have adapted their behaviour to better cope with COVID-19 restrictions, meaning the recent impact on the service sector has also so far been more muted than seen during the first lockdown. The service sector activity index fell from 49.4 in December to 38.8 in January, indicating the steepest contraction since last May, but the current reading is considerably higher than the low of 13.4 seen back in April 2020.

Some of the service sectors hardest hit by the lockdown in early 2020, such as hotels, restaurants and other consumer-facing services, again reported especially steep downturns in January, but to lesser degrees than last April. Similarly, output fell sharply in transport services and financial services, and - to a lesser extent - business-to-business services, though in all cases less so than last April. 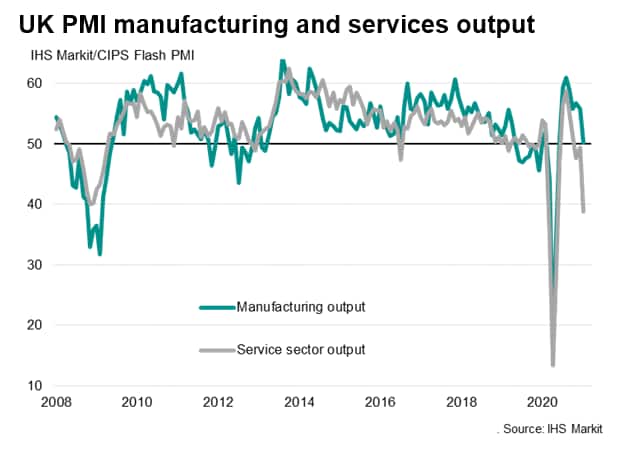 In addition to domestic demand being hit by new lockdown measures, both manufacturing and service sector companies saw exports fall in January, the former suffering the first such decline since July while service sector exports fell for the twelfth successive month, deteriorating at the fastest rate since last May. 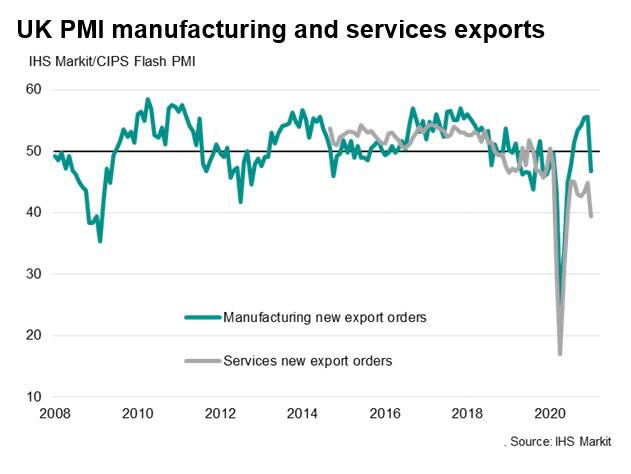 Export woes in part reflected falling demand overseas, in turn often linked to further virus infection waves, though also reflected a pay-back after pre-Brexit deal ordering boosted overseas sales in the lead up to the end of the Brexit transition period on 31st December, notably in manufacturing.

In the service sector, of those companies reporting lower overseas sales, 57% attributed the loss to COVID-19 while 40% blamed Brexit.

Brexit was also associated with a further lengthening of suppliers' delivery times, which exacerbated broader supply chain issues, including a worldwide shortage of shipping containers. January consequently saw the second-greatest lengthening of suppliers' delivery times since the manufacturing PMI survey began almost 30 years ago, with the incidence of delays exceeded only by those seen last April, at the height of pandemic-related global factory closures. 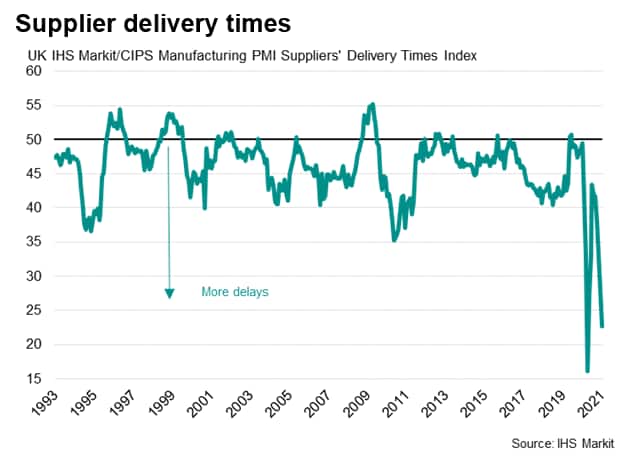 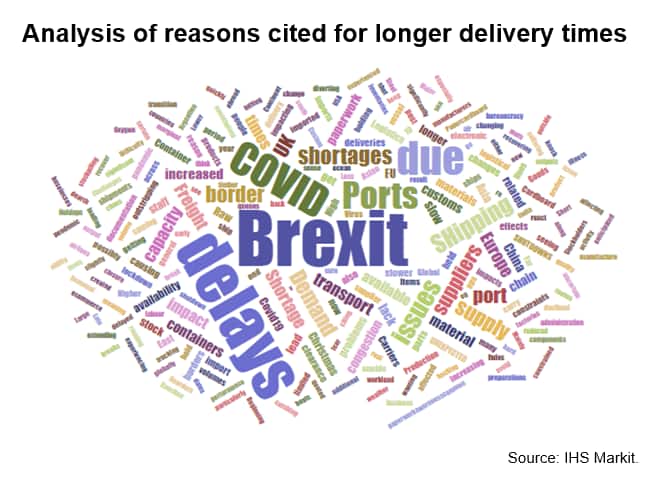 Supplier price hikes and additional shipping fees led to further upward pressure on manufacturers' input prices, which rose in January at the sharpest rate for almost four years. Input costs in the service sector rose at a slower rate, however, mainly reflecting lower staff costs. However, both sectors saw prices charged rise, with goods prices rising at the steepest rate since February 2018 as higher costs were passed on to customers, while a far more modest rise in service sector charges was nonetheless significant in being the quickest increase since the start of the pandemic. 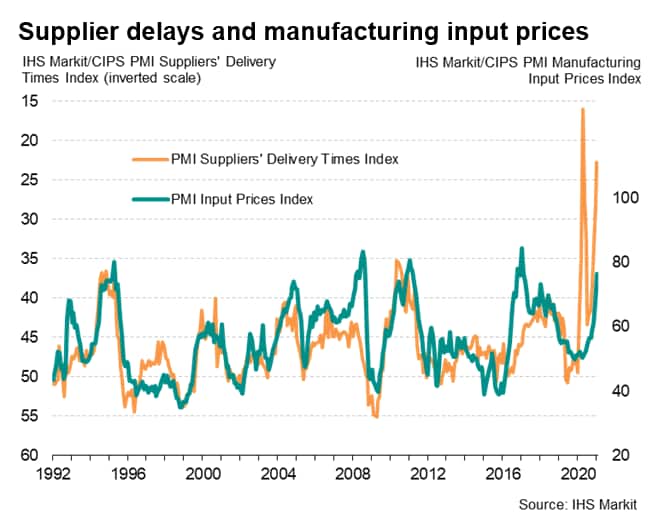 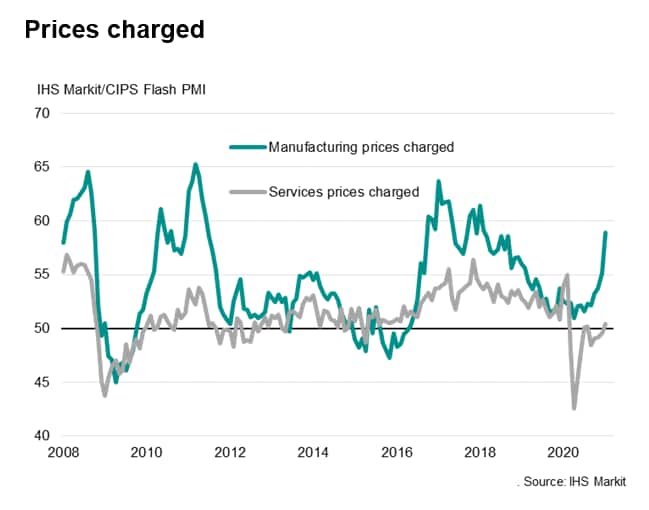 Finally, although businesses face a tough first quarter, prospects have brightened. The flash PMI index measuring business expectations for the next 12 months rose in January to the highest since May 2014. Continuing the trend seen in recent months, survey respondents overwhelmingly attributed their positive business expectations to a successful vaccine roll-out during 2021.